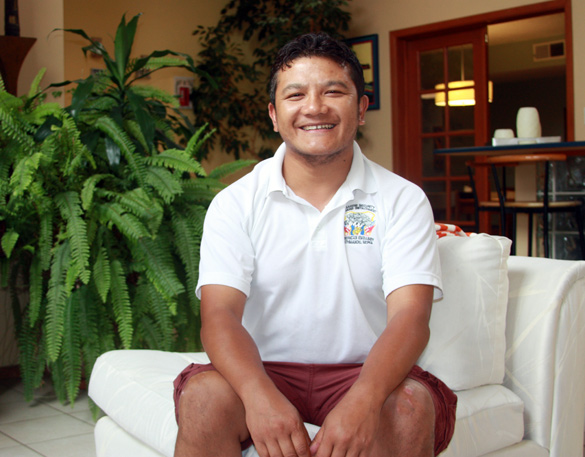 Phuri Kitar Sherpa is visiting Los Alamos as part of his third trip to the U.S.

Sherpa owns and operates Himalayan Friends Trekking in Kathmandu, Nepal and is in town visiting with the family of Odalyes Fernandez. Fernandez is the owner of Bilingual Montessori in White Rock.

“My daughter Diana lived in Nepal for four years and she and Phuri became friends,” Fernandez said. “I’ve trekked with his company in Nepal.”

“American friends wanted to share their culture with me,” Sherpa said.

Sherpa is both Phuri’s last name and the name of this ethnic group. Sherpas traditionally did not use last names, so census takers attached “Sherpa” as a surname to many people. Sherpas are renowned as mountaineers and trekkers.

Sherpa grew up in the village of Chourikharka in the Everest Region of Nepal and has been trekking and adventure traveling in Nepal since he was a child. Sherpa’s father also was a tour guide and began taking Phuri with him on treks when he was 12, he said.

By age 17, Sherpa was leading treks himself. He has been a guide for 14 years and started Himalayan Friends three years ago.

“We arrange everything,” Sherpa said. “From hotels to tents, we have a full range of tours and treks. We’ll arrange for porters and guides and for the seats at the finest restaurants in Kathmandu.”

The company offers everything from wildlife safaris in the southern Terai region, where visitors can see rhinos and elephants, to group treks or mountain climbing in the Himalayas. Tours can be organized for individuals or for groups and the staff of the U.S. Embassy often contracts with the company when family and friends visit them in Nepal.

When Fernandez was trekking with Himalayan Friends, her group got fogged in at a remote village. The company managed to find them a ride on a rescue helicopter back to Kathmandu. They waved goodbye to other tourists, who were not lucky enough to benefit from the connections enjoyed by Himalayan Friends, she said.

“Everyone is still sleeping in tents,” he said. “The tourism industry has been very negatively affected. If you want to help us, visit Nepal!”

Nepal is highly dependent on tourism.

“I want to thank the American people and the American government for helping the people of Nepal during this disaster,” Sherpa said.