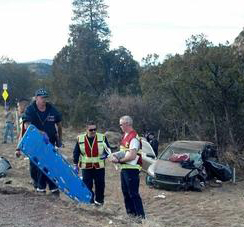 Capt. Adan Mendoza of the Santa Fe County Sheriff’s Office this evening released the names of the drivers involved in today’s fatal head-on collision on N.M. 4.

Jennifer Ventura-Trujillo, 41, of White Rock was driving a 4-door Honda sedan with a 13-year-old female passenger and a 14-year-old male passenger inside, he said.

The male passenger died from injuries sustained in the crash.

Mendoza explained that his office does not release the identity of minors.

“I will not identify either minor but I will say that the 13-year-old (14-year-old) male in the Honda who died was related to Jennifer Ventura-Trujillo,” Mendoza said. “Jennifer Ventura-Trujillo has been released from Los Alamos Medical Center. The 13-year-old female passenger was air-lifted this afternoon to the University of New Mexico Hospital in Albuquerque with serious injuries.”

Dennis Bernal, 43, of Santa Fe was driving the Toyota pickup that collided with Ventura-Trujillo’s Honda near the White Rock “Y” on N.M. 4, Mendoza said.

The accident was reported at 2:41 p.m. today, he said, and the Santa Fe County Sheriff’s Office “Fatal Crash Team” was on scene for several hours investigating the cause of the crash.

“We are still trying to determine what, if any, charges will be filed,” Mendoza said.