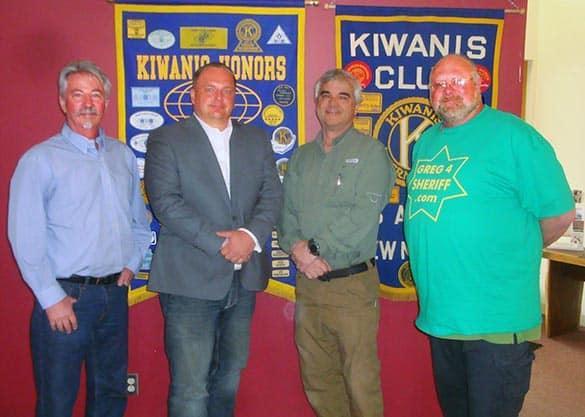 The sheriff’s race this year is an important one because the Sheriff’s Department and the County Council have for months been locked in a struggle involving the size, duties, budget—and even continued existence—of the department.

At one point in the struggle, the council stripped the department of most of its staff and budget and then went to a public vote seeking dissolution of the department.

However, the public voted to keep the department.

And subsequent court action has held that, under state law—which has precedence over county law—the county must have a sheriff’s department. The department may not have law enforcement duties, but it may perform “statutory and customary duties other than law enforcement.”  And the county may not eliminate the Sheriff’s Office by failing to fund it.

Kiwanis gave each of the four candidates five minutes to answer three questions:

Kiwanis drew names to determine speaking order. White spoke first; Whitehead second; Granville third, and Luchini fourth. When all of them had spoken, Kiwanis devoted a few moments to questions and answers from the floor.

Following are brief summaries of the four candidates’ statements, amplified by information from handouts that they left on a table provided for candidate literature.

White opened his presentation by saying, “I really  care about this town and its people.” His campaign website, greg4sheriff.com, and his campaign literature say that he has a degree in psychology, and is a veteran of the U.S. Coast Guard, a former paralegal in the U.S. Air Force, and a former casino security officer in Las Vegas, Nev., where, he says, one of his duties was investigating and arresting pedophiles.

In answer to Kiwanis Question 1, he listed four duties: maintenance of a sex-offender registry for the county; and, for the state—serving documents, transferring prisoners, and providing court security. He said that at present, the Los Alamos Police Department is handling prisoner transfer, and he would continue this practice. He also commented that, as he sees it, “We’re paying an outrageous amount for court security at this time.”

In answer to Question 2, he said he would propose a sheriff, an undersheriff, and three part-time deputies, with a negotiable budget of approximately $146,000 per year.

A one-page summary of his budget proposal, provided on the Kiwanis candidate-literature table, showed these budgetary details:

In response to Question 3, he commented that after the election, there will be new people on the County Council, and he hopes that they can implement what the courts have ordered and get the duties of the Sheriff’s Office into the Los Alamos County Charter.

Whitehead, whose website is at whitehead4sheriff.com , is a U.S. Army veteran, holds a bachelor’s degree in science from Oklahoma State University, is a former deputy fire marshal for Raleigh, N.C., and is now employed by Los Alamos National Laboratory as a design engineer.

In response to Question 1, he said the Sheriff’s Department should “perform the duties and exercise the powers” specified by the County Charter.

Moving on to Question 2, he said that the budget should be addressed when the County Council reviews the entire budget. Once the duties of the department are specified, the budget for the staff can be determined.

Answering Question 3, he said that the upcoming General Election will produce new county councilors and a new sheriff. That means “an opportunity to move forward … once the appeals process is complete.”

In his literature, Whitehead contends that the Police Department’s numbers (reported to the state) on violent crime in Los Alamos County are too high. He also says that the County Council has overstepped its authority, and that it “must now recognize the will of the people by properly funding the Office of Sheriff, returning to this office the duties and powers granted by state statute and the Constitution of New Mexico.”

He quotes The Federalist Papers (James Madison) as saying, “The separation of powers doctrine is necessary because of the political truth that the accumulation of all governmental powers in the same hands can lead to tyranny.” And he adds, “I think that it is time to remove unchecked executive powers that the County Council has obtained. The check on that power is a sheriff who answers directly to the electorate and not the County Council.”

Granville owns Home Improved USA, a small business in Los Alamos. He and his wife have a five-year-old son. He serves on the Board of Directors of Little Forest Playschool and the board of the Los Alamos Family Council.

He is a first-time candidate, and he said he has found campaigning an “interesting process” in which he has had many conversations with many people in the community.

In response to Question 1, he said the Sheriff’s Office should serve papers, keep the sex registry, and, for any other activities, communicate and work collaboratively with the County Council and the Police Department.

His answer to Question 2 was that the department size and budget should support doing the work of the department, including maintaining the sex registry. He spoke of adding one person to help the sheriff, and he commented that the $40 fee to serve papers should be enough to support that activity.

In answer to Question 3, he said he would “focus on clearly defining the duties of the sheriff—with the council and with the Police Department.” He  emphasized that he is “dedicated to working collaboratively.”

He told the Los Alamos Daily Post, in an interview last March, “I decided to run for office because I believe we have an opportunity to use the Sheriff’s Office to help vulnerable members of our community avoid becoming entrenched in the criminal justice system. I believe the office is less about law enforcement and more about crime prevention. As an elected official,” he said, “our sheriff must act as a liaison between law enforcement, (the) County Council, social services, our non-profits, and our citizen stakeholders to build collaboratively created solutions that improve the safety and well-being of our community in thoughtful, fiscally responsible, and caring ways.”

He noted that the voters are frustrated with the “negativity” of the current situation. He added that the next sheriff must “be a person adept at dealing with uncertainty.”

Chris Luchini, who holds a doctorate in high energy physics, has been registered as a Libertarian since the mid-1980s. He has been very active in both the New Mexico and the Los Alamos Libertarian parties.

His answer to Question 1 was that the duties of the Los Alamos County Sheriff’s Department should be “whatever state law says they are.”

At first, he said, he thought perhaps the Sheriff’s Department should take over the Police Department, but he is no longer pushing that point of view because it is “procedurally premature” and would be very difficult to achieve.

In response to Question 2, he said that the county hasn’t yet returned certain responsibilities to the sheriff, and, as a result, the $15,000 per year the department is now receiving might be “appropriate.”

If elected, he would appoint an undersheriff, but  that person could be a member of the Police Department. He said he would donate his own $6,000 to $7,000 salary to a worthy cause.

And Question 3? He said the relationship between the Sheriff’s Department and the County Council should be “adult, rational, calm, and collaborative. Not contentious.”  And he noted that after the upcoming election, new people would be serving on the council, and a new sheriff would be in office.

Only a few moments remained for questions and answers after all of the candidates had spoken.

The first question was how the candidates first became aware of the differences between the Sheriff’s Department and the County Council.

Luchini said he started hearing about the differences during public meetings before the County Council as much as five or six years ago.

Whitehead said he became aware of the clash in May 2016 when Sheriff Marco Lucero, whom he supported, was stripped of his duties and budget. Whitehead and his friends ordered some signs supporting the Sheriff’s Office. Whitehead said that in asking the public to vote to eliminate the Sheriff’s Department, the councilors were causing serious consequences. He said, for example, that sex offenders are required to register with the sheriff in the communities in which they reside. No sheriff, no registration….

White said, “I’m really not a politician.” However, he said. he became aware of the issues when Councilor David Izraelevitz started writing to the  newspapers, “trying to do away with the sheriff.” White said he knew the damage that such a move would do to the sex registry requirement. He also noted that the Legislature had specifically prohibited home-rule municipalities from making such changes. And, he said, he was aware that there were already several statutes on the books prohibiting Los Alamos from getting rid of its sheriff.

Granville said he “read it in the newspaper.”

The second question from the floor was how each candidate voted when the proposal to abolish the Sheriff’s Department went to a public vote.

Luchini and Whitehead both said they voted for keeping the department.

White said, “Unfortunately, I did not vote in that election.” He was in a Houston hospital under treatment for a severe infection in his arms and legs. He said that at the time, he was afraid he might lose his legs.

The third and final question was, “Why do you want to be sheriff?”

Granville said, “I thought this was an opportunity for me to step in and employ ‘positive problem solving.’” He was disturbed by seeing a breakdown in a community that normally “cares about each other.” He said he wanted this to continue to be a “respectful community,” and he wanted to define the duties of the Sheriff’s Department in such a way that the community would no longer be troubled by contentious clashes.

Whitehead said, “I really don’t want to be sheriff.” He said he ran because, at the time when he made his decision, he didn’t feel that the two people running could do as well as he could. He was also worried that certain councilors were trying to place someone in office who would support their position.

White said his major reason for running was “to preserve my right—and your rights—to have an elected official.” It was clear to him, he said, that the Legislature had made the position of sheriff mandatory.

Luchini said he was concerned that if someone who didn’t believe in the Sheriff’s Department was elected, then the office would be destroyed. He said he believes that, “I am the person who has the temperament” to make the department successful and financially efficient. He said he also believes that the county had “overstepped its bounds.”