SFNF: Come On Folks, Please Put Out Your Campfires! 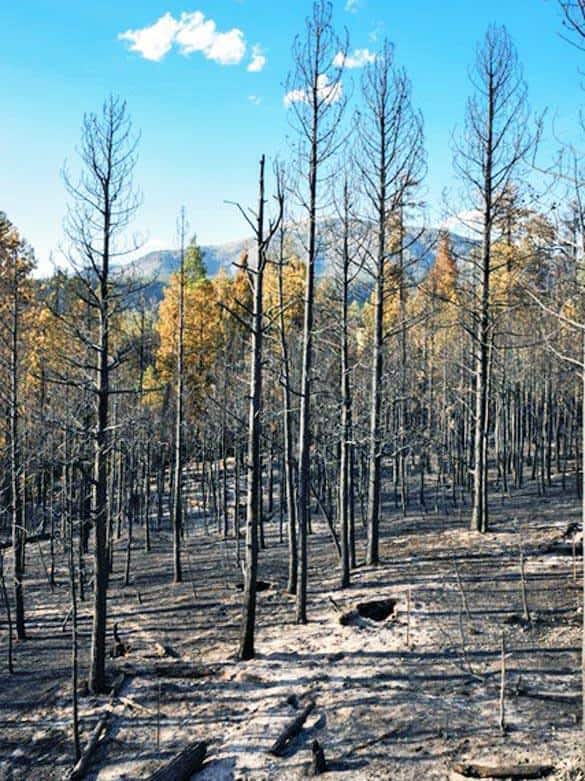 Remains of the Cajete Fire. Crews on patrol Saturday and Sunday came across 35 abandoned campfires on the Jemez District and another 10 on the Pecos/Las Vegas side of the forest. Courtesy/SFNF

And that doesn’t include the one last week near Forest Road 10 on the Jemez Ranger District that grew into a 2-acre wildfire before three engine crews successfully put it out.

Most of the abandoned campfires – still the leading human cause of wildfire – are found at dispersed campsites on the Jemez and Pecos/Las Vegas Ranger Districts, both popular weekend destinations for campers.

Crews on patrol Saturday and Sunday came across 35 abandoned campfires on the Jemez District and another 10 on the Pecos/Las Vegas side of the forest. Fire and recreation staff working in the field are also seeing illegal campfire rings.

The upcoming Fourth of July holiday, with its expected surge in the number of visitors on the forest, has fire personnel on the SFNF worried.

Although Northern New Mexico has seen good precipitation through the winter and spring, conditions are drying on the SFNF, and fire managers point out that it only takes one abandoned campfire in the wrong place to put human lives, natural resources and property at risk.

The SFNF has been conducting a public awareness campaign both online and in person, handing out brochures and posting flyers at campsites, to help educate people on the proper way to start and – more importantly – put out a campfire.

While the vast majority of forest visitors camp responsibly, the handful that do not put the forest and surrounding communities in harm’s way.

If you plan to gather family and friends around a campfire, do it safely by following Smokey Bear’s campfire safety procedures. If you need a visual, watch this Forest Service video on YouTube.

Never leave your campsite until the fire is completely extinguished and cold to the touch. Visitors are reminded that fireworks and explosives are always prohibited on federal lands.

There are seven active wildfires in New Mexico, totaling 18,444 acres with more than 625 personnel on scene. New Mexico also has seen smoke impacts from the 123,263-acre Woodbury Fire on the Tonto National Forest in Arizona.

The New Mexico fire season may be later than usual this year, but it’s here now … so please don’t be the one who makes it worse by abandoning a still-burning campfire.