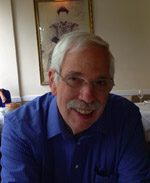 Darryl Holm, Imperial College London
SFI News:
The Santa Fe Institute (SFI) holds seminar “Space-Time Dynamics of Uncertainty and Nonlinearity: Modelling the unknown unknowns” with Darryl Holm at 12:15 p.m., Tuesday Sept. 22, at Collins Conference Room.
Abstract: Suppose you knew the basic physics underlying a nonlinear complex system, and your measurements of its behavior showed significant variability in space and time. (If you wish, think of the weather record in the Northern New Mexico region during your lifetime.)
Suppose also that the data you had for it was incomplete. That is, the data you had was not enough to specify all the information needed to predict the future evolution of your system using your basic physics equations.
How will you model its unknown unknowns?
Suppose your data had some noisy-looking, complicated, small-scale motions (variability); but it also had some large-scale spatial correlations, as seen, for example, in the Figure below showing thirty years worth of satellite measurements of the paths of drifters in the Pacific Ocean in the region between Australia and New Zealand.
How could you modify your deterministic basic physics equations to incorporate into them the randomness and statistics you have seen in your data; so that numerical simulations of your modified equations would reproduce the same sort of randomness and statistics as seen in your data?
Hint: you would need to do it in an optimal way, so that some kind of variational principle would be needed, and you would need to constrain your variations to be consistent with the statistics of your data.
This talk will discuss the concepts underlying one approach to solving such problems, in examples ranging from wobbling rotating bodies, to realistic models of geophysical fluid dynamics.
SFI Host: Geoffrey West
Click here to view the online event listing.
Menu
LOS ALAMOS