SFI: ‘Limits Of Computers In Science And Society’ 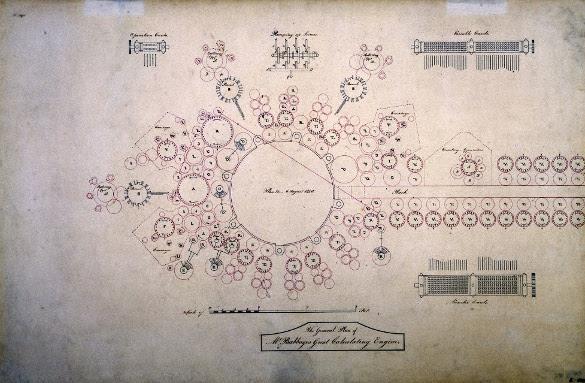 Plans for Charles Babbage’s analytical engine. Courtesy photo
SFI News:
Stanislaw Ulam Memorial Lecture Series: “Limits of Computers in Science and Society” with Cristopher Moore, Santa Fe Institute at 7:30 p.m., Monday Sept. 24 and Tuesday Sept. 25, at the Lensic Performing Arts Center 211 W. San Francisco St. Santa Fe, NM.
The Limits of Computers in Science and Society
Computers, algorithms, and artificial intelligence have touched every aspect of our society, from science, to communication, to the justice system. But despite
their enormous power, computers have fundamental limits – problems that no program can solve, and thorny issues in fairness and human rights. During the 26th year of the popular Ulam Lecture Series, SFI Professor Cristopher Moore looks at two sides of computation – the mathematical structures that make problems easy or hard, and the growing debate about fairness in algorithmic predictions. This is the first of two lectures presented as part of SFI’s Annual Stanislaw Ulam Memorial Lecture Series. These two lectures are self-contained, and can be enjoyed together or separately.
Lecture 1: Easy, Hard, and Impossible Problems: The Limits of Computation.
Monday, September 24, 7:30 pm
Every day we ask computers to solve problems for us – to find the fastest route across town, the shape a protein folds into, or a proof for an unsolved mathematical question. For all these problems, the space of possible solutions is vast. Why is that for some problems, we can quickly zoom in on the solution, while for others it’s like looking for a needle in a haystack? What is is about the structure of a problem that makes it easy, or hard, or even impossible to solve? Moore will draw analogies between computation and evolution, and take us from the simple puzzles to the heights of universal computation, Turing’s halting problem, and the nature of mathematical truth and creativity.
Tickets for this first lecture are available here.
Lecture 2: Data, Algorithms, Justice and Fairness.
Tuesday, September 26, 7:30 pm
What Algorithms are being used to decide whether defendants will show up for court, whether they should be released on bail, and whether they will be good citizens if they are given parole. How accurate are these algorithms? What data are they based on? And how fair are they to different subgroups of the population? Over the past few years, a controversy has erupted over the issue of algorithmic fairness – whether these algorithms treat some people differently than others. Professor Moore will lead us through how these algorithms work, what they are based on, and how “fairness” and “accuracy” are slippery terms. Can decisions made by AI be explained to the humans affected by them? What recourse do we have if we disagree with them? Will algorithms help us move forward to a better future, or will they encode and enshrine the biases of the past?
Tickets for this second lecture are available here.
Cristopher Moore is a professor at the Santa Fe Institute where he works on problems at the interface of mathematics, computer science, and physics. The co-author of The Nature of Computation (Oxford University Press), a classic textbook in modern mathematics, Moore has also written more than 150 scientific papers on topics ranging from quantum computing to the theory of social networks. Moore is an elected fellow of the American Association for the Advancement of Science, the American Physical Society, and the American Mathematical Society. He served on the Santa Fe City Council from 1994-2002.
Seating for SFI’s community lectures is limited and ticket reservations are required. Reserve your free tickets through The Lensic Box Office online or call 505.988.1234.
The Santa Fe Institute Community Lecture Series is generously underwritten by Thornburg Investment Management, with additional support from The Lensic Performing Arts Center and Enterprise Holdings Foundation.
LOS ALAMOS