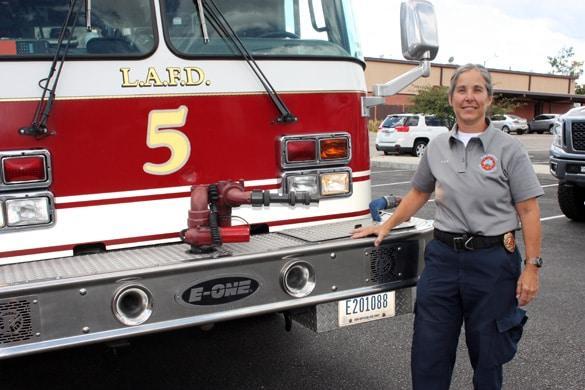 Wendy Servey has worn a lot of hats during the 12 years she has worked for the Los Alamos Fire Department. Five weeks ago she received a new one: Fire Marshal.

It’s not just a new hat she has earned but a major milestone. Servey is the first female Fire Marshal in the Los Alamos Fire Department.

“I’m just trying to build off his platform and continue the good work he set forth,” Servey said.

Fire Chief Troy Hughes describes Servey as a “rock star” in the department who likes to take on challenges and her new position allows her to expand her abilities in the fire department.

“We’re excited to have Wendy come over to take this position … we think she will do well and we’re glad to have her at the Los Alamos Fire Department,” Hughes said.

As Fire Marshal, Servey said she and her team inspect some 700-800 businesses, entities and organizations in the County for fire and life safety. Life safety includes having exists easily accessible, checking general fire hazards, fire alarm and sprinkler systems and fire department access.

What they look for during inspections are taken from the National Fire Protection Association (NFPA), which is NFPA-1 and NFPA 101. These two documents, which reference others as guiding documents, are standards adopted by county ordinance as its fire code.

Servey said the standards contain the minimum consensus codes for fire and life safety. If during an inspection, something is discovered that goes against the codes, Servey said she will utilize education to solve the issue, before enforcement unless the violation is an immediate life threat.

“It all comes down to education,” Servey said.

After an inspection, the property owner will be sent an electronic copy of the report and if there are any problems, the fire department will return in 30 days to do a reinspection.

“Usually most people are pretty good about it (and fix the problems),” Servey said.

In addition to inspections, Servey said her division also oversees fire investigations as well as reviews building plans for new construction or remodels. She explained in reviewing plans, the Fire Marshal’s focus is on fire and life safety features such as sprinkler coverage, exit signs and lighting, alarms systems and egress travel paths and distance and capacity.

Although she is relatively new to the position, Servey said she is enjoying the work.

“I’ve been pleasantly surprised,” she said. “I’m learning something new every day, which I enjoy and view as a challenge.”

Servey joined LAFD in 2006. During that time, she was promoted to Captain then Battalion Chief before becoming the Fire Marshal. The opportunities the fire department offers are one of things she said she appreciates the most about it.

“The department brings a lot of opportunities. We have a lot of resources here,” Servey said.

LAFD participates in trainings both locally and outside the department, she said, such as the Fire Department Instructors Conference (FDIC), and the National Fire Academy (NFA) or locally, the hazmat challenge and an instructor from the NFPA taught a certified fire inspector class this year, which was LANL-LAFD sponsored.

“We’ve sent a lot of people places, or brought instructors here so they can spread ideas,” Servey said.

It seems clear firefighting is a big passion for Servey. Even in her free time, she volunteers her services as District Chief for the Santa Fe County Fire Department. She describes it as her “fun job.”

Plus, Hughes said she is attending the Executive Fire Officer Program through the U.S. Fire Administration National Fire Academy.