Sen. Tom Udall
The 2013 National Defense Authorization Act (NDAA), which also includes Udall’s amendment to reform the National Nuclear Security Administration (NNSA), must now be cleared by the House of Representatives before being sent to the president for signature.
“This bill will ensure that New Mexico’s bases and laboratories remain strong and ready to support the nation’s security needs,” Udall said. “It also provides our service members with the tools necessary to carry out their missions and keeps our military at the forefront of developing new sources of energy.”

Sen. Jon Kyl
The measure contains an amendment sponsored by Udall and Sen. Jon Kyl, R-Ariz., to create an advisory panel that will evaluate the NNSA, which oversees Sandia National Laboratories and Los Alamos National Laboratory, and make recommendations for improvement.
“In light of cost overruns, security breaches and management issues over the last few years, this study is an important first step to improve the scientific work, safety and employee retention at our national laboratories.” 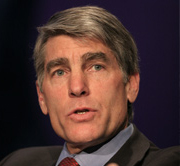 Sen. Mark Udall
Udall also joined forces with his cousin, Sen. Mark Udall of Colorado, on an amendment to help the Department of Defense continue to reduce our dependence on foreign oil with advanced biofuels, such as those being developed by companies in New Mexico.
It authorizes funding for New Mexico’s national laboratories, including $70,000,000 for the CMRR-NF at LANL. The current CMR facility is in a state of disrepair and will be decommissioned in 2019.
Udall has been working to ensure that our scientists and engineers have the necessary infrastructure to safely carry out their work after it closes.
The NDAA authorizes:
The NDAA appropriates annual funds for the Department of Defense, military construction and the defense activities of the Department of Energy to provide the resources, tools and talent needed to maintain a strong and flexible national defense at home and around the world.
Menu
LOS ALAMOS