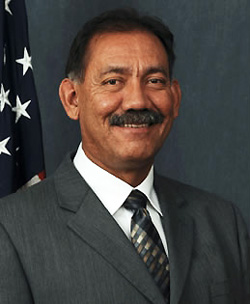 Estevan López
U.S. SENATE News:
WASHINGTON, D.C. – U.S. Senators Tom Udall and Martin Heinrich joined the Senate Tuesday in confirming Estevan López, a native New Mexican, as Commissioner of the Bureau of Reclamation.
López, who previously served as director of the New Mexico Interstate Stream Commission, replaces former Commissioner and fellow New Mexican, Michael Connor, who was confirmed as Deputy Secretary of the Department of Interior in February.
“Water is a defining issue in New Mexico and across the Western United States today, and the Bureau of Reclamation plays a critical role in meeting the water demands of the West, given competing needs and limited water resources,” Udall said. “As a veteran water manager with more than two decades of experience handling water issues in both the public and private sectors at the local and state level, Estevan López has a solid grasp of policy and a sharp intellect that will enable him to successfully step into the vital role of Commissioner at the Bureau of Reclamation. Estevan has worked under both Republican and Democratic administrations in New Mexico, and demonstrated his great ability to work with diverse groups to find solutions to complex issues. He has a deep-rooted desire to solve water problems, and I look forward to working with him to address the immense challenges facing New Mexico and the West.”
“The Bureau of Reclamation is at the center of managing a variety of interests to address our nation’s water needs. With important water projects across the West that affect our communities, tribes, local farmers, and wildlife habitat, we need a skilled commissioner at the helm,” Heinrich said. “Estevan López’s experience as a water manager in New Mexico gives him the keen understanding needed to tackle our most pressing water issues, such as severe drought, devastating floods, and the need for smart water management into the future. I look forward to working with Mr. López to support New Mexico’s critical water projects.”
López currently serves as the principal deputy commissioner of Reclamation, where he manages the bureau’s day-to-day operations. With a $1 billion annual budget, the Bureau of Reclamation manages, develops and protects water and related resources. It is the largest wholesale water supplier in the United States, and the second largest producer of hydroelectric power. The bureau has led water projects such as the construction of dams, power plants and canals in 17 Western states, and delivers 10 trillion gallons of water to more than 31 million people each year. Reclamation also supports the conservation and efficient use of water along with research and development of key water technologies.
Governor Bill Richardson in 2003 appointed López to be director of the New Mexico Interstate Stream Commission. López also served as the deputy state engineer for New Mexico. In addition, he is a member of the Governor’s Blue Ribbon Task Force on Water Issues and is the chairman of the Water Cabinet, which Richardson created by executive order in 2007. He also represented New Mexico on water related issues in the New Mexico/Chihuahua Commission and on the U.S./Mexico Border Governors Conference.
Previously, López served as county manager for Santa Fe County from 2001-2003 and as land use and utility director for Santa Fe County from 1997-2001. He also worked for the New Mexico Public Utility Commission from 1990-1997. López is a registered professional engineer in New Mexico. He has Bachelor of Science degrees in chemistry and in petroleum engineering from New Mexico Tech.
Menu
LOS ALAMOS