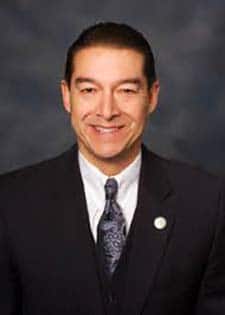 New Mexico senators approved a new measure today that would allow independent voters to cast ballots in primary elections by registering with a major party on Election Day, potentially opening up primaries to a wider swath of the population.

The surprise amendment was added to an elections reform bill that aims to streamline the voting-by-mail process if the COVID-19 pandemic is still ongoing during November’s general election.

The amendment, which was proposed by Sen. John Sapien and passed with bipartisan support, would allow voters not registered with a major party to affiliate with one when they arrive at polling stations to vote.

Sen. Daniel Ivey-Soto, who was the lead sponsor on the main bill, said the change would prevent situations that take place under current law, in which voters unaffiliated with a major party arrive to vote in primaries but aren’t able to.

“Right now, you’ve got people who in their mind affiliate a certain way, who may want to show up to vote but right now their only option is to be turned away,” said Ivey-Soto, D-Albuquerque.

Under the amended bill, those voters would be able to choose whether they want to register on the spot, he said.

“Any place where the voter can make their own choice, I think that’s a good thing,” he added.

“There’s a large section of the populace right now that doesn’t get to participate in our primaries,” said Baca, who voted for the amendment. “So that was the real push behind it.”

He added that voters who pay for election administration costs through their tax dollars should be able to participate in primaries.

“Everybody in the state pays for elections, yet a section of people are not allowed to vote in those elections,” he said.

The chamber passed the overall elections bill by a vote of 40-2, and it will now move to the House.

The bill, however, was diluted late Thursday by a Senate committee that voted to strike a provision that would have allowed county clerks to automatically send mail-in ballots to registered voters without requiring people to request them.

Two Democrats on the committee, President Pro Tem Mary Kay Papen and Sen. Clemente Sanchez, voted with the Republicans, giving the amendment a narrow victory in the Senate Rules Committee.

Should the bill become law, it would be temporary and would be repealed at the end of 2020.

The amendment pertaining to primaries would be permanent, however.

The bill was proposed after county clerks were overwhelmed by the huge volume of absentee ballots they received during this month’s primary election, leading to long delays in tallying results in several areas of the state.