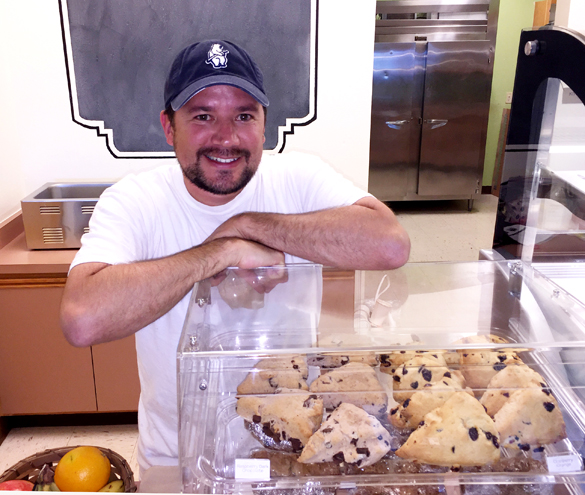 It has been about three years since the aroma of fresh coffee and food filled the Student Center on the UNM-Los Alamos campus.

This year, the decision was made to bring a grab-and-go food service to campus based on requests from students, faculty and staff. After considering several proposals, Jeremy Varela and his local Secret City Kitchen business were selected to serve the campus.

“One of our goals is to have a ‘vibrant campus environment,’ UNM-LA CEO Dr. Cindy Rooney said. “We have growing student enrollment and an increased number of community events taking place on campus, so we made it a priority to bring a food service back to the Student Center. We are delighted with the plans that were proposed by Secret City Kitchen and look forward to working with Jeremy and his team to make this a successful endeavor.”

Last Thursday, Varela, along with Violet Starr, began serving breakfast and lunch items, as well as coffee drinks and scones. Customers gave the food great reviews. From breakfast burritos and scones to salads and sandwiches, the food was described as delicious and fresh. The customers included several community members in addition to the UNM-LA students, faculty and staff.

At this point, Head Prep Cook Tito Hinojosa and Chef Sanaa Ahmed prepare most items in Varela’s commercial kitchen in Quemazon to serve on campus, while Varela and Starr grill sandwiches at the college on a Panini grill. Long term plans include beginning to use the adjacent kitchen area at UNM-LA and expanding the menu. Varela also has thoughts about turning the back part of the kitchen into a classroom, and teaching culinary skills and restaurant management skills.

Each week Varela offers a different meal, with the menu for the month posted on his website secretcitykitchen.com. Meals for a family of four are delivered to homes in Los Alamos or available for pickup for those who live off the hill. Last February, the Secret City Kitchen began making pies for the Los Alamos Coop as well. Around that time, professionally trained chef Eli Byerly joined Varela. Although she was only with Secret City Kitchen for a short time before she left town, she transformed the menu.

Late last spring, Chef Ahmed joined the team, assisting Varela with an addition to his service, tapas sold at the free Friday night concerts at Ashley Pond. This evolved into Tapas Tuesdays at projectY after the concert series ended, which continued for a short while until Varela began planning his next enterprise: developing a new food service for UNM-LA.

Secret City Kitchen at UNM-LA will operate 7 a.m. to 4 p.m., Monday through Friday. During Thanksgiving week, the restaurant will be open full days Monday and Tuesday, and a half day Wednesday. Varela invites members of the community to stop by and experience his food items in this new venue. Varela can be contacted at 505.819.2676.