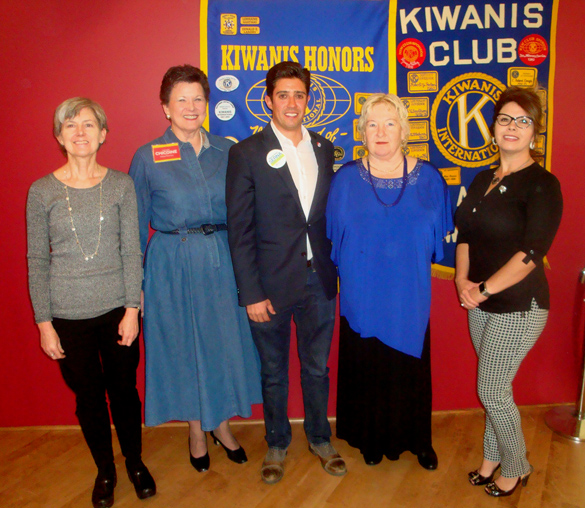 Each of the three Los Alamos candidates who attended was given three minutes to present their information to the voters.

Naomi Maestas has lived in New Mexico all her life. She and her husband and three children moved to Los Alamos County 14 years ago when her husband was offered a county job. Her children have attended Los Alamos schools. She said she loves this county, which she has found to be a “great community,” and she “wants to continue to give back.”

She noted that she is “very familiar” with the Los Alamos County Clerk’s Office because she has worked there for 10 years. “I have a heart and a passion for the office,” she said, especially for its work in the election process.

Maestas said she is proud to be working in a modern office—the first County Clerk’s Office in the state to offer many documents on line.

She noted that the work of the County Clerk’s Office now requires the attention of a full-time clerk. And she added that she believes in “democracy and fairness” and would apply those principles if elected to the office of county clerk. In her literature, she says she offers the county diligent dedication, community focus, unsurpassed vision, effective leadership, proven integrity, and invaluable experience.

Amy Woods said, “My roots are here in Los Alamos.” She noted that she is the daughter of the B.B. and Carlotta McInteer, long-time active Democrats in the county (both now deceased).

She noted that her background includes service on the Planning and Zoning Commission, as president of the Los Alamos Council on Cancer, and as secretary of the Pajarito Acres Homeowners Association.

She has a “30-year history in management and technology,” including a bachelor’s degree in business systems from Syracuse University, a master of business administration from Anna Maria College (a Catholic college in Massachusetts that offers online programs and is regionally accredited by the New England Association of Schools and Colleges), and 12 years in management positions with Werner, IBM, and Data General. She is currently a real estate broker. Knowledge from all of this experience, she said, is useful in understanding the value of accurate records and good customer service and in providing familiarity with databases.

She said she has an excellent knowledge base to bring to the office. She would like to improve accuracy, help high-needs voters, and bring young people into the system early. In her literature, she says, “She sees the clerk’s role as that of facilitator and manager. Her priorities include outreach to the community, especially to new/young voters; providing tools and support to the excellent staff in the clerk’s office; and smart use of technology for improved customer service.”

After the two county clerk candidates had spoken, they were both asked whether they see the role of the county clerk as including efforts to get more people to vote. Essentially, they agreed.

Maestas said she sees the job as including such a role. The county clerk goes out to the public schools to educate future voters, collaborates with the League of Women Voters in its informational efforts, and works with other organizations to get out the word on how and where to vote. She said the office currently has “great relations” with the local media.

Woods said, “Yes. We must get more people involved.” She said she would go out to schools “as early as possible.” She favors the availability of civics and government classes, and she would “introduce more technology into the process.” She mentioned a possible informational role for iPhones.

Anne Nobile is an Independent who stepped in when the previous probate judge left the office. She has a bachelor’s degree, experience as a member and chairwoman of the Planning and Zoning Commission, and 25 years as a resident and frequent volunteer in Los Alamos County.

She told Kiwanis that in January this year, she began to see that, “There might be an opening” developing in the office of probate judge. She said she went to the office to get a first-hand view of the workflow, “to get an idea of the kind of work that goes into the job.”

She was appointed to the position in June.

She said she knows that if she is elected, she will need a fuller understanding of the job, and, she said, “I intend to grow in the job.”

Asked whether she would pledge to stay in the job until the end of the term, she said, “Yes—four years!”

A Question for All Three

All three local-office candidates were asked whether they would want to continue the active participation in the New Mexico Association of Counties that has been a hallmark of Sharon Stover’s time as county clerk.

Maestas said she would “definitely continue” Los Alamos County participation. “We can learn from each other,” she said of working with the other counties. She added that the association offers a “great opportunity.” She would like to collaborate with clerks from other counties to develop a uniform approach in “gray areas.”

Woods agreed. She said she wants to “make sure we’re in compliance and uniform.”

Nobile said that right now, she knows only a little about the association, but she promised to pursue the issue, and she said she admires the work that Stover has done with the association.

Both DA Candidates Participate in Forum

The second of four Los Alamos Kiwanis election forums this month also drew both the Republican and the Democratic candidates for District Attorney in the First Judicial District, which includes Los Alamos, Santa Fe and Rio Arriba Counties.

The candidates were given three minutes each to present their backgrounds, motivations, and views. A question-and-answer session after they had each spoken clarified their differences.

Yvonne Chicoine, the Republican, spoke first. She didn’t become a lawyer until she was 50. Her bachelor’s degree was in international relations, and she spent almost 20 years in Washington, D.C., and New York City doing state, national, and international public policy work. She moved to Santa Fe County after she married Tom Starke in 1995, and subsequently earned a law degree from the University of New Mexico in 2007. She worked in the First Judicial District Attorney’s Office from 2007 to 2011, prosecuting a wide variety of criminal and white collar offenses. She served as an assistant attorney general from 2011 until 2016.

She emphasized that, in her view, the District Attorney must be “committed to the rule of law.” Citizens have a right to know that they are safe from violent criminals, intoxicated drivers and other offenders who can endanger their lives, she said. Citizens must be free to focus on their own lives and businesses—and the district attorney’s practices for four years in office can affect their safety.

She made it clear that she is deeply disturbed about what she sees as a pattern of “non-enforcement” of the law. She said that when the charges in DWI (driving while intoxicated) cases are pleaded down from second and third offenses to first offenses, this action “undermines the law,” which was established to provide escalating penalties for an increasing number of violations.

When the accused is allowed to plead down a domestic violence charge to disorderly conduct, she said, the counseling program is undermined.

Chicoine, a Santa Fe resident for many years now, said that it is “important to restore respect for law.” She would take a firm stand in such cases.

Marco Peter Serna, the Democrat seeking the district attorney office, was born in Albuquerque and grew up in Santa Fe, but spent a lot of time with family members in Española and Chama. He remembers coming to Los Alamos to ice skate. His background includes serving as a prosecutor in Valencia and Sandoval Counties. Recently, he has been working in the Attorney General’s Office, prosecuting Medicaid fraud and elder abuse. In 2013, he was named “Prosecutor of the Year for Domestic Violence” by the New Mexico Bar Association. He served as assistant attorney general, focusing on elder abuse and Medicaid fraud under Hector Balderas. He is a board member for the New Mexico Hispanic Bar Association.

He said, “I want to be tough on the law, but I also want to be smart on the law.” He said that in cases involving non-violent drug offenses, “Incarceration really isn’t working.” He would like to see treatment instead.

The law must be “strict” on repeat DWI offenders, he said, with “stiffer laws after three” violations.

In domestic violence cases, it’s important to “get them into treatment programs right away.”

During the question-and-answer session, both were asked questions that led to specific answers on how they would handle repeat violent offenders.

Chicoine said they “need to be dealt with harshly.” It’s important that they “go to trial,” she said. The law must focus on “crime drivers,” because, she said, these repeat offenders (about 5% of the population) are “responsible for a lot of our crime.” We need to focus on getting them off the street, she said. Probation, she added, is “an act of benevolence. Problem violators show that they are not worthy of our trust. Not jailing them sends a bad message.” She also called for clear documentation in cases against such people.

Serna said, “We do have victim advocates in the District Attorney’s Office,” and we must make sure that they are notified when violent repeat offenders are coming up for trial. He added that, “The discovery issue can make or break your case,” and, therefore, it is vital to have “great communication with the police.” He believes in creating a meeting schedule so that officers can plan to be at the trial, and, he said, the DA and the police should discuss “every single case” to be well prepared. There should be follow-up meetings when necessary to see that “no rock is left unturned” and promote “effective prosecution.” In the case of habitual offenders, he said, probation rules should be enforced, and cases should be well documented. However, he added that, “A lot of drug offenders are habitual, but they are not dangerous. We should try to get them into treatment and address the addiction.”