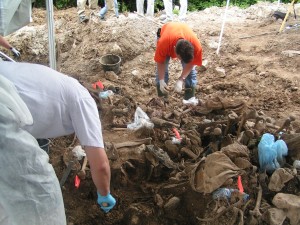 Workers examine remains at a mass grave in eastern Bosnia in 2004. Photo by Polargeo

Cancún, Mexico — It’s very hard to convict a murderer if the victim’s body can’t be found. And the best way to hide a body is to bury it.

Developing new tools to find those clandestine graves is the goal of a small community of researchers spread across several countries, some of whom are presenting their work on Tuesday, May 14, at the Meeting of the Americas in Cancún, Mexico, a scientific conference organized and co-sponsored by the American Geophysical Union.

“Nowadays, there are thousands of missing people around the world that could have been tortured and killed and buried in clandestine graves,” said Jamie Pringle, lecturer in geoscience at the School of Physical Sciences and Geography at Keele University in the U.K. “This is a huge problem for their families and governments that are responsible for the human rights for everybody. These people need to be found and the related crime cases need to be resolved.”

Mostly, people throw resources at the search for clandestine graves and try to see what works best, said Pringle. But he and his colleagues Carlos Molina and Orlando Hernandez of the National University of Colombia in Bogota are among those trying to refine the techniques for finding mass graves, so that eventually there might be a reliable toolkit for not only finding bodies, but discovering details like the time of deaths and burials–-all critical evidence for convicting murderers.

Previous studies on which Pringle has worked have involved simulated clandestine graves in the U.K. in which they buried pigs and then monitored soil gases, fluids and other physical changes over time. That research made it clear how much the detection of graves depends on understanding how corpses change in different soils and climates. This is being applied to active forensic cases throughout Europe.

International collaborations among forensic geophysicists have already proved helpful in cases such as the so-called IRA ‘Disappeared’ victims found on beaches in Northern Ireland and current work underway to detect Civil War mass graves in Spain.

In the latest project, being presented in a poster at the Cancún meeting, the researchers propose to bury pigs in eight different simulated clandestine mass grave scenarios in different soils and climates in Colombia. Then they will study the mass graves with geophysical methods like ground penetrating radar, electrical resistivity, conductivity and magnetometry among others. Their plan is to survey the graves every eight days during the first month, 15 days in the second and third months, and monthly until 18 months have passed.

The data they collect will be used to map the mass graves and compare them, adjusting for site variables like soil type and rainfall. They also expect to compare their results with other studies and forensic cases.