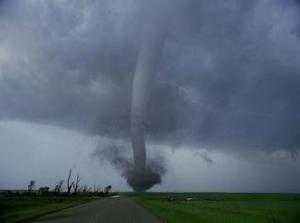 In the United States, most devastating tornadoes occur in Tornado Alley, which is a strip of land between the Appalachian Mountains and the Rocky Mountains, including most American Midwest states.

Scientists say that building three 300 meter high and 50 meter wide walls, at the cost of about $160 million each — the first close to the northern boundary of the Tornado Alley, maybe in North Dakota; the second one in the middle, maybe in the middle of Oklahoma and going to east; the third one in the south of Texas and Louisiana – would significantly reduce, if not eliminate altogether, the threat of devastating tornadoes in Tornado Alley.

The annually recurring devastating tornado attacks in U.S. Tornado Alley raise an important question: Can we eliminate the major tornado threat in Tornado Alley? Some people may claim that such a question is beyond imagination as people are powerless in facing violent tornadoes.

According to Professor Rongjia Tao’s recent publication in International Journal of Modern Physics B (IJMPB), however, human beings are not powerless on this issue: if three east-west great walls are built in Tornado Alley, they will eliminate major tornado threat there forever. These walls can be built locally at high tornado risk areas to eliminate tornado threat there first, then gradually extended.

Such violent vortexes, supercells, are initially in horizontal spinning motion at the lower atmosphere, then tilt as the air turns to rise in the storm’s updraft, creating a component of spin around a vertical axis. If the vortex stretching during the vortex tilting intensifies the vertical vorticity enough to create a tornado, the vortex size is getting much smaller as the rotation speed gets much faster. About 30 percent of supercells lead to tornadoes.

Calculations show that the chance to produce tornadoes depends on the wind speeds during the clashes. For example, if both cold wind and warm wind have speed 30 miles/h (13.3m/s), the chance to develop tornados from the clash is very high. On the other hand, if the both winds have speed below 15 miles/h, there is almost no chance for the clash to develop into tornadoes. Hence reducing the wind speed and eliminating the violent air mass clashes are the key to prevent tornado formation in Tornado Alley. Nature teaches us how to do so.

United States and China have similar geographic locations. In particular, the Northern China Plain and the Eastern China Plain is also in the zone of mixing, similar to Tornado Alley.

Very few violent tornadoes, however, occur in this region of China because there are three east-west mountain ranges to protect these plains from tornado threat. The first one is 300km long Yan Mountain which lies at the northern boundary of these plains. The second one is 600km long Nanling (Nan Mountains) at the south boundary of these plains. The third one is 800km long Jiang-Huai Hills through the middle of the plains. Especially, Jiang-Huai Hills are only about 300 meters above sea level, but effectively eliminate the major tornado threat for the areas. This is evidenced by the following fact.

Jiang-Huai Hills do not extend to Pacific ocean, leaving a small plain area, north part of Jiangsu province, unprotected. This small area, similar to U.S. Tornado Alley, has annually recurring tornado outbreaks. For example, the city Gaoyou in this area has a nickname “Tornado hometown,” which has tornado outbreaks once in two years on average. It is thus clear that Jiang-Huai Hills are extremely effectively in eliminating tornadoes formation. Without Jiang-Huai Hills, a quite big area in China would become “Tornado Hometown.”

While there are no mountains in Tornado Alley to play the same role as Jiang-Huai Hills in China, there are two small mountains, Ozarks Mountains and Shawnee Hills, which significantly reduce tornado risk for some local areas.

Ozark Mountain consists of high and deeply dissected plateaus; the mountain hills are south-north ranged. Most parts of these north-south hills cannot block or weaken air mass flow between north and south. Therefore, for example, Joplin, Missouri has very high tornado risk as it faces the north-south deeps and valleys formed by these hills, the winds get more strength as they pass these valleys and deeps. On the other hand, some small sections of St. Francois Mountains and Boston Mountains have the hills east-west connected. Therefore, for example, Rolla, Missouri has very low tornado risk, as analyzed by http://www.homefact.com/tornadoes/.

According to Dr. Tao, the above information learned from Nature is encouraging. Although there are no east-west mountains in Tornado Alley, some east-west great walls can be built to play the same role. Also learned from Jiang-Huai Hills and Shawnee Hills, the wall needs to be about 300 meter high and 50 meter wide.

The release notes that to eliminate the tornado threat for the entire Tornado Alley, there may be a need to build three great walls. The first one should be close to the northern boundary of the Tornado Alley, maybe in North Dakota. The second one should be in the middle, maybe in the middle of Oklahoma and going to east. The third one can be in the south of Texas and Louisiana.

Such great walls may affect the weather, but their effect on the weather will be minor, as evidenced by Shawnee Hills in Illinois. In fact, with scientific design, these walls may also be used to improve the local climate.

In Philadelphia, there is one skyscraper building, Comcast Center, about 300 meter high. From the cost of Comcast Center, it can be estimated that it would cost about $160 million to build such a wall. On the other hand, the damages caused by single tornado attack in Moore, Oklahoma on 20 May 2013 alone were in the multibillion dollars range. Therefore, it seems that the cost for building such a wall is affordable.

While building the three great walls will eventually eliminate major tornadoes in the entire Tornado Alley, we do not expect to start such a huge project in the near future. It is more realistic to build such great walls locally at high tornado risk areas first, then connect them piece by piece. To do so locally, it should be remembered that from air fluid dynamics, the area protected by the wall is roughly a circle with the wall as its diameter.

This research is supported in part by a grant from US Naval Research Lab.