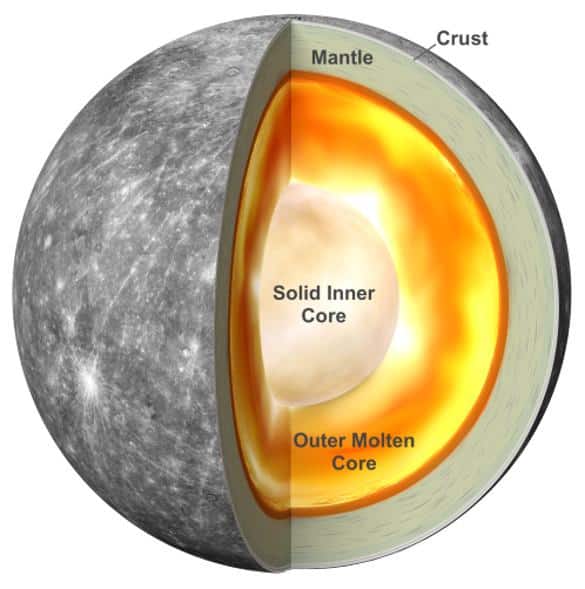 An illustration of Mercury’s interior based on new research that shows the planet has a solid inner core. Courtesy/Antonio Genova.
An artist’s concept of the interiors of Earth, Mars and Earth’s moon. New research shows Mercury has a solid inner core like Earth does. Courtesy/NASA/JPL-Caltech
AGU News:
WASHINGTON, D.C. — Scientists have long known that Earth and Mercury have metallic cores.
Like Earth, Mercury’s outer core is composed of liquid metal, but there have only been hints that Mercury’s innermost core is solid. Now, in a new study, scientists report evidence that Mercury’s inner core is indeed solid and that it is very nearly the same size as Earth’s solid inner core.
Some scientists compare Mercury to a cannonball because its metal core fills nearly 85 percent of the volume of the planet. This large core — huge compared to the other rocky planets in our solar system — has long been one of the most intriguing mysteries about Mercury.  Scientists had also wondered whether Mercury might have a solid inner core.
The findings of Mercury’s solid inner core, published in AGU’s journal Geophysical Research Letters, help scientists better understand Mercury but also offer clues about how the solar system formed and how rocky planets change over time.
“Mercury’s interior is still active, due to the molten core that powers the planet’s weak magnetic field, relative to Earth’s,” said Antonio Genova, an assistant professor at Sapienza University of Rome who led the research while at NASA Goddard Space Flight Center in Greenbelt, Maryland. “Mercury’s interior has cooled more rapidly than our planet’s. Mercury may help us predict how Earth’s magnetic field will change as the core cools.”
To figure out what Mercury’s core is made of, Genova and his colleagues had to get, figuratively, closer. The team used several observations from NASA’sMESSENGER mission to probe Mercury’s interior. The researchers looked, most importantly, at the planet’s spin and gravity.
The MESSENGER spacecraft entered orbit around Mercury in March 2011 and spent four years observing this nearest planet to our Sun until it was deliberately brought down to the planet’s surface in April 2015.
Scientists used radio observations from MESSENGER to determine Mercury’s gravitational anomalies (areas of local increases or decreases in mass) and the location of its rotational pole, which allowed them to understand the orientation of the planet.
Each planet spins on an axis, also known as the pole. Mercury spins much more slowly than Earth, with its day lasting about 58 Earth days. Scientists often use tiny variations in the way an object spins to reveal clues about its internal structure. In 2007, radar observations made from Earth revealed small shifts in Mercury’s spin, called librations, that proved some of the planet’s core must be liquid-molten metal. But observations of the spin rate alone were not sufficient to give a clear measurement of what the inner core was like. Could there be a solid core lurking underneath, scientists wondered?
Gravity can help answer that question. “Gravity is a powerful tool to look at the deep interior of a planet because it depends on the planet’s density structure,” said Sander Goossens, a researcher at NASA Goddard and co-author of the new study.
As MESSENGER orbited Mercury over the course of its mission and got closer and closer to the surface, scientists recorded how the spacecraft accelerated under the influence of the planet’s gravity. The density structure of a planet can create subtle changes in a spacecraft’s orbit. In the later parts of the mission, MESSENGER flew about 120 miles above the surface, and less than 65 miles during its last year. The final low-altitude orbits provided the best data yet and allowed for Genova and his team to make the most accurate measurements about the internal structure of Mercury yet taken.
Genova and his team put data from MESSENGER into a sophisticated computer program that allowed them to adjust parameters and figure out what the interior composition of Mercury must be like to match the way it spins and the way the spacecraft accelerated around it. The results showed that for the best match, Mercury must have a large, solid inner core. They estimated that the solid, iron core is about 1,260 miles (2,000 kilometers) wide and makes up about half of Mercury’s entire core (about 2,440 miles, or nearly 4,000 kilometers, wide). In contrast, Earth’s solid core is about 1,500 miles (2,400 kilometers) across, taking up a little more than a third of this planet’s entire core.
“We had to pull together information from many fields: geodesy, geochemistry, orbital mechanics and gravity to find out what Mercury’s internal structure must be,” said Erwan Mazarico, a planetary scientist at NASA Goddard and co-author of the new study.
The fact that scientists needed to get close to Mercury to find out more about its interior highlights the power of sending spacecraft to other worlds, according to the researchers. Such accurate measurements of Mercury’s spin and gravity were simply not possible to make from Earth. New discoveries about Mercury are practically guaranteed to be waiting in MESSENGER’s archives, with each discovery about our local planetary neighborhood giving us a better understanding of what lies beyond.
“Every new bit of information about our solar system helps us understand the larger universe,” Genova said.
Menu
Los Alamos
70°
Clear
5:48am8:23pm MDT
Feels like: 70°F
Wind: 11mph SSW
Humidity: 26%
Pressure: 29.93"Hg
UV index: 0
MonTueWed
93/66°F
90/64°F
91/64°F
Weather forecast Los Alamos, New Mexico ▸