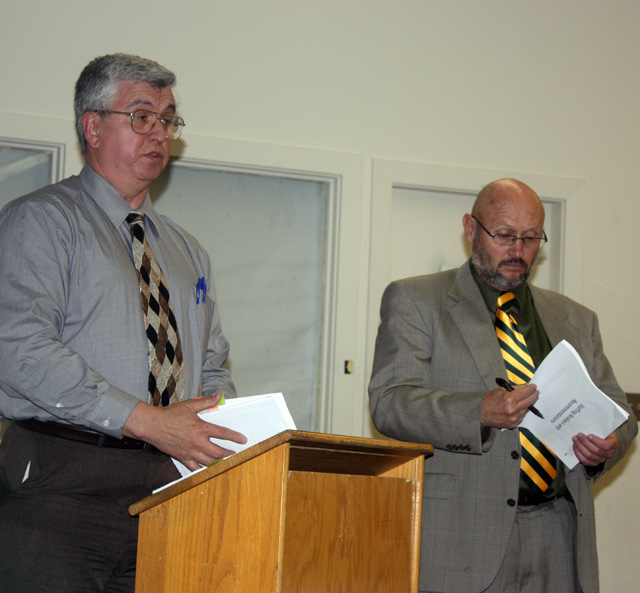 LAPS Chief Financial Officer John Wolfe, left, and Human Resources Director Gerry Washburn present their findings to a meeting of the the Los Alamos School Board focusing on the 2013-14 budget. The meeting took place May 9. Photo by Bonnie J. Gordon/ladailypost 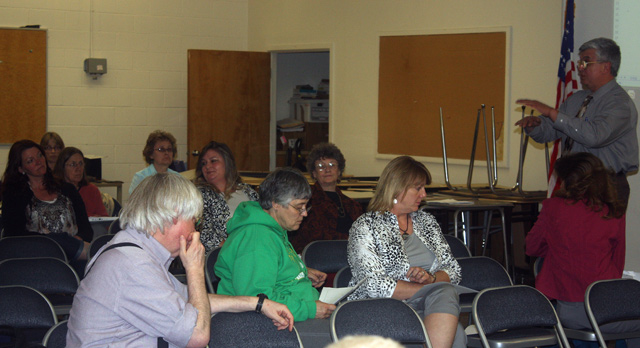 The Los Alamos School Board met May 9 to get input from the public on the proposed 2013-14 budget.

After savings of $141,000 from last year’s budget, initial board reductions of $28,000 and proposed savings from reorganizing the central office of $130,000, the District still faces a $299,000 shortfall for the coming school year. The budget process is still underway and cuts are still being proposed.

The School Board is pondering using part of the $1.9 million in District annual lease revenues, usually reserved for “rainy day” emergency use be used to offset some of the shortfall, this year only.

The Budget Committee has trimmed proposed expenses from $800,000 to $570,000, Hall said, adding that the Board is committed to a policy of no layoffs and to long-term salary growth.

LAPS Human Resources Director Gerry Washburn laid out a plan to reduce staff by seven using attrition and avoiding layoffs. The plan involves reducing two classes at Aspen Elementary, two classes at Barranca Elementary and one class at Pinon Elementary. Some out-of-district students would have to be moved. These actions would bring the student teacher ratio to 13.09, which is close to the historical average ratio of 13.30.

Former School Board Member Melanie McKinley expressed concern about increasing class size in the elementary grades. One special concern was a proposed third grade class at Pinon of 24 students.

Board Secretary Matt Williams explained that the elementary staff was forced to “take the hit” in teacher reductions next year because schedules were already in place at the middle and high schools. “Next year, it’s not going to be that way,” he promised.

Superintendent Gene Schmidt said the staff has already begun to look at reductions through attrition at the middle and high schools.

“We’re on the same team,” Board Member Kevin Honnell said. “Our legislature is not giving us the resources we need. We’ve done the best we can. We hope you will send us your suggestions for cuts.” 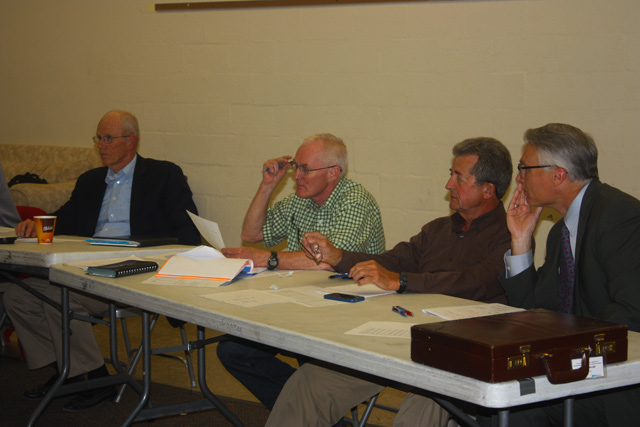 The Los Alamos School Board took a hard look at the proposed 2013-14 budget at a meeting May 9. Photo by Bonnie J. Gordon/ladailypost
Menu
LOS ALAMOS