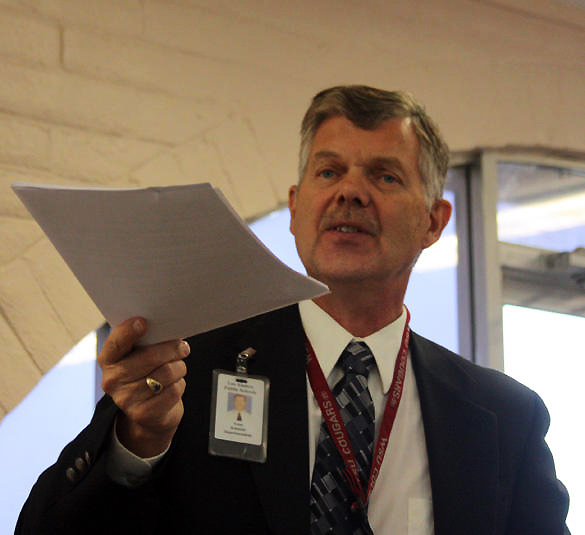 The month-long budget process came to a close when the Los Alamos School Board voted to accept the District’s budget at its May 22 meeting in the District Administration Building Conference Room. The board vote was unanimous. Board Vice-President Kevin Honnell was absent.

The districts revenue sources include approximately $26,248,000 from the State of New Mexico, $8 million from DOE and $3 million in lease income.

“One of the good things about this budget is that it means more money in people’s pockets,” Board Member Jim Hall said.

Details of costs and spending have been detailed in previous stories in the Los Alamos Daily Post – click here.

Final budget conversations included a report from Chief Operations Officer Joan Ahlers, who gave a presentation outlining the $500,000 per year budget line item to reinvest in District lease property. She recommends making the $500,000 reinvestment a yearly line item. The deterioration of the lease property is a serious problem, Ahlers said. No funds have been expended on the property outside of general repairs and maintenance in many years and the aging buildings are in need of substantial updating and repair.

For the first time, lease properties will be part of the overall District architectural plan, Ahlers said. This will give the District an idea of the costs involved, which she estimates to be in the area of $7 million, to be budgeted over a number of years.

Ahlers recommends spending the bulk of this year’s expenditures, approximately $360,000, to remodel the Canyon Complex leased by Los Alamos National Laboratory. The District will seek matching funds for this project from Los Alamos County at a County Council Meeting Tuesday, May 27.

Sheryl Bailey, LANL Leased Program Office director, provided Ahlers with a “wish list” of repairs, topped by replacing old single-paned windows that no longer seal closed, at the four sites where LANL leases property from the District. Also topping the list were bathroom plumbing and fixtures and old doors that do not seal properly.

Calling the Canyon Complex “a depressing environment,” board member David Foster said that when he worked in the building as a LANL employee, every employee had to bring a space heater to supplement the central heating because the building was so drafty.

In other Budget discussion, the Board decided to leave in funding for 0.2 FTE (full-time employee) help for elementary school principals. Last year, the help came in the form of staff assistance to the principals in dealing with the new teacher evaluation system. The Board heard from several elementary principals who said the help was useful and needed, but also said they would like to explore how the funds could be used to best assist principals. The board will revisit this topic in the future.

Discussion then turned to the ongoing problem of declining enrollment and balancing class size. Assistant Superintendent Gerry Washburn provided an overview of class sizes for next year. The addition of three new teachers has solved the most pressing class size issues, he said.

First grade class size at Mountain continues to be an issue, but there is no physical space at the school for another classroom, so teaching assistants will be placed in each classroom to help deal with the large class size. The other large class issue is the fifth grade at Pinon. Pinon Principal Jill Gonzales said that many students in the fifth grade are in GATE and out of the regular classroom for long periods and that behavioral issues in this particular grade are few, so even though the two classes each have 25 students, teachers feel confident they can cope.

District enrollment has declined an average of 2.66 percent each year since 2008, Washburn said. Enrollment declined by 3.43 percent in 2013-14. The District has offset declining enrollment by taking out-of-district students, but their numbers also are declining, Washburn said.

“This is not a ‘this year’ problem,” Hall said. “If we do it right, we’ll be in okay shape for a few years and in excellent shape thereafter.”

Superintendent Gene Schmidt gave an update on progress in crafting District proposals to the N.M. Dept. of Education on the teacher evaluation system and end-of-course exams. Schmidt and his staff are coordinating committee meetings and teacher surveys to be conducted this summer. Schmidt said he plans to present the proposals to the School Board in mid-July and submit them to PED by July 22, which is the deadline.

Several School Board members expressed dissatisfaction with the choices offered by PED. For example, one basis for teacher evaluation offered by PED is parent surveys to replace some percentage of evaluation based on student test scores. However, the surveys would have to be completed during a two-week period with 95 percent parent participation.

“It’s not doable,” Hall said with irritation, as the rest of the board nodded in agreement.