School Board Taps Barranca For Renovation 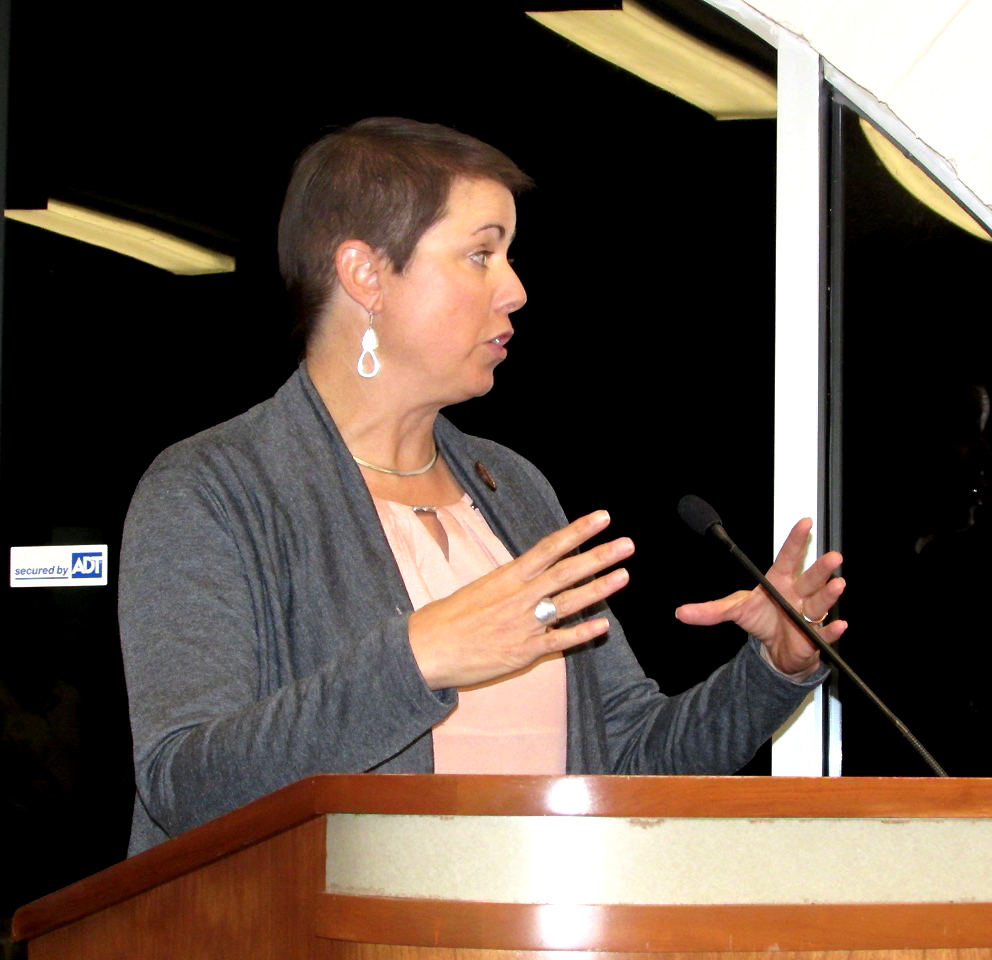 LAPS Chief Operating Officer Joan Ahlers explains at Thursday’s board meeting how the PSFA works. Photo by Kirsten Laskey
By KIRSTEN LASKEY
Los Alamos Daily Post
The Los Alamos Public School (LAPS) Board of Education is moving forward to renovate Barranca Mesa Elementary School.
During its regular school board meeting Tuesday night, the board unanimously approved a motion to direct staff to begin work on the educational specification process for the elementary school as well to apply for New Mexico Public School Facilities Authority (PSFA) matching funds for the project.
Renovating Barranca was just one of several options the board considered pursuing. Other options included renovating either Pinon Elementary or Chamisa Elementary or combining the two White Rock elementary schools into one. To make a decision, the board scored the different options using a matrix.
Board President Jim Hall said the matrix’s top four criteria included securing state matching funds from the Public Schools Capital Outlay Council, maximizing a positive learning experience, receiving support from the community to pass a bond election in January 2017 and creating learning spaces that assure staff and student safety.
It is little wonder that renovating Barranca came out on top, he said. Barranca Elementary School, according to the PSFA, is the 17th worst school facility in the state.
“We’re looking at a school … that is only on one boiler … kids (are) in closets for speech class,” Board Member Andrea Cunningham pointed out.
Barranca Principal Virginia Terrazas also spoke in favor of renovating her school. She stressed that “safety comes first. That’s my main concern.”
Kelly Saeger, a secretary at Barranca, also emphasized the importance of safety, especially in a facility that is falling into disrepair. “If we don’t pass this,” she said, “It’s going get worse.”
Several Barranca teachers urged the board not to cut down classroom sizes in order to decrease what the district would need to pay out of its own pocket while working on the education specifications. One kindergarten teacher said, “Pay the extra money; it’s worth it.”
Although support for renovating Barranca was strong, there was concern on the board about what would happen if the PSFA did not award the school district funds for the renovation project.
Board Member Matt Williams pointed out that come March, when PSFA will make its decision on which applicants to fund, Los Alamos may or may not get selected. If the district isn’t selected, that changes the game, he said. Without PSFA funding, Williams said he was afraid the district will get stuck with paying for the most expensive renovation so perhaps the board should give itself another option.
Superintendent Dr. Kurt Steinhaus said if PSFA does not award the funds to the district this time, the district’s chances will approve in preceding years. As of right now, the district will pay $50,000 for the education specification process. The application for PSFA funds is due in February.
LAPS Chief Operating Officer Joan Ahlers explained how the PSFA works. She said PSFA gets money from state legislature to build school buildings. The organization forms of a list of 100 school buildings determined to be the worst in the state. Factors such as overcrowding and safety are used to identify which schools are the worst.
The schools that make the list are eligible for funding. Ahlers added that all three schools: Barranca, Pinon and Chamisa are on this list.
Hall said he felt Barranca should be selected because it increase the likelihood that PSFA would award funding. He added getting support from the community for a bond election also is very important.
A parent of a LAPS student also spoke in favor of improving Barranca. “Improving any school in the district is a good thing,” she said.
Menu
Los Alamos
45°
Fair
6:58am4:51pm MST
Feels like: 41°F
Wind: 5mph NNW
Humidity: 25%
Pressure: 30.33"Hg
UV index: 0
ThuFriSat
59/36°F
57/36°F
55/32°F
Weather forecast Los Alamos, New Mexico ▸