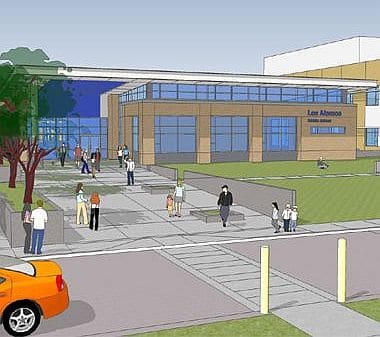 The days of cold classrooms in 1960-era buildings are coming to an end at Los Alamos Middle School.

With the Board of Education’s approval of a contractor during Thursday’s special board meeting, LAMS $18.5 million makeover will begin this summer.

After holding interviews May 13, the evaluation committee decided on McCarthy, a builder out of Albuquerque with offices across the country.

Known for its emphasis on building green, McCarthy built the 118,527-square-foot educational building in Hobbs with classrooms, an art studio, a technology lab with a wind tunnel and a film studio.

The company also built the University of New Mexico Science & Math Learning Center in Albuquerque among many other projects around the state.

Assistant Superintendent Paula Dean said that the project was approved by bond election and that the Public Schools Authority matched one-third of the cost.

“Their contribution gets us to $18 million,” Dean said.

The goal is to construct a temporary campus consisting of portable classrooms this summer, said LAPS Bond and Construction Coordinator Herb McLean.

Some of the portables are already at the school, others will be transferred from Los Alamos High School and some may be delivered from Albuquerque.

A bus loop will be constructed just south of the campus, behind the cafeteria. McLean said the loop will be completely separate from the parent drop-off and faculty parking areas.

Officials hope to get any noisy demolition work completed during the summer months, McLean said.

What will ultimately be produced is a two-story building.

A brand-new building will take the place of structures that were built in the early and late 60s, but more than that, it will help enhance students’ education, McLean said.

Current classrooms get quite frigid when winter winds whip through the old walls.

The new classrooms, McLean said, will be well insulated and sealed against the wind.

With the heating and air conditioning brought up to code, “kids will be able to do better in a learning environment because we can monitor how much fresh air will be brought into the classrooms,” he said.

The biggest benefit is that the new building will reflect the middle school’s team-teaching philosophy, he said.

“When the construction committee looked at the school, they decided that they wanted to enhance the team-teaching so there will be physical places in the school for the six teams. It will really enhance team-teaching. (For) each team, there will be a math room, a science room, a social studies room and an English room,” McLean said.

LAMS administrators will also benefit. McLean said the current admin building feels separated from the main school so the remodel will connect the two structures.

Administrators “can leave their offices and immediately have a sense of what is going on in the rest of the school,” McLean said.

With the construction project at Los Alamos High School successfully completed, McLean is feeling good about the upcoming project.

The LAMS project is expected to take less time – 15 months compared to the 18-month-long high school construction project, and it will be less complicated.

McLean explained that construction at the high school took place right in the middle of campus where there was a lot going on.

“I expect it to go much easier and faster for the district and more importantly for the students,” McLean said.

The finished product at LAHS has gotten a lot of positive feedback, McLean said, so he is excited to give a new campus to the LAMS educators and students.