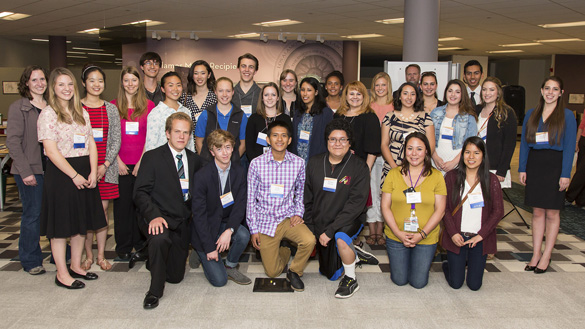 Past and current LANL Foundation scholarship winners join donors at a reception to kick off the 2016 fundraising campaign. Photo by Richard C. Robinson/LANL 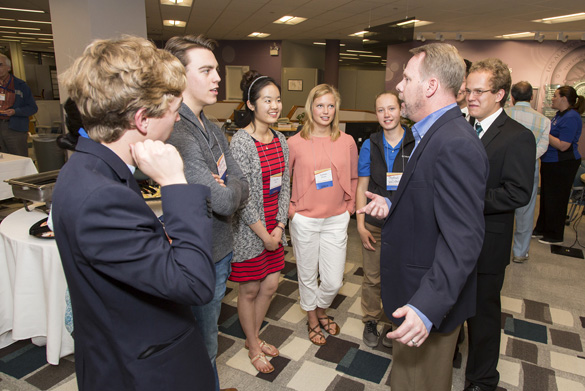 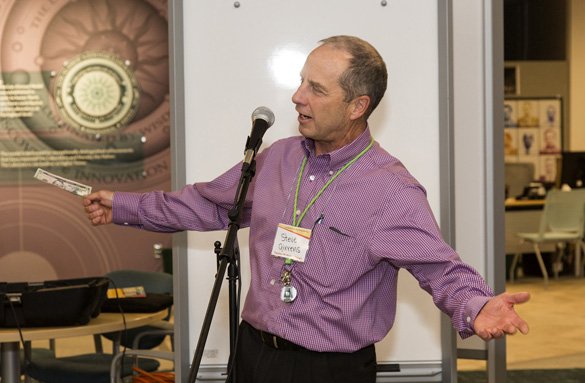 Steve Girrens, Associate Director for Engineering Sciences at Los Alamos National Laboratory is serving as scholarship campaign champion for a second year. ‘One of my passions is to support STEM education. It’s an honor to champion an activity that does so much good in the region. I want to challenge the institution to increase participation — a $5 payroll pledge from 15 percent for our future.’ Photo by Richard C. Robinson/LANL

Scholarship winners, their families and donors recently gathered at the J. Robert Oppenheimer Study Center at Los Alamos National Laboratory to celebrate the 2016 Los Alamos Employees’ Scholarship Fund award recipients and to mark the start of the annual fundraising campaign.

This year, 95 Northern New Mexico Students were awarded $566,750 in scholarships, primarily funded by donations from Laboratory employees and a $250,000 matching contribution from Los Alamos National Security, LLC (LANS). Due to the record-setting campaign in 2015 with $356,299 donated by Lab employees, this year the program awarded an additional $150,000 and 20 more awards to students from the seven counties surrounding the Lab.

In Addition to receiving awards, 45 of the 2016 scholars also will recieve the opportunity to work at the Lab as interns with a mentor this summer due to support and funding from Laboratory Director Charlie McMillan. Several past recipients are returning for summer employemnt as well.

The scholarship fund is administered by the LANL Foundationwith program oversight provided by an advisory committee of donor volunteers. Since 1999, the fund has awarded more than $5.5 million to help 1,100 students realize their dreams of attending college. Since 2006, LANS has contributed $2.7 million to scholarships. The Laboratory workforce has generously given more than $3.7 million to fund scholarships in perpetuity.

The fundraising goal is to raise $650,000 including the LANS match to fund 2017 awards and to continue building the endowment for a sustainable program.

Laboratory employees may set up one-time or repeat pledgesby payroll deductionuntil June 17. Donations from the general public and local businesses can be made online at www.lanlfoundation.org.

Since 1997, the Los Alamos National Laboratory Foundation, a 501(c)(3) nonprofit, has worked to inspire excellence in education and learning in Northern New Mexico through innovative programming, collaboration and advocacy. By investing in human potential, the Foundation’s vision is that all New Mexicans have the skills and confidence they need to be self-sufficient, lifelong learners who are engaged in their communities. Programs in early childhood education, STEM inquiry learning, scholarships and small grants serve Northern New Mexico communities primarily in Los Alamos, Mora, Rio Arriba, San Miguel, Sandoval, Santa Fe and Taos counties. (http://www.lanlfoundation.org) 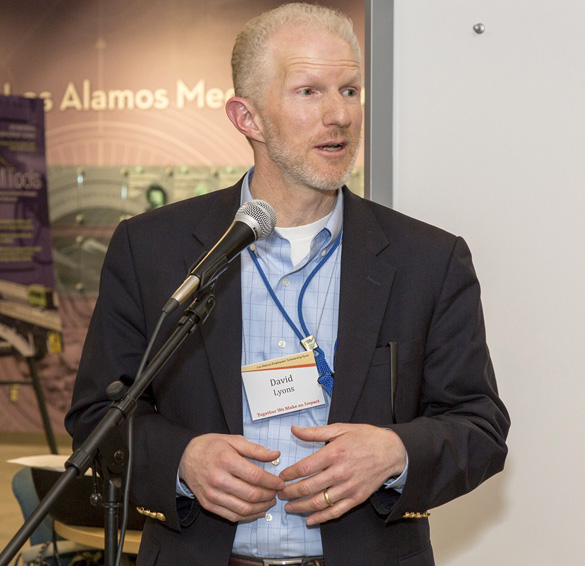 David Lyons, Laboratory Executive Director, addresses donors and students. ‘On behalf of the director, I echo the critical importance of these scholarships for the Lab and Northern New Mexico. Congratulations, students, you should be very proud. You rose to the top, and we look forward to having you work here at the Laboratory.’  Photo by Richard C. Robinson/LANL 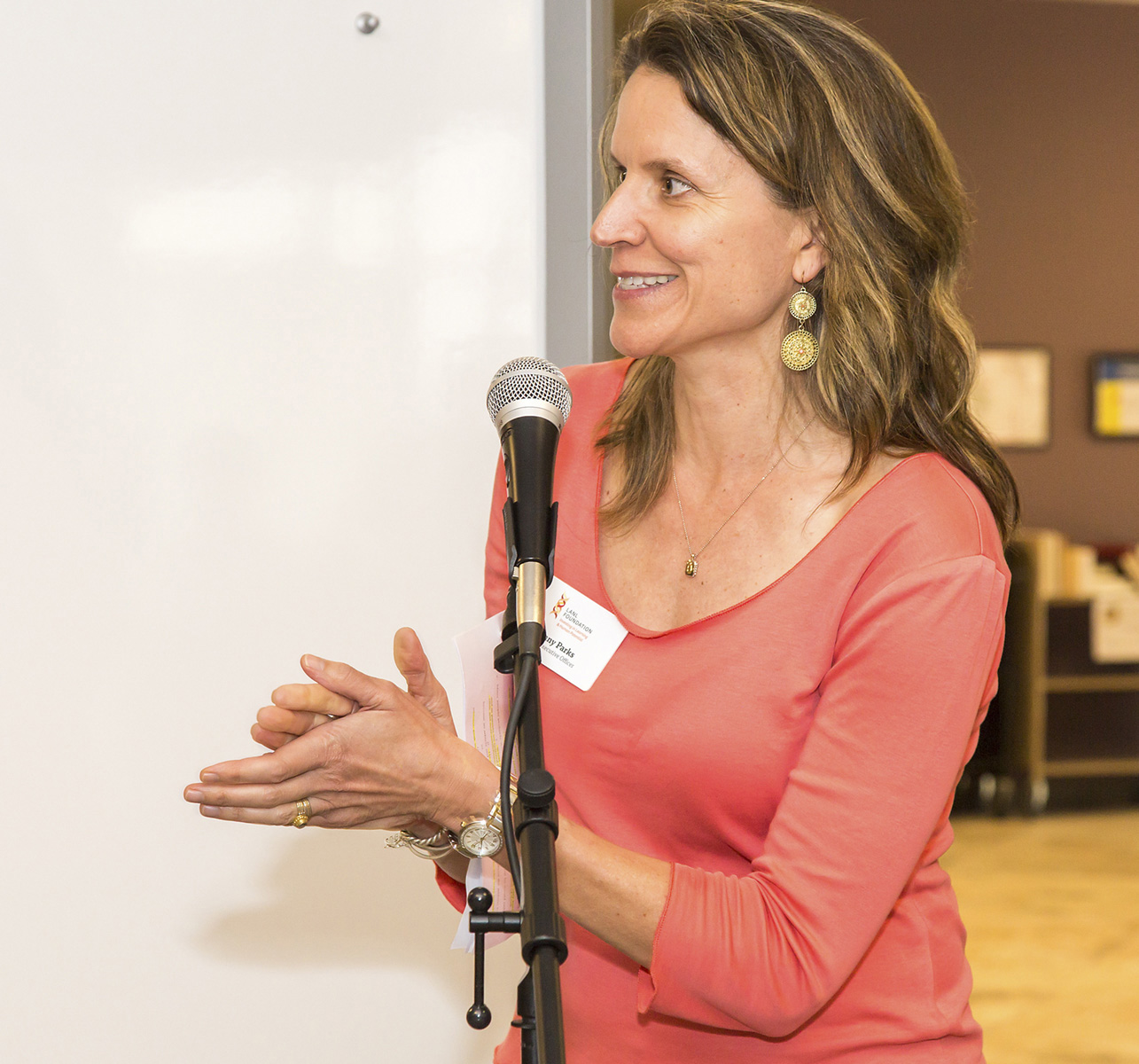 Jenny Parks, LANL Foundation CEO, congratulates students and their families. ‘It truly takes a family to support our students and get them to college. There are significant challenges that many families face.’ Photo by Richard C. Robinson/LANL 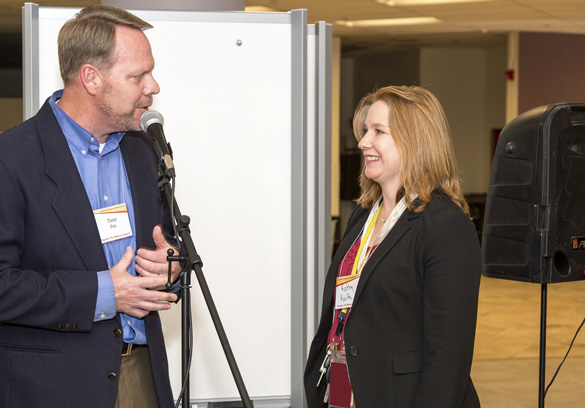 Tony Fox, LANL Foundation Vice President of Advancement and Scholarships, and Kathy Keith, Laboratory Director of Community Relations and Partnerships, share how both organizations work collaboratively during the campaignand thanked employees and LANS for generously donating to scholarships. ‘This scholarship program began as a grassroots movement by a few Laboratory employees who cared about giving back to students. The first year, the program raised $40,000 and since then, $5.5 million has been awarded to help 1,100 students realize their dreams of attending college,’ Fox said. ‘This programs is a pipeline of employment to the Lab. That was always the goal.’ 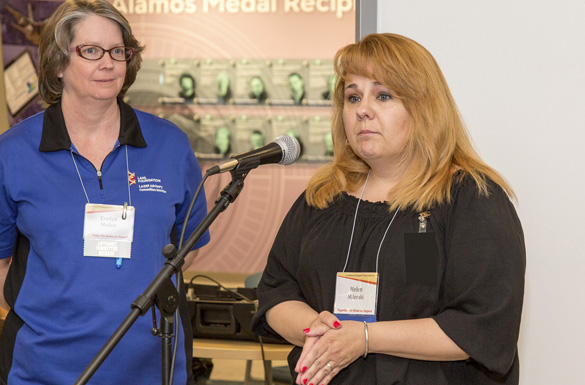 Evelyn Mullen, Deputy Associate Director, Threat Identification and Response, and scholarship advisory committee chair, with Helen Milenski, $5,000 Bronze scholar. ‘I’m a product of the pipeline to employment at the Lab. My internship turned into a tech position,’ Milenski said. ‘I received a Regional College/Returning Student scholarship in 2015 that helped me accomplish my associate’s degree in pre-engineering from UNM-Los Alamos. Now with this scholarship, I’m working toward an engineering bachelor’s degree. These scholarships are so important, and each donation affects so many lives—me, my daughter, my husband, and many students.’ Photo by Richard C. Robinson/LANL 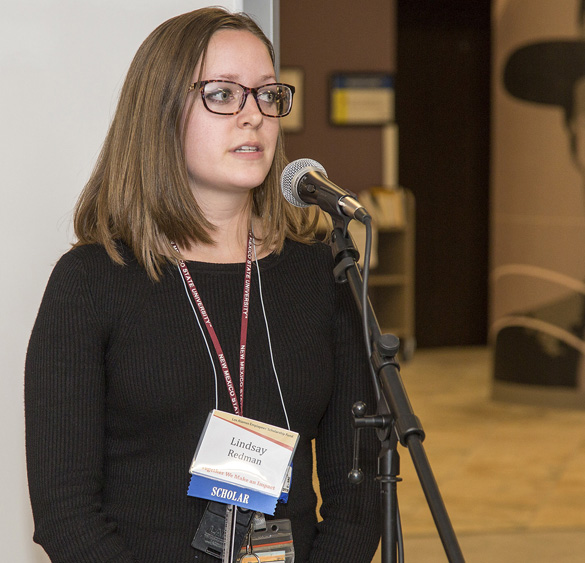 Speaking to donors, current Laboratory employee and 2011 Bronze scholarship recipient Lindsay Redman said, ‘What you do makes a huge difference. The money was important, but it was also the internship that made a difference for me.’ As an undergraduate, Redman changed her major to biochemistry after a summer job in the Laboratory’s Chemistry Division. Photo by Richard C. Robinson/LANL 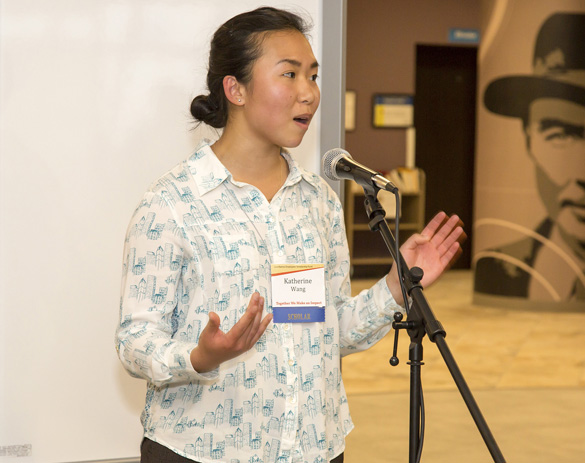 ‘This scholarship has allowed me to make the decision to pursue a degree at Princeton. I’m excited about my internship at the Lab in theoretical physics this summer. Thank you. It means so much to have our goals validated,’ said Katherine Wang, Los Alamos High School graduate and $20,000 Gold Scholar. Photo by Richard C. Robinson/LANL 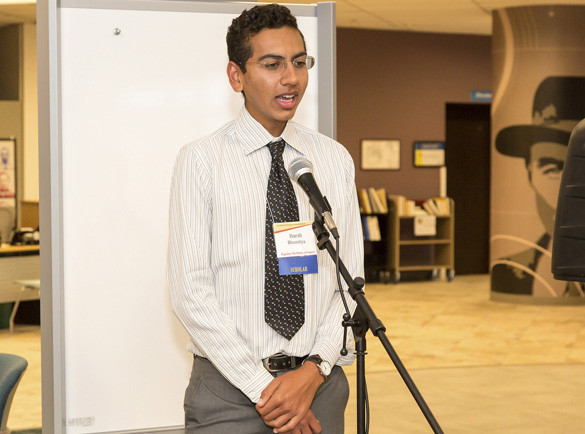 Santa Fe Preparatory School graduate and $10,000 Silver scholar Harsh Bhundiya will attend Cal Tech to study aerospace and mechanical engineering. ‘I want to impact the world by researching more efficient and more environmentally sustainable aircraft. This scholarship will reduce the burden on my family and also give me confidence to succeed. Thank you to all the donors at LANL, your generosity has made a huge impact on my life.’ Photo by Richard C. Robinson/LANL 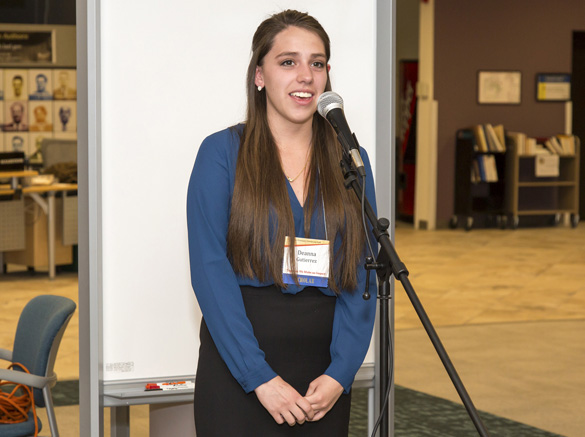 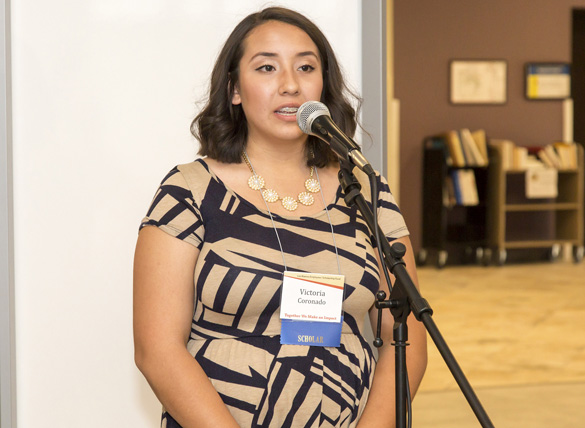 Victoria Coronado, Mesa Vista High School co-valedictorian and winner of Bronze and Tim Martin Memorial scholarships. ‘My family didn’t know how to fund college. It’s due to your generosity that I can go to UNM and study engineering.’ Photo by Richard C. Robinson/LANL 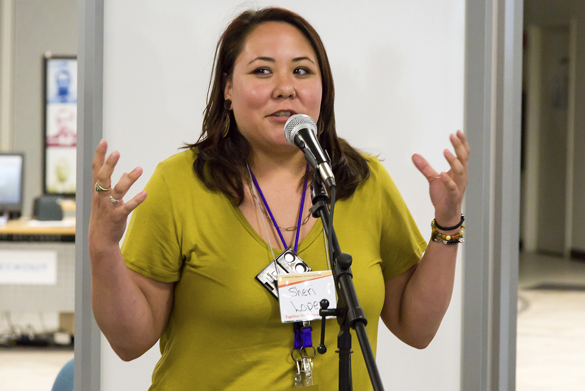 Sheri Lopez, 2015 Bronze scholar, is­ currently attending New Mexico Institute of Mining and Technology to study mechanical engineering. Her summer internship with IFR-1 Space and Science Applications, involves coding for gamma ray particle detection. Her own challenges starting a career in science in addition to her desire to support others led Lopez to develop a program called STEMLY – Science, Technology, Engineering, and Math for Ladies and Youth. ‘Young women need support. This pilot initiative will connect female students with women in science fields for mentorship and guidance. We can create friendships and learn from women who have been there before.’ Photo by Richard C. Robinson/LANL