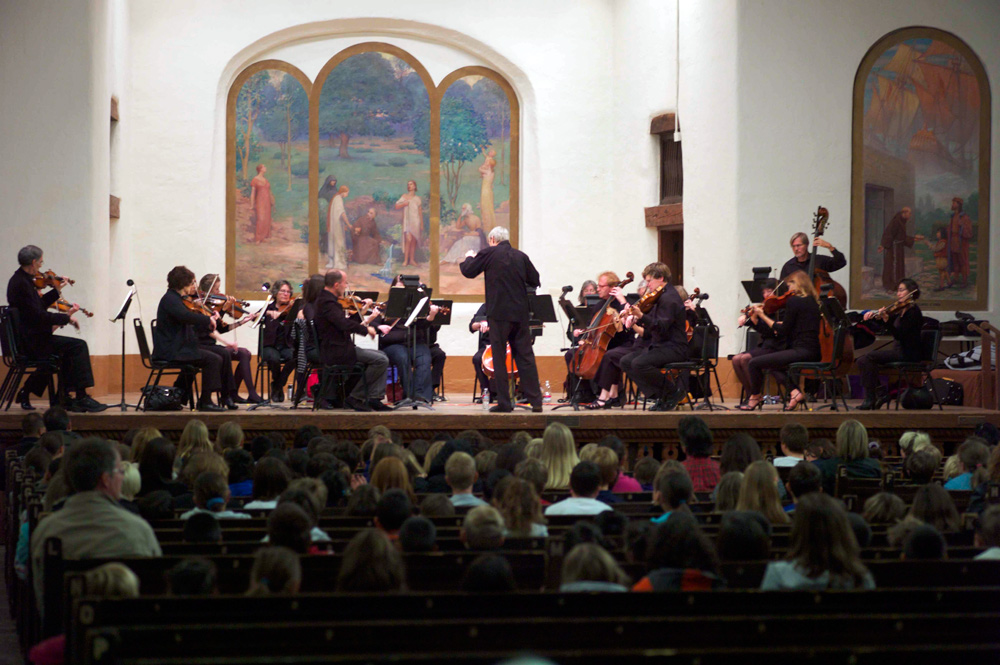 Thomas O’Connor, Santa Fe Pro Musica conductor and music director, presents a “behind the scenes” discussion of the music, one hour prior to each concert, free to ticket holders.

To be performed on modern instruments, Bach’s Brandenburg Concertos are supreme examples of Baroque instrumental music – each is unique and varied in instrumentation and character.

In 1721, J. S. Bach sent a set of six concertos to Christian Ludwig, the Margrave of Brandenburg. The Margrave shelved them in his library where they remained untouched. The concertos were rediscovered in the Berlin Imperial Library during the 19th century and published in 1850. The popular name Brandenburg Concertos was bestowed in 1873 by Philipp Spitta from his biography J. S. Bach.

The concert opens with Concerto No. 3, scored for three violins, three violas, three cellos, plus continuo. Throughout the two fast movements, Bach combines and recombines the three trios of instruments, having them echo and contrast with each other. The Adagio is a single measure that contains only a cadence connecting the two fast movements. It is conjectured that Bach’s intention was not the insertion of an additional contrasting movement, but an opportunity for the harpsichordist or first violinist to provide a brief improvisation.

Concerto No. 4is scored for a trio of solo violin and two flutes, supported by the ripieno. Within the solo group, the violin is the most virtuosic participant, investing the music with the texture of a solo concerto. The flutes most often work in tandem, intoning their parallel motifs in consonant thirds and sixths, and can be considered a solo unit rather than separate soloists.

This is followed by Concerto No. 1, featuring a rich array of instruments in an eleven-part score: two French horns, three oboes, one bassoon, solo violin and ripieno (string orchestra). Both Allegro movements are characterized by vigorous interplay among the solo instruments and the orchestra. The solo violin and oboe lead in the Adagio. In the closing dances, four repetitions of the Minuet surround a trio for woodwinds, a Polish dance for strings, and another trio for horns and oboes.

After intermission comes Concerto No. 6, which is scored for two contrasting but low-register formations: two violas and cello (the “modern” four-stringers) and two violas da gamba and violone (the “old-fashioned” six-stringers). The unusual sonority created by the exclusive use of middle and low register strings is dark and mellifluous.

Concerto No. 5consists of solo violin, flute, and harpsichord – the most fashionable chamber music combination at that time – and ripieno. As the concerto begins, all three soloists share equally, but the harpsichord becomes increasingly dominant and finally bursts into an extended solo cadenza, fully constructed by Bach. In the second movement, only the soloists play, with the violin and flute frequently paired in contrast to the harpsichord. Bach begins the third movement with only the soloists, gradually bringing in the ripieno one section at a time, reestablishing its concerto nature.

The grand finale of the evening is Concerto No. 2, scored for high-voiced instruments: trumpet, flute, oboe and violin. In the outer movements, all four soloists share the same material; no idiosyncratic differentiation between instruments. The Andante is for flute, oboe, solo violin and continuo. The outer movements have the energy of Vivaldi, however the brilliant fugal writing of the last Allegro is distinctively Bach.

Santa Fe Pro Musica, founded in 1980, is a nonprofit performing arts organization dedicated to inspiring and educating audiences of all ages through the performance of great music. Pro Musica performs a varied repertoire, covering four centuries of music on modern and baroque instruments, including works for chamber orchestra, small ensemble and large-scale works for orchestra and chorus.