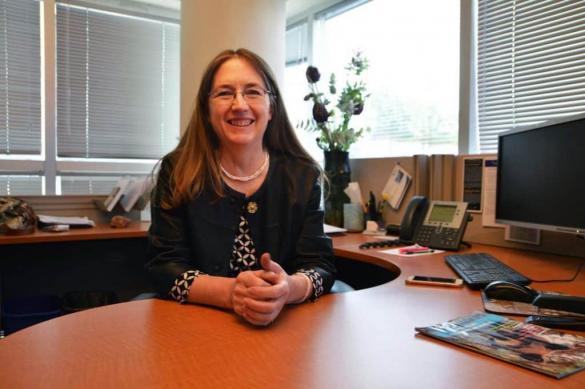 Sandra Snow in her office at LANB where she heads up a four-member team of experts in the field of Bank Secrecy Act compliance. Photo by Carol A. Clark/ladailypost.com

Tucked away in a casual office suite at Los Alamos National Bank, Snow and her team are the watch dogs for potential money-laundering, criminal activity, and terrorist financing.

“It’s all about following the money trail, protecting our people and country against acts of terrorism and various crimes,” Snow told the Los Alamos Daily Post during a recent interview. “Another thing we watch for is elder exploitation. That is one of the areas where we feel we can make a positive impact for our customers.”

Snow has held BSA compliance responsibilities at several community banks since 1985 and has worked at LANB since 2013.

“Back in the 1980s and 1990s BSA compliance duties accounted for about 1 percent of my job and now it’s 100 percent,” she said. “So, I’ve seen it from the ground up. It was initially focused on currency transactions and it wasn’t until after 911 that the focus became terrorist financing and money laundering.”

The biggest challenge of her job now is keeping up with the ever-changing regulations in this field, she said.

“The very best thing about my job at LANB is getting to work with an amazing group of people who understand the history of this area and how important it is to keep the community in community banking.”

Snow serves as treasurer of the Rotary Club of Los Alamos and explained why she feels community involvement is an important aspect of her job.

“In my years in Raton I was involved in Rotary including one year as club president. When I came to LANB in Los Alamos I wanted to join Rotary here because it is a great way to get to know people in the community while participating in the mission of Rotary. Rotary members partner with other Rotary clubs, pulling together all these different people to complete challenging projects all over the world, including Rotary’s signature project, eradicating Polio. We also fund significant local scholarships and participate in Youth Exchange, which allows high school students to experience a year in another part of the world. It’s fun and satisfying to be a small part of that. LANB has been very supportive in this effort.”

Snow was born in Santa Fe and raised in rural areas of the northeast corner of the state. She graduated from Raton High School and holds a double degree in Business Administration and Finance from Regis University in Denver.

She said she feels a close tie to Los Alamos through her grandfather James McDonald.

“He got his security clearance in the 1942-1943 timeframe and helped build the roads up here, so I do have a direct connection to the Manhattan Project,” she said. “My Grandmother Marge McDonald knew my grandfather needed a security clearance but had no idea why until after the war.”

Today, Snow lives on a property her grandparents bought in 1946.