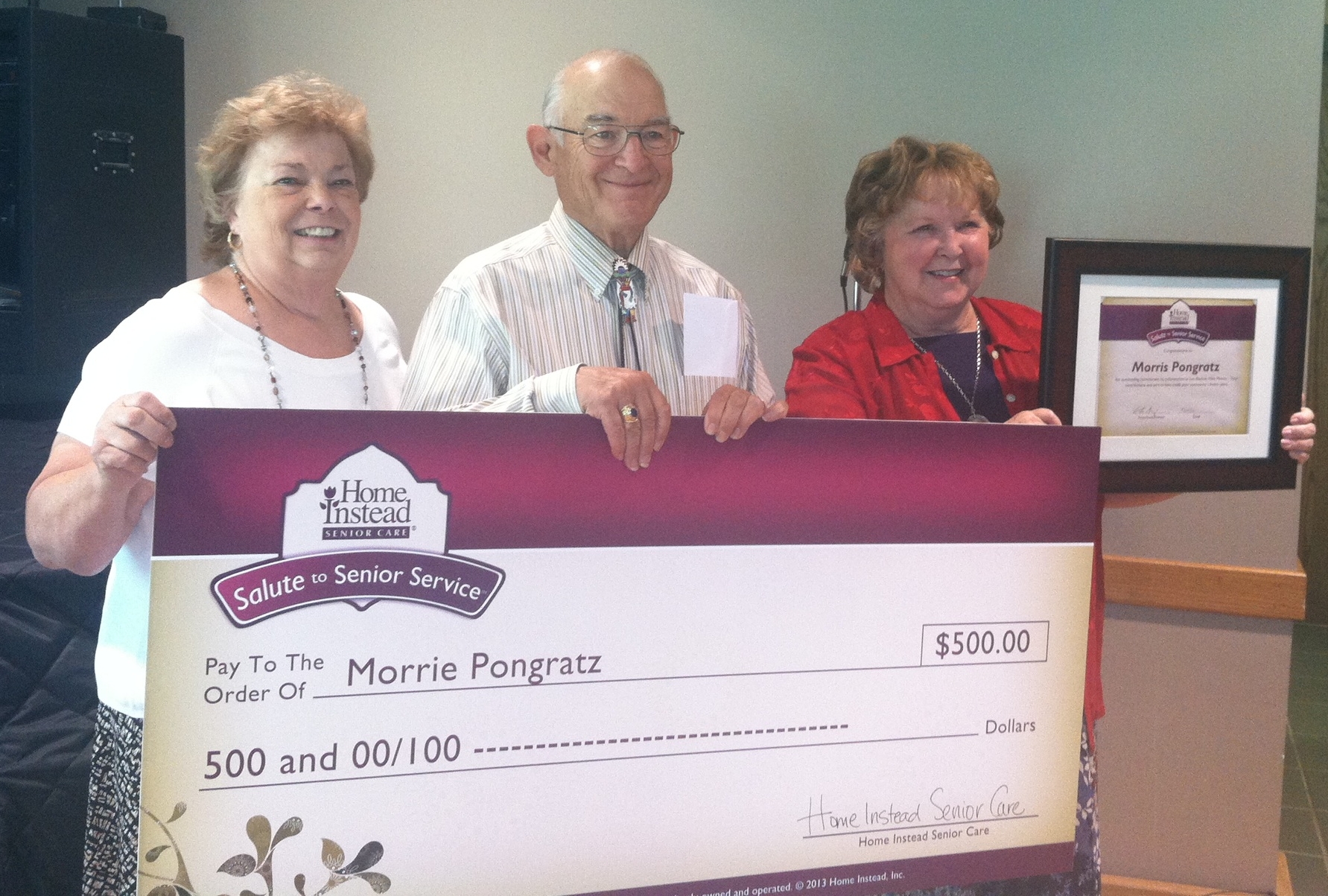 Home Instead Senior Care network held an awards ceremony and celebration Wednesday to honor four local seniors who volunteer their time and talents.

The public was invited to vote online for the nominees and Morrie Pongratz came out on top. He was awarded a $500 check, which he plans to donate to Los Alamos Family Council.

Loring Cox, Carol Pyburn and Dick Tatro also were honored with certificates during the ceremony. The state winner will be announced on June 9.

The Home Instead Senior Care network’s mission is to help seniors stay healthy and active as they age, which many do through volunteering. They also ecourage a positive outlook on aging. The award seeks to encourage everyone in the country to personally recognize seniors who set an inspiring example for people of all ages.

Loring Cox has volunteered at Casa Mesita Thrift Shop for more than 40 hours per month for 30 years and he walks the two miles between his home and Casa Mesita.

Carol Pyburn joined the Los Alamos Medical Center’s Hospital Auxillary in 1996. During her 18 years with the Auxiliary, she has served as president twice, vice president, treasurer and hospitality chair. She also is part of the Teddy Bears Brigade, cutting out bears so others can get them sewn. The bears are given to sick children in the hospital. And last but not least, she works in the Hospital Lobby Shop every Friday.

Dick Tatro is a Living Treasure in Los Alamos. He has volunteered for Habitat for Humainty building houses in Espanola for more than 20 years. Tatro and his friends have built more than 100 wheelchair ramps and put grab bars in homes of the elderly. Dick has also volunteered for the Los Alamos Retired and Senior Organization 20 hours per month for more than 20 years and is currently board president. He does everything at the senior centers from fixing chairs, to driving the senior van to fixing the sewing machines for the quilters group.

Executive Director Joy Beery of Los Alamos Family Council nominated Pongratz for the Salute to Senior Service award. In Beery’s nomination, she described his many contributions to Los Alamos:

Morris (Morrie) Pongratz is highly regarded in the Los Alamos community – he was selected as a “Living Treasure” last year. He is very active as a volunteer in the following ways:

He has been the Los Alamos High School Key Club sponsor for 25 years and has worked with the students on projects such as raising money for the United Way and supervises trips to state and district meetings.

He helped organize and was a vice president with the non-profit Juvenile Justice Advisory Board, which funds a wide variety of programs for grades 8-12 including the Teen Center that opened three years ago.

Morrie is known by the students as the “Voice of the Toppers” because he has been the volunteer announcer for football, soccer, volleyball, basketball and track for 25 years.

For 20 years, he has been teaching high school religious education classes at church as well as facilitation of the adult religious discussion group. At Aspen Elementary School he is a first grade reading coach and serves on their site council.

Morrie was on the Los Alamos Public Schools (LAPS) Board of Education for four years and has written annual statistical reports for the Board covering the results of annual surveys such as Pride. Those reports are used not only by the schools for planning but also community agencies to plan prevention and early intervention programs.

He is the co-chair of the LAPS Strategic Planning Committee and a charter member/past president of the non-profit LAPS Foundation, which raises funds to support teachers and building improvements.

LA Family Council has been pleased to have Elvis (Morrie in costume) as the emcee for the annual Family Sock Hop fundraiser for the Youth Activity Centers and the Counseling Center.

In addition to the classes Morrie teaches at Immaculate Heart of Mary Catholic Church (IHM), he serves as a Lay Distributor and Lector. He organized and contributed to a book published by IHM: “Nuclear Weapons and Morality: A View from Los Alamos.”

Morrie served as an elected official for 14 years on the County Council and he serves on the DWI Advisory Board.