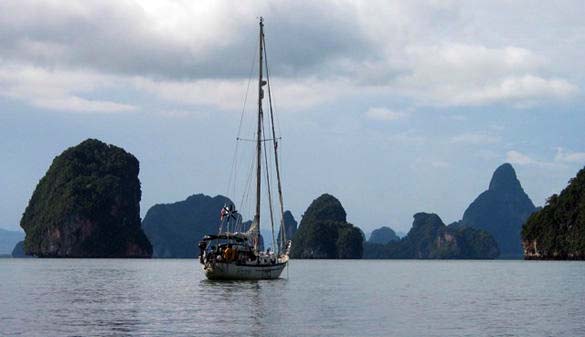 Join the Los Alamos Mountaineers for an exciting presentation by Larry Hersman, a Los Alamos native and sailor.

Social time and reports of recent and upcoming trips begin at 7 p.m. The program begins at 7:30 p.m. Wednesday, June 17 at Fuller Lodge in downtown Los Alamos.

Hersman began sailing around the world shortly after retiring from LANL, mid-winter 2007. What was to take two years ended up being just over six – starting and ending in Washington, N.C. on the Pamlico Sound.

Imagine if you can, combining your house, car, and utilities (electrical, water and sewage) in a single, mortgaged vessel, Hersman said. Then putting it in an unstable and windy, corrosive electrolyte – for six years. Such is the way of open-ocean cruising, where cruising the World is commonly defined as “fixing your boat in exotic places” because nearly everything will break or corrode – constantly!

So why do it? Well, Hersman said, for starters the “sea” must be considered the first great wonder of the world – for it covers over 3/4 of the world’s surface and controls much of our weather and climates. And like mountains, it has drawn mankind to it – ever since we learned how to float.

When walking on a beach there are those who look only at the shore, waves, seabirds and salt grass bending in the breeze – which is fine, he said. But there are those few who only look out to sea – drawn to “what is out there, beyond the horizon.” Why go to sea? Well the answer is similar to the question “why climb a mountain.” As we know, those who ask that question don’t understand that answer – “because it is there.”

So it began ─ then six years and 26 countries later the circumnavigation was competed.

“Along the way we swam with whales in Tonga, were chased by a Komoto Dragon in Indonesia, dodged pirates and nicked by a cyclone in the Indian Ocean, and blew out the Main (sail) crossing the Atlantic,” Hersman said. “We anchored in deserted white sand beaches, swam in gin clear waters, experienced sunsets of near biblical proportions, and met peoples of the world – in “faraway places with strange sounding names.”

The sea has many personalities, ranging from tranquil and pastoral to powerful and terrifying. Hersman looks forward to sharing some of this with the LA Mountaineers.