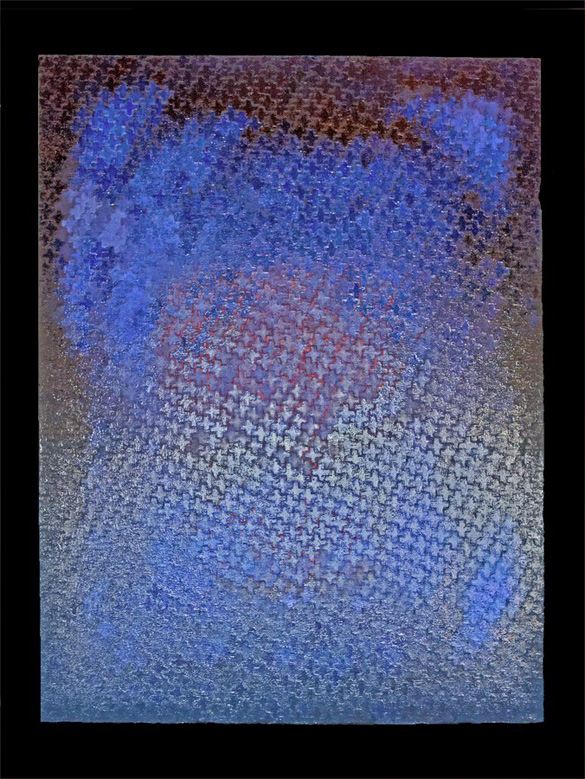 This painting by Ryszard Wasilewski is part of the series that will be on display at the Mesa Public Library Art Gallery June 30-Aug.5. Courtesy/MPLAG

Wasilewski’s work can be viewed June 30 through Aug. 5 in the Mesa Public Library Art Gallery, open during regular library hours.

Wasilewski graduated from Camberwell School of Art (London, UK) in 1968, majoring in painting, with sculpture, print making and art history as minors. He has shown his work in the United States (New York, New Jersey and New Mexico) and in Europe (London and Warsaw).

He has carried out numerous public works and private commissions (murals and sculpture) in New Jersey and in New Mexico. Although he stopped painting for several decades while working on animation, both freelance and for commercial studios, he returned to painting in 2000, and has been working with oil and acrylic on canvas, and with mixed media on paper.

Wasilewski has recently worked on a series of installations in the landscape in the Jemez Valley and focused on series paintings in his studio near Jemez Springs.

About his painting series, Wasilewski writes, “As is common in painting, the pieces in this series are representations of interacting elements enabled to create a whole whose nature is to transcend the sum of its interdependent parts. The characteristics of each piece make it apparent that they do not consist of an ordered succession of repetitious, linear, and sequential symbols presented for dissection and analysis. These paintings are emphatic in their demand on the viewers’ perception to switch back and forth between seeing the whole and seeing the repeating elements they are composed of.

“Viewers are nudged very gently in each series. The ambiguities and contradictions are understated, and do not assault. The effect of observing what is compositional and yet not compositional, minimal and yet made up of interacting detail, intends to conform to the normal mode of perceiving the world around us. Each time viewers complete the process of observation, and even perhaps understand how the elements were pieced together in linear progression over time, they can return to considering the piece as it is presented in its complete state ‘now.’ The elements are intended to become pathways towards locations from which to observe the whole in a manner analogous to both inward and outward perception. Each piece represents either a different state, or different location from which to observe a similar state.”