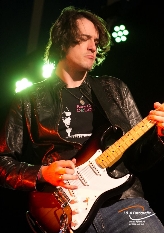 In a relatively short amount of time, McGarvey has not only gained a national and international fan base, but also admiration from his personal idols.

McGarvey has shared the bill with such top name act’s as Eric Clapton, Jeff Beck, B.B. King, Joe Bonamassa, Gov’t Mule, The Fabulous Thunderbirds among many others.

His debut CD release “Forward In Reverse” reached the top 20 on the best sellers list on CDBaby.com.

With rave reviews complimenting everything from his fiery guitar chops, which range from delta slide to heavy rock, his unique vocals and songwriting skills, McGarvey’s live shows leave his audiences wanting more.

McGarvey was featured by the editors of Guitar Player Magazine twice during the Summer of 2008 in their magazine. He was voted “Best Musician” from Albuquerque The Magazine’s Annual “Best Of The City” Readers Poll in 2008, 2010 and 2012 (being voted Best Vocalist in 2009.)

In 2010, he was chosen from more than 4,000 bands from around the world to perform at Eric Clapton’s Crossroads Guitar Festival in Chicago.

From 2011-2012, McGarvey and his Band embarked on three very successful European tours to rave reviews. In 2013, he received the prestigiuous award of “Best New Talent” in the notorious Guitar Player Magazine. With a solid rhythm section backing him, McGarvey and his band are embarking on bigger and better things every day…

Atomic City Transit will provide rides to Pajarito Mountain during this year’s Skiesta!