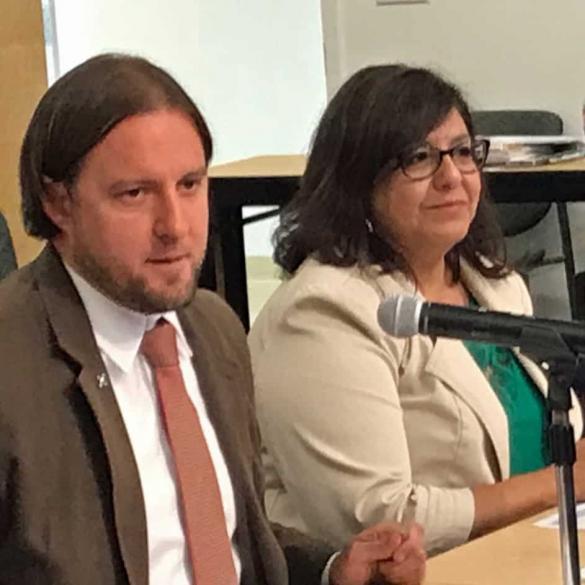 Just days after Gov. Susana Martinez, along with school and community leaders announced that nearly 25,000 more students are reading and doing math on grade level since the PARCC assessment was first implemented three years ago, Secretary-Designate of the Public Education Department Christopher Ruszkowski spoke to members of the Legislative Finance Committee at a meeting Wednesday in Los Alamos about student achievement results for the 2017/2018 academic year.

Ruszkowski said Achieve’s Proficient and Prepared Report released in May lists New Mexico as one of the most honest states in the country.

“We tell parents and families the truth about how our students are doing,” he said. “The PARCC test is widely considered the best available assessment on the market. It is the only assessment that has totally closed ‘the honesty gap’. What that means is when a kid gets a score on PARCC there’ll be a similar score on the ACT. They’re going to get a similar score on the SAT. So that we’re not going to get different scores. The United States Department of Education has acknowledged PARCC as one of the only assessments complying with federal rules governing how well assessments measure mastery of states’ academic standards.”

Ruszkowski said the cost for all assessments is about $12 million annually. That cost includes the PARCC, science, AP, early literacy, special education and Spanish SBA. He said $12 million is a very small number compared to other states and a very small price tag and if PED keeps using the assessment over time the cost will keep going down.

Ruszkowski said when PARCC was first started, 5,500 families refused the test and that number has dropped to 866. He said of that 866, 600 were in Albuquerque Public Schools and the remainder were in the other 88 of the state’s school districts.

“Let me give an example of what has happened when a state has decided that they want to switch exams because I know there is a lot of talk out there about exploring that. When Tennessee decided to do that, it cost them about $100 million and it didn’t go so well. Computers were crashing, thousands of kids didn’t get to take the exam,” he said. “We have a strong assessment. It can be better. There are always things we can do to make it shorter, faster, more affordable.”

He said what PED is most proud of is the progress among various student groups.

“Our Native American kids are the fastest growing group of kids, up 8.2 percent in reading and 4.1 percent in math. The majority of that growth is being driven by Farmington, Gallup and Central Consolidated Schools. Those are the three districts that are really showing progress,” he said.

Ruszkowski pointed to schools that are more than 80 percent Hispanic and 80 percent low income such as Union Elementary in West Las Vegas, which has 74 percent proficiency in reading.

“That’s 45 points above the state average in reading and that school is 99 percent low income and 85 percent Hispanic. Anthony Elementary School in Gadsden – 99 percent Hispanic, 100 percent low income, 69 percent proficient in reading. These results are showing us at the state what is possible when we follow best practices, when we work together. The same is true in math. Look at all the schools in Gadsen, in West Las Vegas, in Espanola, in Las Cruces that are high percentage low income, high percentage Hispanic and high percentage proficiency. A lot of schools are saying what is not possible and Gadsden is showing what is possible, regardless of background, regardless of income. Gadsden is probably the best example of that in the state of New Mexico,” he said.

Ruszkowski said if there are leaders they are among the state’s 10 largest districts, which serve more than half the state’s student population.

“Farmington is now the number one, highest performing district in the state of New Mexico amongst the large districts. When (former Los Alamos Public Schools) Superintendent Gene Schmidt joined us for the announcement Thursday in Rio Rancho he said, ‘We passed Rio Rancho,’ and then he said, ‘Look out Los Alamos’.”

He said Farmington, Gallup, Gadsden and Hobbs are a pretty diverse cross-section of districts in terms of geography and population and they have all shown double-digit gains since 2015 in reading and exceptional improvements in math as well.

“We still have a lot of districts that are still lagging behind,” he concluded.