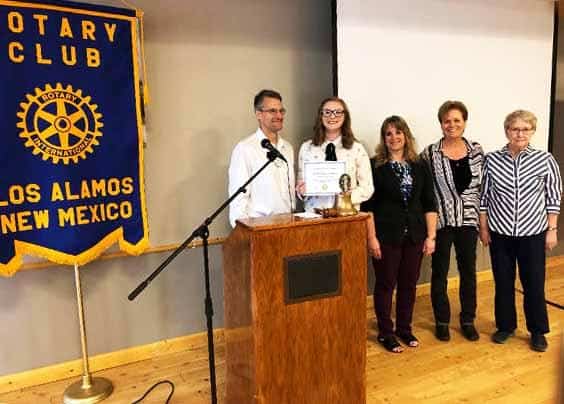 Rotary Club President Vincent Chiravalle congratulates Distinguished Student of Service Lauren Marinuzzi as her teacher Lori Thompson, mother Sharon Marinuzzi and grandmother Roberta Marinuzzi look on at a recent Rotary meeting. Photo by Kurt Steinhaus
ROTARY News:
The Motto of Rotary is Service Above Self. To support this, the Rotary Club of Los Alamos honors nine “Distinguished Students of Service” in their junior year of high school each academic year.
Students are first nominated by their teachers who are asked to select those who:
The Club then selects students based on demonstrated spirit of service and exemplification of the Rotary 4 Way Test: Is it the truth? Is it fair to all concerned. Will it build good will and better friendships? Will it be beneficial to all concerned?
Lauren Poague Marinuzzi was recently recognized as a Rotary Distinguished Student of Service. She is indeed one who has made service part of her life and is also a well-rounded student. Marinuzzi is a member of the Los Alamos High School (LAHS) Student Council, an officer in multiple LAHS dance groups, and the Service and Fundraising Captain for the Hilltalkers Speech and Debate Team.
She also is a student mentor in Link Crew, helping incoming students adjust to high school. In addition to these activities, Marinuzzi is involved with several school beautification projects and volunteers at the Los Alamos animal shelter.
Marinuzzi has been dancing for nine years and is involved with several high school dance groups, including ballroom, hip-hop, and K-dance. She also performs solo in various dance shows throughout the year.
Marinuzzi shared one of the challenges facing today’s youth: integrating incoming freshmen into the high school and making them feel welcome. In her Rotary essay, she wrote, “When I left middle school I felt absolutely isolated and afraid. I didn’t have a solid friend group, and none of the upperclassmen reached out to me. I believe that everyone should have a place to belong and feel safe. I’ve made a point to reach out to the incoming, new, and alone kids.”
To do so, she described several ways that she has helped to make the transition from middle school to high school easier for students. As part of Student Council, Marinuzzi is in charge of Lunch with Leadership, a group that is focused on new students, including students who relocated to the school district and foreign exchange students.
Food is provided, and members of the Student Council bring their friends so there are plenty of welcoming faces. On the Speech and Debate Team, Marinuzzi is the informal “den mother” and point of contact for new students from the middle school. She has worked to develop friendships with middle school students by spending time with them at speech and debate tournaments, so that their transition to being on the high school speech and debate team will be smooth.
The Rotary Club of Los Alamos feels that this is a very worthy effort and commends Lauren on her service to the youth in Los Alamos.
Marinuzzi was joined by her mother, Sharon Marinuzzi, her grandmother Roberta Marinuzzi and LAHS Language Arts teacher Lori Thompson, whom Marinuzzi named as the teacher who has had the most influence in her life.
Menu
Los Alamos
70°
Clear
5:48am8:23pm MDT
Feels like: 70°F
Wind: 9mph SSW
Humidity: 28%
Pressure: 29.91"Hg
UV index: 0
MonTueWed
93/66°F
90/64°F
91/64°F
Weather forecast Los Alamos, New Mexico ▸