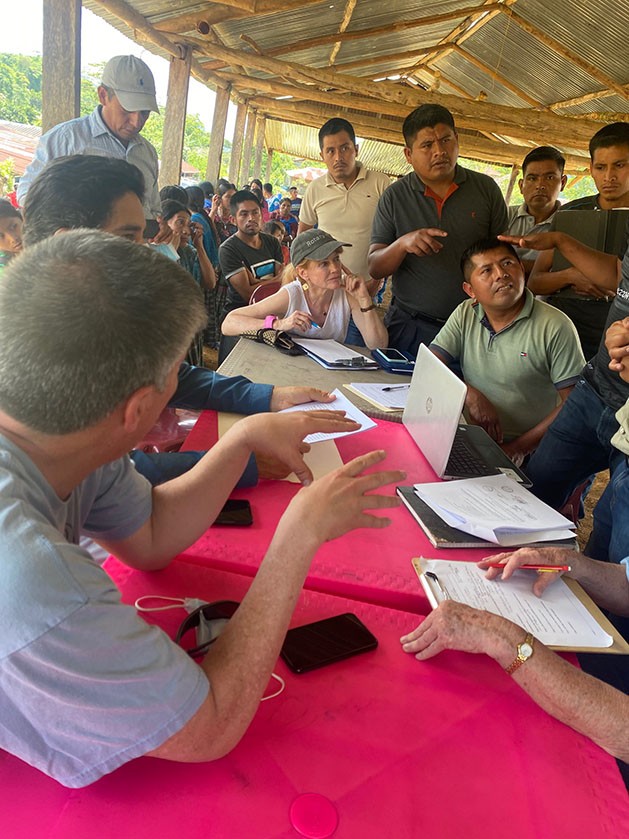 Deborah Simon of Rotary Team Guatemala 2022 listens as villagers propose projects that they and Rotary can work on together. Photo by Jim O’Donnell

Santa Fe Rotarians Deborah Simon and Dick Jones spoke at the July 19 meeting of the Rotary Club of Los Alamos about the April trek Team Guatemala 2022 (TG22) made to Uspantán, a municipality in El Quiché, an expansive department, similar to a state or province, in the country’s highlands.

TG22 was there to review the projects that began as a Rotary International Global Grant 25 years ago in this remote area of Central America.

Rotarian and professional photographer Jim O’Donnell and wife Kate of Los Alamos were part of TG22, providing photos for the July presentation. O’Donnell will devote a November Rotary meeting to the “long stories” behind his many exceptional photos of the people and places encountered during the April trip.

The area, which is populated primarily by indigenous Maya peoples who speak five different languages, is characterized by villages and community resources separated by treacherous terrain—steep mountainsides, deep ravines, and thick rainforests. This year TG22 visited the Zona Reyna in Uspantán, addressing a broken pipe in a water system and building a school kitchen. The village has no electricity.

Similar projects involving clean water, sanitation, education, and health care will proceed once TG22 has completed its community needs assessment. Typically, Rotary takes a three-pronged approach: the village provides manual labor, the department provides the land survey and engineering, and The Rotary Foundation provides the funding. For those projects that do not qualify under Rotary International’s policies, United by Friendship steps in to “fill the gaps”, Simon said, the organization’s founder.

In the Uspantán village of Buena Vista, a project has been proposed to rebuild the aging water system which can no longer meet the demands of the steadily increasing population. The clean-water systems Team Guatemala has provided in Uspantán have virtually eliminated cholera, a water-borne bacteria that causes diarrhea and severe hydration. If not treated promptly, it is fatal.

While in Uspantán, TG22 arranged for the purchase of a motorbike for one community, the most efficient means of travel on the nearly impassable roadways in the area; in-home bathrooms are being built in the village of Joya Verde; and in previous years other Teams Guatemala provided an ambulance and an ultrasound machine for an area hospital. TG22 Rotarians witnessed the ultrasound’s life-saving capabilities when a new mother introduced them to her healthy baby after she experienced severe complications in childbirth.

The Rotary Club of Los Alamos, the first local club to support this project, has been impressed by the lasting humanitarian service given to Guatemala and is pleased its members continue to provide funding and hands-on involvement in Uspantán.

Simon was raised in Guatemala, the daughter of missionaries. During her childhood she recognized the great need for accessible health care and was then inspired to study nursing at the University of Oregon.  Simon, who was the director of a home health and hospice agency; she recently retired from Presbyterian Española Hospital.

Simon is best known in Rotary District 5520 for coordinating Rotary global grant projects in Guatemala, which she has been doing since 1997. She was a member and past president of the Rotary Club of Española and joined the Santa Fe club in 2013. Simon was awarded the Service Above Self award by District 5520 in 2007. Most recently she was made an honorary member of two Rotary clubs in Guatemala.

In 2004 Simon established a non-profit organization, United by Friendship, which focuses on partnering with Latin American communities to work on projects that Rotary does not fund. Most years, Simon leads volunteers, Team Guatemala, to visit project sites for needs-and-sustainability assessments and to check on the status of past projects.

Jones, a member of the Rotary Club of Santa Fe since 1988, has served as its president, as well as Governor for District 5520. He is the recipient of many Rotary awards, including the District’s Rotarian of the Year award and the Service Above Self award. In addition to leadership and youth programs awards, Jones was recognized as District 5520’s first Rotarian of the Decade. Jones has also served on numerous Rotary councils, task forces, and selection committees.

Jones holds a BA in Journalism and Mass Communications from New Mexico State University and pursued a career in the photographic industry for 37 years, operating his own retail photographic business in Santa Fe for 25 years.

For more information about Team Guatemala, contact the Rotary Club of Santa Fe.

To learn about the work of United by Friendship go here.

The Rotary Club of Los Alamos, through its Club Foundation, is a 501(c)3 non-profit and one of over 34,000 clubs worldwide. Rotary, which now has 1.5 million members, was founded in 1905; the local Club was chartered in 1966. Rotary areas of focus include promoting peace; fighting disease, particularly polio; providing clean water, sanitation, and hygiene; supporting education; saving and enhancing the lives of mothers and children; growing economies; and protecting the environment.

The Rotary Club of Los Alamos meets in person 12-1 p.m. Tuesdays, in the Community Room, Cottonwood on the Greens, at the golf course. A Zoom option is available by contacting Rotary Club Vice President Linda Hull at 505.662.7950. Hull also is happy to provide information about the Club and its humanitarian service. 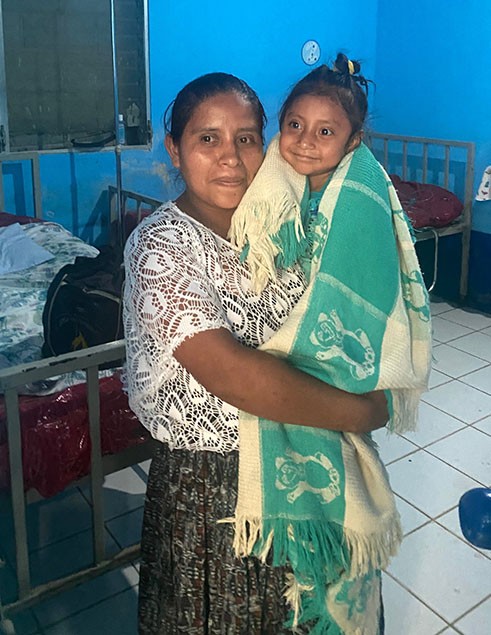 A mother and child in one of the clinics in Guatemala supported by Rotary Team Guatemala 2022. Photo by Jim O’Donnell