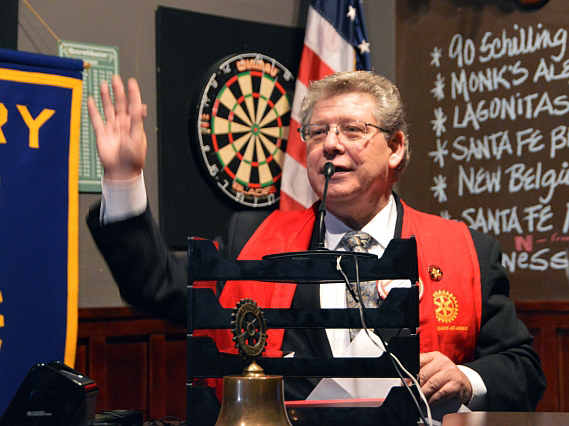 Los Alamos Rotarian Gary DeRosier Served Air Force One for Presidents Nixon, Ford and Carter. Photo by Carol A. Clark/ladailypost.com
By CAROL A. CLARK
Los Alamos Daily Post
When the call went out for volunteers for a special detachment at Andrews AFB for ground crews on Air Force One, Gary DeRosier put in for it and was selected.

“I was with President Nixon, then Ford, then President Carter. Also some  Heads of state,” DeRosier said during his presentation at Tuesday’s Rotary Club  meeting. “I worked the planes for the Queen of England, Ministers of Russia and Shah of Iran. I took care of everything except maintenance and fuel on Air Force One, AF 2, the congressional fleet, and aircraft of heads of state from all over the world and it was lots of fun.”

DeRosier recalled doing everything from rolling out the red carpet to setting up press fences, driving the catering truck and helping stewards on the airplanes.

“We were never to approach or touch the President … Mondale did shake my hand once,” DeRosier said.

DeRosier is a relatively new member of the Los Alamos Rotary Club and was giving his classification talk, sharing details of his life with the membership.

“I stand here in a room full of scientists, scholars, teachers, self-made business women and men, educated spouses, and I am honored to speak before such a distinguished group of fellow Rotarians,” DeRosier said.

Like Voltaire’s Candide, DeRosier said he also has tried a number of adventures and that the military was most influential. He joined the Air Force with advice from many to avoid the draft to Viet Nam.

“My father suggested to not go into the Navy, I would have to scrub decks and the like, others stated to avoid Vietnam as an army draftee, I should join the Air Force or Coast Guard as soon as possible,” he said. “So, I signed up to be in Air Passenger Service at the airports manifesting passengers. However, six weeks basic then six weeks technical school and I was in Vietnam. I shocked fellow soldiers who met me as I seemed a bit young. I went to Danang, Vietnam … also known as Rocket City … and we got rockets.”

It was during this time that DeRosier fell in love with flying. He met a group of Marines who ran a helicopter landing pad not far from Danang. On his days off, DeRosier would hop helicopter rides on twin bladed helicopters.

“The load masters would lower the back electric ramp and use tie down straps around my waist so I could partially hang out the back edge and take pictures of the mountains and forests below – it was lots of fun,” he said.

DeRosier went on to volunteer for duty in Phu Bai, a remote airport in the north just a few miles from the Demilitarized Zone.

“I slept with an M-16 and hand grenades alongside my bed,” he said.

DeRosier told the group that his legs are just 20-inches long but when mortars came at night and he had to run to the bunkers, nobody could outrun his short legs, he said laughing.

DeRosier met his wife Brenda, who also served in the Air Force. Her mother owned 200 acres of land in Oklahoma. When the couple returned to civilian life, his mother-in-law sold him 25 acres along the North Canadian River in Shawnee, Okla., filled with turkey, deer, thousands of trees and forest animals.

He and his wife once planned to build a home on the property about 30 miles from Oklahoma City but when Brenda finished her master’s degree, see wanted to see what she could do with it. She applied and was hired for a two-year tour in 1984 with Los Alamos National Laboratory as a computer system’s analyst.

“I fell in love with the mountains … loved it and wanted to stay,” DeRosier said. “I told her if they offered her a job to take it.”

She did take a job at LANL and the couple moved to New Mexico and DeRosier went to work for a CPA firm in Santa Fe auditing credit unions. Employees at banks and credit unions do not like auditors, he said, and because he is a people person, it was not a good fit.

DeRosier took a job with Sandia Savings and Loan as a branch manager, not knowing they had already gone under, he said. He worked under the guidance of the Resolution Trust Corporation who took over Sandia Savings and Loan. Around 1990, Bank of America bought out the failed S&L and he stayed on for five more years.

In 1995, First National Bank of Santa Fe offered DeRosier the position of president of its Los Alamos branch where he remains today.

Dec. 12, DeRosier will become a member of the board of the Rotary Club of Los Alamos.