Roger This: Turning Off The Gridlock Key 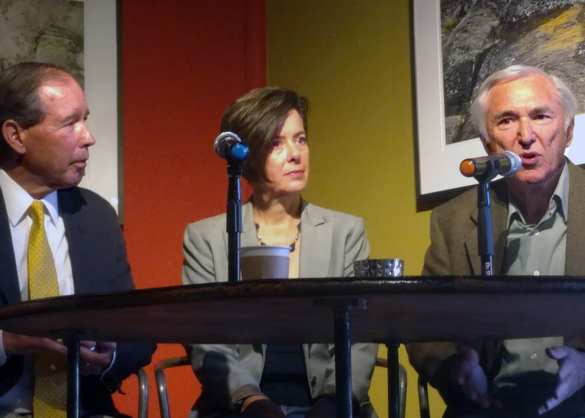 Rebecca Mercer is one of the most powerful women in politics, according to Kenneth P. Vogel and Ben Schreckinger in a story in Politico Magazine ((9/7/16). She is the daughter of billionaire Robert Mercer, who grew up in New Mexico and graduated from the University of New Mexico, before going on to make his fortune in voice recognition software, hedge funds and big data.

Big money has enabled the Mercer father-daughter team to make a singular impact in American politics, bestowing large contributions on political action committees and sponsoring alt-conservative, anti-Republican establishment causes, most notably Sen. Ted Cruz’s bid for the GOP presidential nomination and, since mid-August, the presidential campaign of Donald Trump. The Mercers are credited for bringing in a new campaign management team including Steve Bannon of Breitbart News as CEO.

As part of the management overhaul, Trump uses the Mercer’s data analysis company, Cambridge Analytica, which claims its big data computation enables customers to micro-target individual voters with winning “psychographic” messages. A little deeper in the reports, one can find a connection between Cambridge Analytics and SCL Group, a British firm, which is the kind of company one might employ to foment a coup or fool an army.

In all, a POLITICO analysis found that the Mercers have made $73.5 million in disclosed, politically-oriented donations since the Supreme Court’s January 2010 Citizens United decision paved the way for unlimited political spending through super PACs and other nonprofits. Of that, $39 million came in donations to political candidates and committees from members of the family, and $34.6 million came from the family foundation to conservative nonprofits.

That tally doesn’t come close to approaching the combined spending of the Koch network, which expects to spend $750 million in the run-up to the 2016 election. But the Mercers’ spending does put them in league with donors like fellow New York hedge fund tycoon Paul Singer and members of the Ricketts family, who have become gravitational centers in conservative politics. And that’s even before considering the Mercers’ investments in Breitbart News and Cambridge Analytica, for-profit companies that don’t disclose investors but that could have a greater long-term impact on conservative politics than any given campaign or nonprofit group.

While one might argue which part of the political spectrum has most used or abused the big money phenomena in American politics, it should be emphasized that the problem of money is not the exclusive domain of either of the two major parties.

On Oct. 11, Justin Elliott, writing for the investigative journalism newsroom, ProPublica, did a story on “The American Way,” with the subhead, “President Obama promised to fight corporate concentration. Eight years later, the airline industry is dominated by just four companies. And you’re paying for it.”

In short, according to ProPublica, “The Justice Department’s abrupt reversal came after the airlines tapped former Obama administration officials and other well-connected Democrats to launch an intense lobbying campaign, the full extent of which has never been reported.”

Same class of culprit, different angle: Big money, powerful interests, revolving door connections – that helps explain how the nine major airlines have been cut down to four, according to the exposé about the complaints which we have all been making for years, that the airlines are using copycat schemes to hike ticket prices and add new fees, while pruning services and amenities.

What can be done? Chances are, if there is not enough money to buy an outright victory on an issue, there may well be enough to gum up the works.

As Bruce Berlin, a long-time public-interest lawyer said during a roundtable discussion at Collected Works in Santa Fe last week. “Congress gets nothing done and we don’t know if it ever will get anything done.”

According to the combined wisdom of this highly qualified panel, if the problem is “big money,” the solution is democracy.

“All of you are committed citizens,” Udall greeted the standing-room crowd. “What would you like the government to do that it isn’t doing? Whatever it is, you’re never going to get it, until and unless there is campaign finance reform.”

Udall happens to have a package of measures that he has been working on for a long time that pulls it all together. The package includes a draft of a proposed 28th Amendment to the Constitution that would undo the damage from the Supreme Court’s Citizen United decision, which critics say unleashed the monster of big money in 2010.

Udall’s prescriptions also include a bill to increase transparency in campaign finance reporting and along with a companion bill, to replace the “completely broken” Federal Election Commission with effective oversight and enforcement mechanisms. A fourth provision would reform campaign finance with a program to leverage small contributions (up to $200) with six times that amount in matching public funds. Another piece would bring an end to “revolving door” advantages by which elected representatives and government officials depart from their offices and positions and cash in as lobbyists for special interests. An additional measure would end gerrymandering, in which representational districts are jiggered to stack the deck in favor of one or another of the parties.

Noting that state government in New Mexico, like the federal government, has many anti-democratic impediments in the areas of election finance and public disclosure, Harrison said, “Elections should be about the quality of our ideas, not the size of our checkbooks or bank accounts.”

She mocked the shibboleth, often used to argue against voting and voter reforms no matter how many times the unsubstantiated claim is made about somebody voting from the grave. “The live people aren’t voting. Why not let the dead people vote,” she joked.