Roger This: Stand, Tread Or Fidget 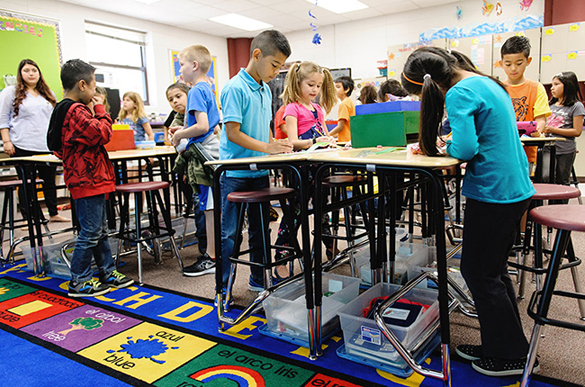 Standing desk. Courtesy photo
By ROGER SNODGRASS
Los Alamos Daily Post
In recent years, concerns have grown around the country about the widespread health risks associated with our sedentary work lives. Two researchers from the Endocrine Research Unit of the Mayo Clinic looked into the question of “How Much Do We Really Sit?”
Writing in the journal Obesity in 2009, they expressed what may seem like an obvious fact: “Work days are associated with more sitting and less walking/standing time than leisure days.” One of many piece-meal studies that has left open lot of questions from an occupational health perspective, the authors found enough of a difference to conclude, “We need to develop approaches to free people from their chairs and render them more active.”
In a newly released poster for a pilot study on Treadmill Desks at LANL, Samara Fellows identified for a student symposium many of the issues related to the chair-bound existence of typical office workers, noting for example that “sedentariness is the largest preventable contributor to premature death, eclipsing smoking in recent years.” A graduate of New Mexico Highlands, Fellows has worked as a post-bachelor student at LANL on her way toward realizing her long term goal of becoming a physician assistant.
While treadmills are now ubiquitous in the gym, and becoming more common in the home, the hybrid known as a treadmill desk remains a relatively new concept, combining a controllable walking track with a flat work table into what one manufacturer has called a “walkstation. The idea was to provide participants with access to a treadmill desk that would let them amble along at two mile per hour, while performing a work-related task like reading email.
Fellows hypothesis was that the exercise apparatus would be used without daily reminders and that improved health indicators would show up in conventional metrics like lower blood pressure and smaller waist/hip circumference.
These good intentions were somewhat outweighed by what was perhaps an unforeseen difficulty, which was that despite their commitment and formal consent, the all-too- human participants did not participate enough to provide adequate data to conclude any results. As Fellows documents a year of activity, only one person in the study group clocked in one time in December 2014, when the record-keeping began, and nobody in the second month.
March saw a revival of interest as three individuals participated in 17 sessions among them, followed by six people in 21 sessions in April and five people in 26 sessions in May. After May, she observed, “no data was recorded by any individual, so actual use could not be determined,”
Interestingly, an unofficial cohort of non-study users began dropping by during the early months of the experiment, recording 49 visits, or 42 percent of all visits.
What is commendable about the report is that despite the desultory results, the investigator made something worthwhile out of the experiment. Without blaming her subjects, she wondered if the treadmill desks were too inconveniently located, or if the requirement for reserving time or the transit time was too much for those who did not have a station in their building. She suggests more people may have used the equipment if they had their own desk, but notes that because of the apparent lack of interest, the treadmill desks would not be a readily available fixture at Los Alamos.
Riley Splittstoesser, the Ergonomics Program Lead, who assisted Fellows, gave her credit for designing the experiment and training people how to use it safely. He said the participation curve was very much like it is for other physical improvement projects. “There is real interest when you start a diet, but then the interest drops off,” he said.
What else is there? One option that some people are choosing is a standing electric desk, something that can be adjusted to a comfortable height. Texas A&amp;M has been especially interested in studying the effects of standing desks on children in school and on productivity in the workplace, both of which have proven positive.
The Mayo clinic has claimed a share of credit for the “Fitbit” craze that has made body-sensing technology an ally in the fitness fight. Dr. James Levine, a well-known Mayo Clinic physician helped popularize the treadmill desk, but he also came up with the idea of a way of digitally measuring extraneous bodily movement in calories. Fidgeting, or Non Exercise Activity Thermogenesis, trademarked as NEAT™, may actually help us reduce those surplus calories that our new-era lifestyles are not otherwise prepared to handle.
Previous
Next
Menu
Los Alamos
52°
Fair
7:20am6:18pm MDT
Feels like: 46°F
Wind: 13mph W
Humidity: 29%
Pressure: 30.14"Hg
UV index: 0
FriSatSun
63/45°F
68/48°F
64/30°F
Weather forecast Los Alamos, New Mexico ▸
Previous
Next