Roger This: Science And Politics Mix It Up 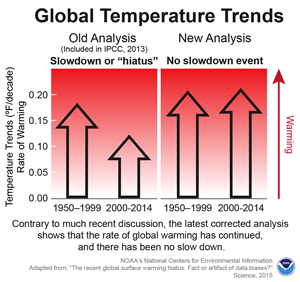 Roger This: Science And Politics Mix It Up

A new “hockey stick” argument erupted this summer on Capitol Hill, as Rep. Lamar Smith (R-Tex.), chairman of the House Science Committee faced off with officials of the National Oceanic and Atmospheric Administration (NOAA) for the last several months over a climate study published in Science magazine in June 2015.

The new study, “Possible artifacts of data biases in the recent global surface warming hiatus,”offered a revised version of historical land and sea temperatures that used new data and arrived at a result thatcontradicted an apparent “cooling” trend that the Intergovernmental Panel on Climate Change had observed in their most recent assessment.

The so-called “hiatus” fueled arguments by climate change skeptics that their rivals were sneaking in a false flag on the eve of a major United Nations climate conference, set to begin in Paris Nov. 30.

More salt in the wounds of climate skeptics, the new study, led by Tom Karl, the director of the NOAA National Center for Environmental Information, found not only that global surface temperatures have significantly warmed since 1998; contrary to the IPCC, but to top it off that 2014 was the warmest year on record.

On July 14, 2015, Chairman Smith began to demand an explanation for the corrections. In a letter to NOAA Administrator Katherine D. Sullivan, he asked for the following buckets of information:

In letters Sept. 10, and 25, according to the Nov. 10, 2015 FYI bulletin of the Physics, which has carefully documented this escalating confrontation, Rep. Smith ratcheted up his request and then threated compulsory action, which followed in a subpoena Oct. 13.

Jeff Tollefson, former science reporter at the Santa FeNew Mexican, now a staff writer at Nature magazine picked up the story and related that NOAA officials did provide the committee with data that was publicly available, but did not submit the communications.

“It is a long -standing practice in the scientific community to protect the confidentiality of deliberative scientific discussions,” NOAA explained in a statement Oct. 27, according to Tollefson, but the agency added that it had no intention of turning over documents that could be misused against the participating scientists.

“It is perhaps no surprise that, with a month to go before the start of the international conference in Paris to control carbon emissions, the House Committee on Science, Space and Technology has issued a subpoena to Tom Karl, Head of the National Centers for Environmental Information,” wrote Raymond S. Bradley, director of the Climate Research Center at the University of Massachusetts in a Huffington Post opinion piece.

A veteran of the first hockey stick battle, a fiercely disputed episode in the ongoing climate wars, along with his colleagues Michael E. Mann and  Malcolm K. Hughes, Bradley subsequently wrote the book, Global Warming and Political Intimidation, about his experience defending their collaborative study. Probably more than any other single paper, their “Mean annual temperature reconstruction of the Northern hemisphere in the 20th century,” helped turn the tide of climate awareness in the United States.

The current test of wills has gone on and will continue to go on and may yet produce something productive, but what I think is going on here is this: While suspecting a political motive behind a set of actions by political opponents, a congressional committee left its own political intentions undisclosed while going off on deep sea fishing expedition with as wide a net as possible.

In real life, illegal drift nets can be something like 50 feet deep and 55 miles long. They make no distinction between species, so they catch fish indiscriminately, along with any other kind of animal that falls into their snare.

Comparable to illegal deep sea drift net fishing, the drift net technique of congressional inquiry is a form of informational plunder. Clarification and transparent communication are essential, but intimidation and abuse of power have no place in the scientific arena.