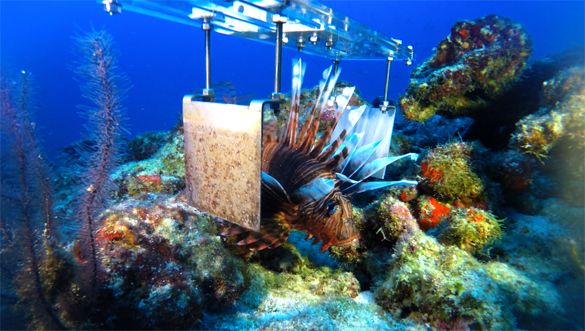 Courtesy photo
RISE News:
A US non-profit company has designed an innovative method of controlling the spread of lionfish threatening to devastate fish stocks and coral reef ecosystems in warmer ocean waters.

Robots In Service of the Environment (RISE) joined deep ocean research charity, Nekton, on its maiden voyage in the North Atlantic to test a prototype being developed to operate remotely in deep water to locate and deliver a fatal electric shock to the invasive species.

Nekton’s research vessel was off the Bermudian coast conducting the XL Catlin Deep Ocean Survey, a pioneering multi-disciplinary marine research programme assessing the health and resilience of the deep ocean.

RISE, a start-up born in the robotics industry, joined Nekton’s team of scientists to observe how the lionfish reacted to the prototype electrical paddles which will deliver the current. Once the fish’s behaviour is understood the paddles will be connected to an underwater robot operated via video link. The carcasses will be collected for disposal or sold at market.

The lionfish, whose Latin name is Pterois, is native to the Indo-Pacific. Artificially introduced by humans, it is estimated that there are more than one million off the coasts of Florida, Bermuda and throughout the Caribbean where they face no natural predators. And now the voracious species is being sighted increasingly in the Mediterranean.

Lionfish devastate local fish populations in non-native waters because they are not recognised as a threat by native juvenile fish and crustaceans. This makes it easy for them to indiscriminately gorge, eating as much as half their body weight per day. Sexually mature at just 12 months, females spawn approximately 30,000 eggs every four to five days.

Scientists are considering invasive species as part of the XL Catlin Deep Ocean Survey research programme. Dr Lucy Woodall, Nekton’s Science and Logistics Lead, from the University of Oxford, said: “Lionfish populations are increasing in non-native waters at a disproportionate rate. Ecosystems suffer as lionfish devour the small fish leaving nothing for the other marine animals to feed on.

“They also prey on herbivores who feed on reef algae ensuring their growth is kept in check. Without this crucial link, the algae growth smothers the coral, blocking sunlight which eventually kills the coral reef.”

​B​ermuda is a leader in lionfish culling. Chris Flook, Department of Environment and Natural Resources, the Government of Bermuda, said: “Currently there isn’t an effective way to conduct mass culling. We have spear fishers with special permits that catch lionfish on shallow reefs but lionfish survive at depths beyond the reach of recreational divers. ”

RISE’s Executive Director John Rizzi said the paddle test was a success. “Lionfish are not naturally afraid of anything so they swam in and around it. Once we have completed a number of similar trials over the next 9 months, we intend to build our first commercially viable ROVs.” 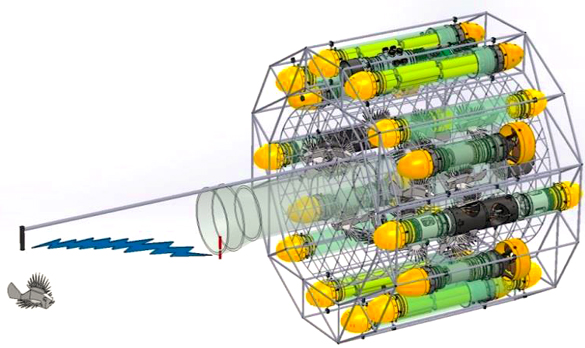