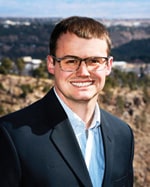 We all know the tale, in 1943 scientists and military officials came to the Pajarito Plateau to work on the Manhattan Project and bring the atomic bomb to life. Then, in the deserts of southern New Mexico, their work brought the world into the atomic age. Seventy-five years later, Los Alamos National Laboratory continues to bring new discoveries and technology to the world.

Not only has this laboratory had a profound effect on the world, but also on my life. I am a third generation “labbie” and it is likely that without the opportunity and work done at our laboratory, I would not be here.

My maternal grandparents Elbert and Carolyn Colston moved to Los Alamos in September of 1961, so my grandfather could assist in the PHERMEX project. Like so many others during that time, they were assigned housing and called a concrete efficiency apartment home.

In 1962, they gave birth to my uncle Michael and my mother Sherilyn in 1963. During this time, they would become very active in the Los Alamos Church of Christ and witnessed President Kennedy’s visit to the Laboratory in 1962.

In 1966, the small family would move down to Las Cruces, so my grandfather could continue his education. However, they returned to Los Alamos in 1969 where my grandfather worked on the LAMPF project, established the Laboratory’s Metrology Laboratory, was promoted to deputy division leader in the MEC Division, took the first artificial intelligence class, and helped lead the effort to develop a knowledge-based model of the weapons production complex.

My grandmother worked for both the Zia Company and the Laboratory. At the Laboratory she worked for the personnel department, M-7, MP-8 and N-2. During this time, my grandparents moved down to White Rock and welcomed their third and fourth children, Kara and Robert Colston. Then, in 1988, my grandfather received a new opportunity from Kennamatal, and with my aunt and uncles, moved out east.

However, my mom, who had already begun a family in 1982, remained in Los Alamos. In 1990, she would find herself working as a contractor for LANL. She would then be converted in 1995, working for the Travel and Relocation Office.

My great grandfather Robert Robinson first came to Los Alamos after World War II and helped in the construction of the hospital and bio building. In 1966, my fraternal grandparents, Thomas and Betty Robinson, came back to Los Alamos with my father Richard and uncles Brian and Brett. Settling in White Rock, my grandfather would own and operate the Exxon Mobile gas station near Rover, and work for LANL as a radiological control technician for the Omega West Reactor, the VanDeGraph Facility and TA-15. My grandmother would work for a dental office in White Rock.

After starting our family, my father would join LANL in 1983 as a student. He would soon be hired as a regular employee and continue to work as a photographer for the next 35 years. Just this last spring, he retired from LANL.

In August 2008, I would begin my own career at LANL as a student for the construction estimating group. After graduating in 2005, I would be hired as a fulltime employee. I continued to work for estimating until 2017, when a new opportunity lead me to Occurrence Investigations.

LANL has provided not only me, but my entire family a stable place to live and work. The effect of our laboratory spans generations of families across the world, and I am honored to continue assisting in its mission. As a councilor, and “child of the atom”, I will fight hard for our laboratory and community. Los Alamos is not just where I work, but my home.