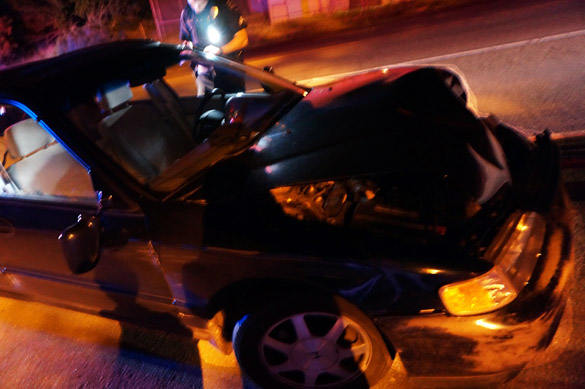 A truck driver apparently overcome with road rage on the Main Hill Road on June 12, intentionally rammed into this Honda Accord, crumpling its hood, damaging the radiator and frame before fleeing the scene. Courtesy photo

A man driving a truck apparently went berserk about 11 p.m., June 12 on the Main Hill Road coming into Los Alamos.

“Coming up the Hill just above the curves, a new model light colored truck that had been tailgating the two of us in my Honda Accord decided to pass us at East Gate,” said (James) Roger Smith, a visiting scientist from Seattle, Wash.

Smith, 58, explained that he heard the driver rev his engine to pass and since passing is not permitted in that stretch of roadway he moved over a bit toward the right to give the driver room on the left and acknowledge his desire to pass.

“Unfortunately, his intentions were to pass quickly on the right using the turning lane, which did not give him much distance,” Smith told the Los Alamos Daily Post. “We sideswiped each other, sustaining little damage but my mirror was torn off and the side of my car scuffed.”

Smith stopped his car with his passenger Anna Marie Solomon inside. The truck, which he describes as large in size, stopped about 20 feet ahead, he said. The driver got out yelling as he came toward Smith’s car.

“As I was rolling down my window, he sucker punched me,” Smith said. “He went back to his truck, put it in reverse and rammed my Honda Accord with both of us inside. His truck crumpled the hood of my car, bent the radiator and frame … using sufficient force to flattened one of my tires. My car is totaled.”

The enraged driver began to pull away, looked back at the damage he inflicted and drove off, Smith said.

“I would never believe this could happen in Los Alamos,” Smith said. “Physical assault, assault with a vehicle and willful unwarranted destruction of a car … this person probably lives in town and I hope someone spots him driving around and reports him to the police.”

Smith got the last three numbers of the New Mexico license plate on the truck – 582 and called police. Police arrived at the scene and took a report but told Smith they need the complete set of numbers to search a license plate, but that their investigation is continuing.

The driver of the truck remains at large. Anyone who spots a newer model truck (resembling a GMC Denali HD 1500) light in color with a license plate ending in 582 is asked to call police at 505.662.8222; callers can remain anonymous. 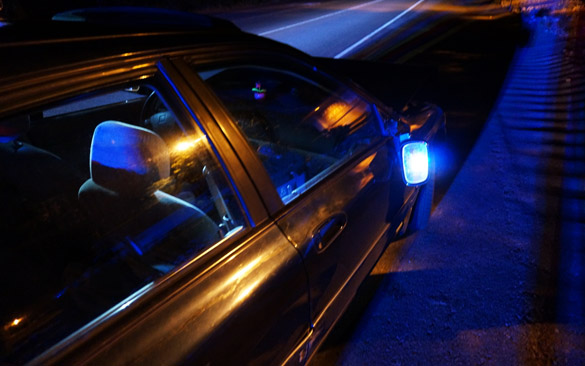 During a June 12 road rage incident on the Main Hill Road near East Gate, a frenzied truck driver attempted to pass on the right, sideswiping this Honda Accord and breaking its side mirror. Courtesy photo