Ringside Seat: Senate Leader Kills Own Bill In An Hour 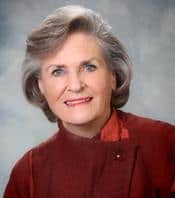 Senate President Pro Tempore Mary Kay Papen
By MILAN SIMONICH
msimonich@sfnewmexican.com
The whirlwind at the strangest place in New Mexico began at 7:25 a.m. Thursday.
Mary Kay Papen, the 86-year-old president pro tempore of the state Senate, arrived at her spacious office in the Capitol. Papen means it when she says she has an open-door policy.
So I buttonholed her to ask about a controversial bill she had introduced. The measure, Senate Bill 127, would prohibit out-of-state retailers from shipping alcohol to customers in New Mexico.
What led Papen to carry this bill, targeting this particular business sector? She said John Thompson, a lobbyist from Albuquerque, had asked her to introduce the measure.
Thompson represents a couple of wine wholesalers.
Papen, D-Las Cruces, eventually told me her interest in the bill was to protect New Mexico wineries.
“The concern was to get a level playing field for our in-state growers,” she said.
Wineries didn’t have much of anything to do with her bill. Wholesale liquor sellers were at the heart of it.
Papen persisted. She said sales transacted over the internet by out-of-state retailers aren’t subject to state taxes. Yet storefront retailers in New Mexico must add a tax on in-person sales.
“Some people even buy their milk on Amazon,” Papen said. “I want any way to increase our tax base in New Mexico.”
But if all sales conducted on the internet are the issue, why did her bill pinpoint out-of-state retailers selling imported wines and other alcoholic beverages that typically aren’t available in hometown stores?
“We’re looking at the bill to see if and how it moves,” Papen said.
She made a couple other comments about the bill’s path, but then said they were off the record. Normally I would have contested the idea of an experienced politician trying to pull back statements that had been made during an on-the-record interview. But I had to find Thompson.
I wrote a note to him on his website, asking about his lobbying company’s involvement in the bill. Before I could set out to try to find him, a security officer in the Senate told me I had been paged. The voice over the loudspeaker had a hard time pronouncing my name, but the officer was pretty sure I had been summoned by Papen.
I re-entered her office at 8:27 a.m.
“We’re dropping the bill,” she said.
Why now, all at once?
Papen said more homework might be necessary.
Her bill had already cleared the Senate Corporations and Transportation Committee. But now, she said, she will direct the Judiciary Committee to table it. That means it’s dead.
At 9:06 a.m., Thompson spotted me on the third floor of the Capitol.
“We’re dropping the bill,” he said.
So I heard. Why?
Thompson had no other comment.
I phoned Tom Wark, executive director of the National Association of Wine Retailers. His organization, based in Sacramento, Calif., has been fighting Papen’s bill with all its might and a barrage of emails.
Wark was happy to learn that Papen had decided to kill her own bill.
“This was purely a wholesaler-driven issue,” he said.
In his view, consumers are the winners in the bill’s demise. Papen’s proposal, in concert with lobbyist Thompson’s interests, would have stifled retailers.
A legislative staff analysis of the bill stated that the state Regulation and Licensing Department “advises that wines are currently being shipped into the state from third-party aggregator platforms like Amazon. Likewise, license holders in reciprocal shipping states are permitted under existing law to ship directly to New Mexico residents without any kind of permit. SB 127 would prevent these sales.”
Wark says that assessment was wrong in part. Amazon does not sell or ship wine to consumers.
But under Papen’s bill, consumers no longer could have ordered a hard-to-find Bordeaux, a rare burgundy or any other wine from an out-of-state store.
Under existing New Mexico law, wineries pay $50 for a yearly permit to ship their products directly to customers in the state. They also remit a gross receipts tax to the state.
Out-of-state wine stores are not allowed to obtain such a permit. They send their shipments without government oversight.
“They’re as unregulated as you can get,” Wark said.
Legislators might have revised that system. They could have charged retailers to obtain a permit, thereby evening the competitive balance.
Instead, Papen’s bill would have assisted wholesalers at the expense of other businesses.
That’s life at the Capitol — a place famous for going to extremes.
Ringside Seat is an opinion column about people, politics and news. Contact Milan Simonich at msimonich@sfnewmexican.com or 505.986.3080.
Menu
Los Alamos
34°
Fair
7:13am6:28pm MDT
Feels like: 34°F
Wind: 0mph NNE
Humidity: 37%
Pressure: 30.44"Hg
UV index: 0
SunMonTue
64/46°F
64/41°F
59/36°F
Weather forecast Los Alamos, New Mexico ▸