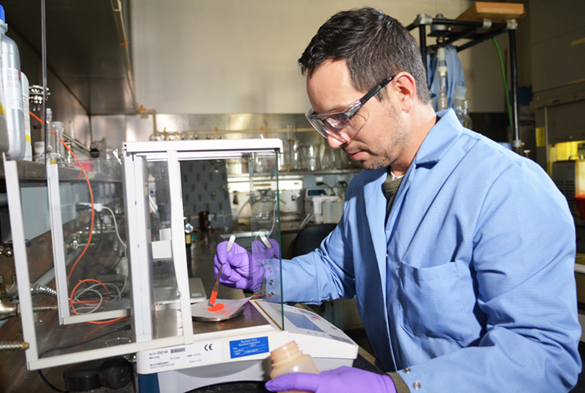 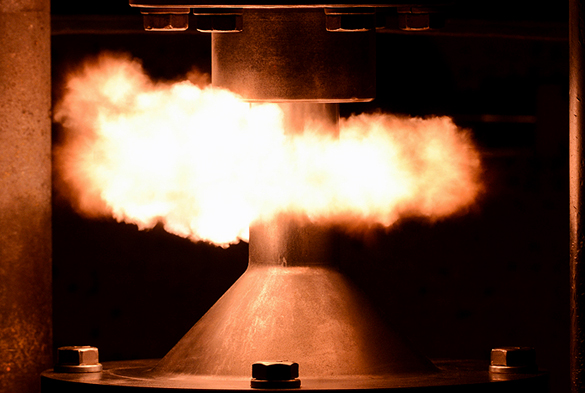 A small amount of explosive material is subjected to shock wave with a striker plate to induce detonation. An explosive material’s insensitivity — it’s resistance to accidental or unintended detonation — is one set of data measured using this type of test. Photo by Daniel Preston/LANL

Los Alamos National Laboratory explosives chemist David Chavez has synthesized a pair of novel molecules, one possessing a unique fused three-ring structure. These materials could usher in a new class of explosives that provide high-energy output with enhanced safety.

“There is a general trend that the higher the performance of an energetic material, the more sensitive the material is to insults such as impact, spark and friction,” Chavez said. “The Laboratory is interested in creating and understanding the science of ‘outlier’ materials which do not follow this trend.”

The research is published as the cover article in today’s issue of the prestigious German applied chemistry journal Angewandte Chemie International Edition.

In the article Chavez, of the High Explosives Science and Technology group, details two materials never before synthesized, the first, a dinitro-diamino compound, displays performance approaching that of conventional high performance materials, but is insensitive to impact spark and friction, making it very safe to handle.  The second molecule, a new heterocyclic ring system called a tricyclic 1,2,3,4-tetrazine, is more like a conventional energetic in performance and safety, and forms the foundation of the synthesis of future materials of similar structure.

“The materials could have applications where almost any kind of energetic is needed,” Chavez said. “These could replace explosives and propellants that can’t meet today’s safety requirements. Over time, explosives safety is becoming more and more important, particularly in propulsion, some military applications and in the mining industry. It’s also highly desirable to find a energetic materials that require less quantity, maintains high performance, are insensitive and aren’t adversely affected by large temperature changes.”

Chavez worked for more that two years on his idea of a unique molecular arrangement of the Carbon, Hydrogen, Nitrogen and Oxygen elements that are the basic constituents of all explosives.  The insensitive nature of the dintro-diamino compound comes in part from extensive hydrogen bonding among the molecules.  This effect is similar to the glue of a “post-it” note.  The glue (hydrogen-bonds) is strong enough to keep the molecules intact, but weak enough that the molecules don’t break down – initiating detonation – when the molecules are pulled apart during destructive stimuli, enhancing safety.

“There were a lot of different ideas about how to isolate and confirm the right structure,” Chavez said, “learning along the way from every experiment that doesn’t work, then eventually having success. One of the great things about Los Alamos is having the ability to push the frontiers, to do the new thing that no one’s been able to do before.”