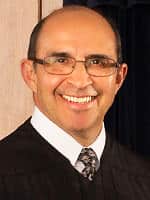 Edward Chávezo
NMSC News:
ALBUQUERQUE ― Retired Supreme Court Justice Edward Chávez was elected July 26 as chairperson of the Bernalillo County Criminal Justice Coordinating Council (BCCJCC), which has helped develop reforms in the criminal justice system under way in Albuquerque.
Second Judicial District Court Chief Judge Nan Nash will serve as vice chair of the 11-member council.
Artie Pepin, director of the Administrative Office of the Courts, previously chaired the council and will continue to serve as a member. Former Justice Chávez retired from the state’s highest court in March. The chairperson is a non-voting position.
The council is made up of all the partners in the Albuquerque criminal justice system and serves as forum to collaboratively improve the system to enhance public safety and fairness while making the most efficient use of taxpayer dollars.
A recent report by the Legislative Finance Committee stated that reforms in the county’s criminal justice system “along with improving economic conditions in Albuquerque, may be impacting crime rates in a positive light. Albuquerque’s crime rate has been declining since November of 2017 through June of 2018.”
Between August 2017 and June 2018, the number of crimes in Albuquerque declined 49 percent for auto theft, 32 percent for burglary, 31 percent for robbery and 25 percent for rape, according to police department data in the LFC report.
Among the reforms cited by the LFC were procedural changes the council helped develop to speed up the resolution of felony charges in the county. The changes, which were approved by the state Supreme Court as the case management order, established deadlines for criminal cases to go to trial depending on a case’s complexity.
The average time for disposition of felony cases has dropped by more than 50 percent – from 11 months to 5 months – since implementation of the case management order in 2015, according to the LFC report issued last week. The disposition time is now in alignment with national standards.
LFC researchers stated, “The Bernalillo County criminal justice system is working towards improving swiftness and certainty of catching and holding criminals accountable.”
A 2013 law initially created the Bernalillo County Criminal Justice Review Commission, which later became the council, to make recommendations to improve the delivery of criminal justice and relieve jail overcrowding in the state’s largest county.
The average population at the Metropolitan Detention Center has dropped by half since criminal justice system partners began working together to implement an array of initiatives. Among the initiatives: the increased use of preliminary hearings for an early resolution of criminal cases instead of a much slower grand jury process, implementation of a risk assessment instrument to provide more information to judges in setting a defendant’s pretrial release conditions, and expansion of pretrial services with funds provided by Bernalillo County. The measures improve public safety in dealing with low-risk defendants who are released while awaiting trial. A 2016 constitutional amendment allows the detention of felony defendants who are proven to be too dangerous for pretrial release.
The council now operates under terms of a 2016 memorandum of understanding among criminal justice stakeholders. The members are: the city of Albuquerque chief administrative officer, chief judges at the Second Judicial District Court and Bernalillo County Metropolitan Court, the Bernalillo County district attorney, county sheriff, chief of the Albuquerque police department, county commissioner, district public defender, Corrections Department’s regional adult probation and parole administrator, director of the Administrative Office of the Courts, and the president or other representative of the New Mexico Criminal Defense Lawyers Association.
More information about the BCCJC and its work is available online.
Former Justice Cháves will continue to chair a separate group that is developing a strategic plan for improving criminal justice and public safety in New Mexico.
The Criminal Justice and Public Safety Task Force, which was created in response to measure approved by lawmakers, is to submit a report to the Legislature later this year.
Menu
LOS ALAMOS