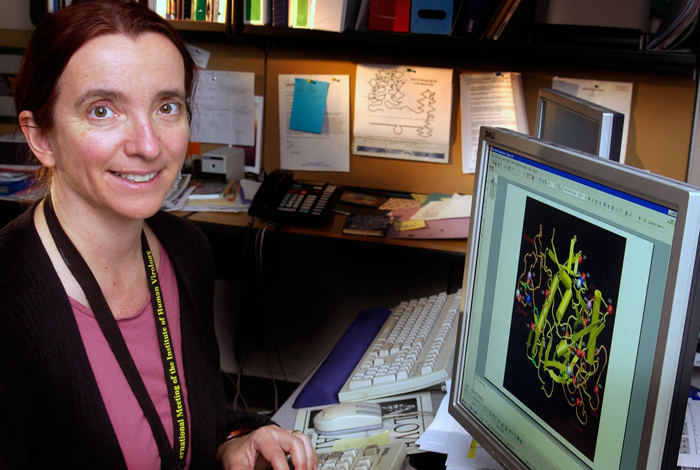 The viruses that successfully pass from a chronically infected person to a new individual are both remarkably resistant to a powerful initial human immune-response mechanism, and they are blanketed in a greater amount of envelope protein that helps them access and enter host cells.

These findings will help inform vaccine design and interpretation of vaccine trials, and provide new insights into the basic biology of viral/host dynamics of infection.

Because HIV evolves so rapidly and so extensively, each person acquires and harbors a complex, very diverse set of viruses that develops over the years of their infection.

The key discoveries here are the specific features that distinguish those specific viruses which successfully move to the new host, compared with the myriad forms in the viral population present in a chronically infected individual.

“The viruses that make it through transmission barriers to infect a new person are particularly infectious and resilient,” said Los Alamos National Laboratory scientist Bette Korber. “Through this study we now better understand the biology that defines that resilience.”

The team set out to determine whether the viruses that were successfully transmitted to a new patient might share distinct biological properties relative to those typically isolated from people with long-term, chronic infection.

To do this, the group at U Penn cloned a set of intact viruses from acute infection, and a set of viruses from chronically infected people, and characterized them by measuring quantities that might be related to the virus’s ability to successfully establish a new infection.

They discovered several clear correlations. For example, transmitted viruses were both more infectious and contained more protective “envelope” per virus; envelope is the protein the virus uses to enter host cells.

The team identified an additional interesting property that could be a general characteristic of new viral infections: the transmitted HIV was capable of replicating and growing well in the presence of alpha interferon.

Alpha interferon production is part of our innate human immune response to a new infection. As soon as a new viral infection is initiated in our bodies, local immune cells at the site of infection start secreting molecules called cytokines that have general antiviral activity and can inhibit the production of the newly infected virus. Alpha interferon is one of these potent cytokines.

In the early days of an HIV infection, this innate immune response increases to an intense level, called a “cytokine storm,” which gradually recedes during infection.

For a newly transmitted HIV to successfully establish infection, it must grow and expand in the new host while facing this cytokine storm.

Although typical chronic viruses are sensitive to and inhibited by alpha interferon, transmitted HIV-1 viruses grew well in the presence of interferon.

Los Alamos scientists Elena Giorgi, James Theiler and Bette Korber were part of the analysis team working closely with investigators at the University of Pennsylvania, Nick Parrish and Beatrice Hahn.

The paper, “Phenotypic properties of transmitted founder HIV-1” is in this week’s issue of Proceedings of the National Academy of Sciences.