ALBUQUERQUE—New Mexico has seen small improvements in some areas of child well-being over the last few years, but those gains are counteracted by declines in other areas.

For 2015, the state’s national KIDS COUNT® ranking stays at 49th—unmoved since last year—in the new edition of the KIDS COUNT Data Book, which was released today.

The national KIDS COUNT Data Book, released annually by the Annie E. Casey Foundation, ranks the 50 states on 16 indicators of child well-being that fall into the categories of Economic Well-Being, Education, Health, and Family and Community. As with last year, New Mexico is ranked 49th. The state had dropped to 50th in 2013.

“Child poverty continues to increase in New Mexico, and that does not bode well for the future of our state,” said Veronica C. García, Ed.D., executive director of New Mexico Voices for Children, which runs the KIDS COUNT program in New Mexico. “If we want to tackle child poverty then we must see more effort in improving educational and health outcomes. Healthy and educated children will have a fighting chance of moving out of poverty,” she said.

New Mexico’s child poverty rate was 29 percent in last year’s Data Book (using 2012 data). That has risen to 31 percent in the new report that uses 2013 data. Similarly, the percentage of children living in high-poverty areas increased—from 22 percent (2008-12 data) to 24 percent (2009-13 data). The long-term data are even worse. The number of children living in high-poverty areas has increased by 25,000 kids since 2006-10, and 27,000 more children live in families where no parent has full-time, year-round employment than did in 2008.

“Over the last several years we’ve seen 38,000 children fall into poverty in New Mexico. That is simply not acceptable,” Dr. García said. “Poverty has very detrimental effects on children. If we want them to succeed in life—to be the next generation of doctors, entrepreneurs, teachers and leaders—we need to ensure that they have the opportunities that will put them on the right path early in life.”

“The solutions to our child poverty problem are not rocket science,” Dr. Garcia said. “We know what works—ensuring that children have the high-quality care and learning experiences in the early years to support robust brain development, ensuring they can see a doctor and have enough nutritious food, and providing our schools and educators with the resources they need to do their jobs properly. These are ways to meet some of their basic needs. But we also must ensure that their parents have the opportunities they need to improve their own lot—from support for continuing education, job training, and child care to ensuring decent wages and earned sick leave.” 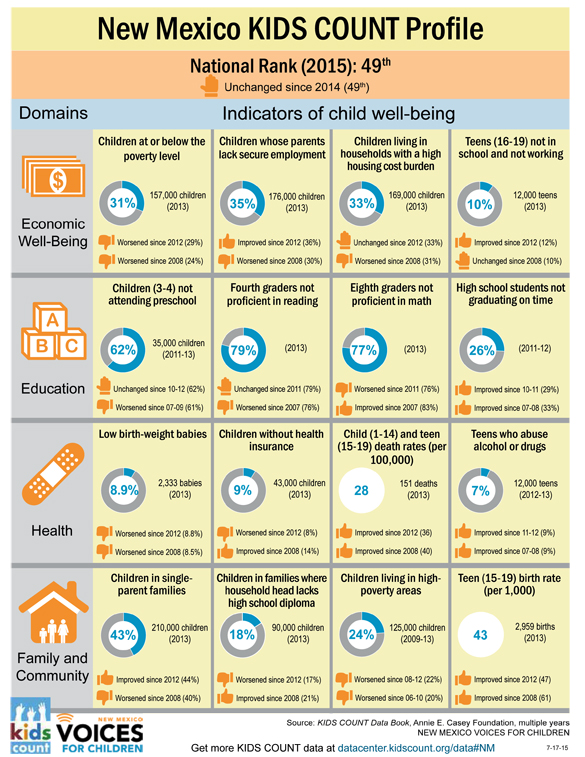