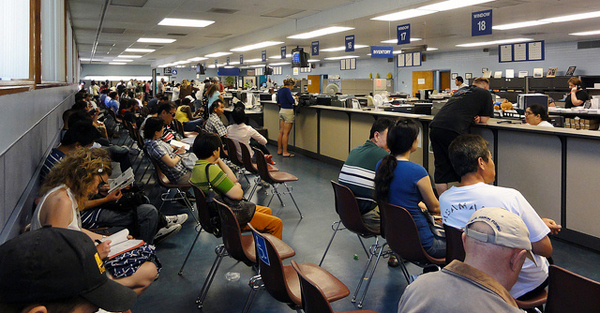 MVD lines are about to get a lot longer if a driver’s license proposal supported by Gov. Susana Martinez passes the state legislature this January, a national report of state legislatures says.

According to a report from the non-partisan, non-profit National Council of State Legislatures:

“To comply with the requirement that all DL/ID (Driver’s license or identification) card holders re-verify their identity with the state, individuals must gather and present all their identification documents, which may more than double the length of time they spend at their DMVs,” the report concludes.

“This standard will require an in-person visit by every current DL/ID holder as well as new applicants to review and verify all required identification documents and re-document information for the new license including place of principal residence, new photographs and new signatures.”

News reports from Nevada and Kansas, where a similar proposal was recently implemented, detail excruciating waits at MVD offices and residents having to go to extraordinary expenses and hassles to obtain new, certified copies of documents already verified by MVD for previous license issuance. This has been particularly hard on the elderly who do not have original copies of birth certificates or decades-old marriage documents needed to obtain new security clearances they will never use.

Read additional excerpts from the report, and more stories from across the country at progressnownm.org

“There is no need for the governor to require grandma who only drives to church on Sunday and the grocery store on Tuesday to go to the expense of getting certified copies of all these documents, just to stand in longer MVD lines to renew the driver’s license she’s had for 50 years.”

“New Mexicans who need to enter high-security areas like airports and our national labs should have the option to obtain these REAL ID cards or a passport or whatever ID they like to do their business; we shouldn’t require everyone to turn in a perfectly good license for one they don’t need just to help a few politicians fulfill a campaign promise that was unreasonable from the start,” he adds.

Earlier this year, federal authorities recently notified New Mexico that the state’s driver’s licenses may no longer meet federal requirements to access high-security areas including airports and higher-security federal facilities and that is setting up another showdown between the governor and legislative leaders over the proper fix.

Since taking office in 2011, Gov. Martinez has insisted that the legislature repeal a provision in the state’s license law allowing the issuance of driver’s licenses to undocumented residents. That repeal is not required by REAL ID.

Senate Democrat and Republican leaders passed a compromise fix last legislative session that would have allowed all New Mexicans to keep their current license while creating a new class of REAL ID license for applicants who needed the additional security components. Republican leaders in the House refused to consider it.

ProgressNow New Mexico is the state’s largest progressive public policy advocacy organizations with more than 100,000 subscribers statewide. It has offices in Albuquerque and Las Cruces.