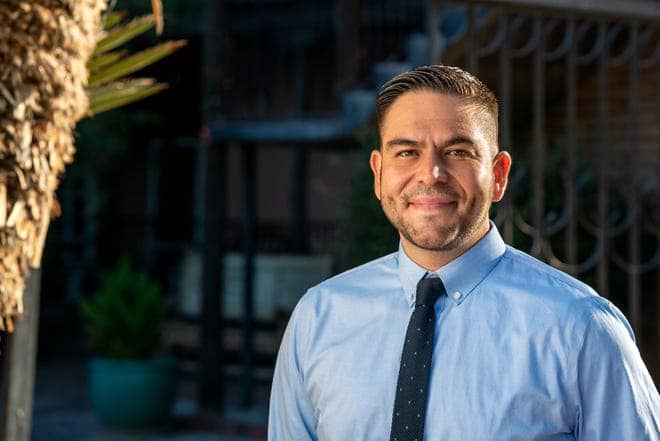 Congressional District 2 candidate Gabe Vasquez has a local connection in that he interned at the Los Alamos Monitor in 2008 while on summer break from college. Courtesy photo

New Mexico 2nd Congressional District Candidate Gabe Vasquez has a Los Alamos connection in that while on summer break from college in 2008, he served as a student intern at the Los Alamos Monitor newspaper. During his internship, he and then managing editor, Carol A. Clark, now of the Los Alamos Daily Post, covered Republican presidential candidate John McCain’s “Straight Talk Express” rally in Albuqueruqe.

“Gabe is the leader New Mexico’s 2nd Congressional District needs,” Leger Fernandez said. “Democrats are delivering investments in our rural infrastructure and broadband, lowering drug and health care costs, and making child care affordable and accessible. Gabe’s leadership fighting for small businesses and helping families on the Las Cruces City Council, and protecting New Mexico’s natural resources and public lands for future generations is the expertise we need in Congress. He knows the struggles of working families and puts solutions first. I am excited to work together to fight for the communities and the places that we all love. Adelante!”

Vasquez launched his campaign in September stating that his priorities included helping build a better, stronger, and more equitable economy for New Mexicans, providing affordable, high-quality health care for all, and protecting New Mexico’s natural resources for future generations. He quickly gained the support of leaders across New Mexico and beyond.