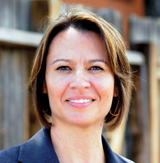 In a ceremony held at the Hispano Cultural Center Wednesday, hosted by New Mexico First, Dist. 43 Rep. Stephanie Garcia Richard was awarded the Spirit of Bipartisanship Award for “Excellence in Education”, recognizing her legislative efforts in reaching bipartisan compromise and agreement.

“In an era defined by extreme partisanship, I always look for opportunities to reach across the aisle and work with our fellow citizens, no matter their party. In politics, bipartisanship is sometimes seen as a weakness. I’m grateful that NM First recognizes the courage it takes to put country before party. I’m honored by this recognition,” Garcia Richard said.

The award ceremony in Albuquerque included a guest appearance from former U.S. senators Tom Daschle and Trent Lott talking about their co-authored book, “Crisis Point: Why We Must–and How We Can–Overcome Our Broken Politics in Washington and Across America. The talk was moderated by veteran journalist, Sam Donaldson.