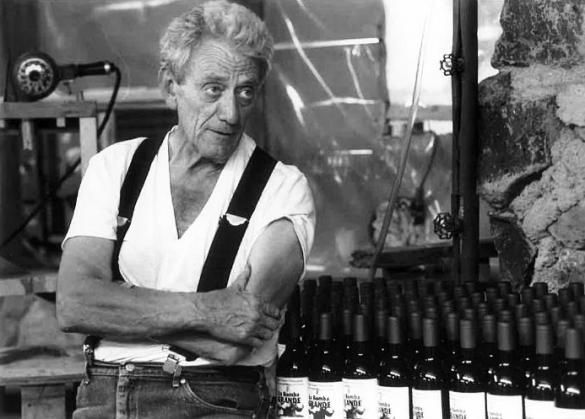 John Balagna’s many friends who have shared wines with him over the years will all hoist a glass to his memory this week. Courtesy/Tom Hill
By THOMAS R. HILL
Los Alamos

John, being of Italian heritage and a chemistry background, took an early interest in wine, both in its drinking and making. His father reportedly had some of the first Nebbiolo grapes grown in the USA up in Brookside, Colo. John described himself as a “messy Italian” and his rustic wines reflected that trait.

From his arrival to the Manhattan Project in early 1943, he always had a batch of home brew going. When he moved to his new home in Pajarito Acres, he planted one of the first vinifera vineyards in Northern New Mexico on his front property. With John Lilley, he planted a much larger vineyard in nearby San Ysidro.

In the early ’70’s, John went on to become one of the founding directors of the New Mexico Vine & Wine Society. This group encouraged the planting of wine grapes and making of wine throughout New Mexico. This group, in fact, is largely responsible for the success of the current New Mexico wine industry.

When I came to New Mexico in 1972, the (aptly named) Tony Gross Winery in Bernalillo was the only existing winery. New Mexico now counts more than 40 wineries in the business.

With his retirement from the Lab in 1986, John became a commercial winery under the name Balagna Winery/Il Santo Cellars. He built the winery on his property with large stones hauled out of the Jemez, with the winery below and a tasting room above adjacent to the sculpture studio he made for his wife, Jean.

He continued to make wine until he closed the operation in 2008.

John’s real claim to vinous fame came from his La Bomba Grande wine. For the Lab’s 50th Anniversary celebration in 1993, John created a red blend that he gave to all the attendees at the celebration. The label depicted the Trinity shot mushroom cloud (which John actually viewed from atop Sandia Peak). It was such a success that he continued to make the wine for commercial sale. It even rated a small feature article in both Newsweek and Parade magazines.

Supposedly, a number of bottles of La Bomba Grande made it to the Soviet Union’s weapons laboratory in Sarova and even some bottles wound up with the enemy in Livermore. John took a secret delight in how well this “politically incorrect” label sold down in Santa Fe. Proud of his Italian heritage, he also made a rustic red blend that he labeled “Dago Red”.

John had a wicked sense of humor. During the Don Kerr years at the Lab, he had printed up for friends some bumper stickers that pleaded “Please Come Back, Harold”, in reference to the director Harold Agnew, under who John worked after the Norris Bradbury era.

In his later years, John continued to be an avid wine drinker with Riesling and Nebbiolo his particular favorites. And he was a keen observer of the growth of the New Mexico wine industry. He also mentored a number of local home winemakers, including Tony Fox who has continued John’s La Bomba label and Ron Dolin of the Don Quixote Distillery and Winery.

John’s passing last week leaves a huge whole in the local wine community, many who have shared wines with him over the years. We will all hoist a glass to his memory this week.