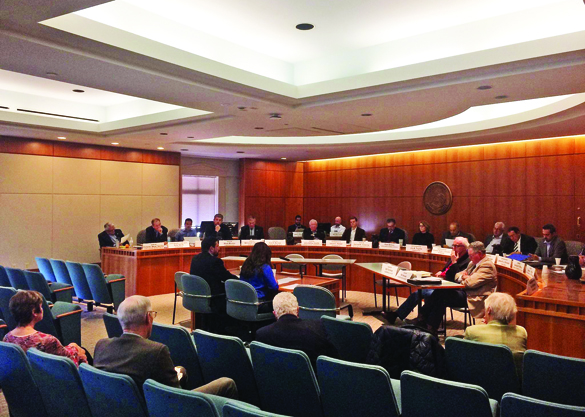 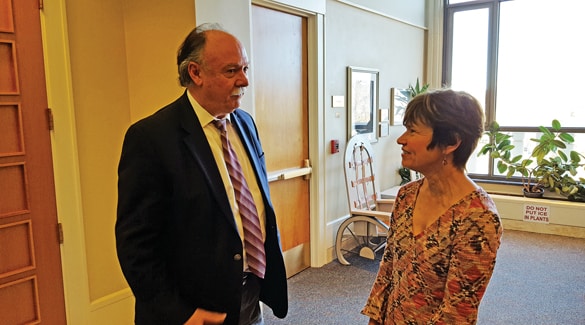 By MAIRE O’NEILL
Los Alamos Daily Post
maire@ladailypost.com
The Regional Coalition of LANL Communities Board is concerned that if a not-for-profit such as the University of California or the University of Texas is selected by to manage and operate the Los Alamos National Laboratory beginning in October 2018, the State of New Mexico will lose some $25 million in gross receipts taxes (GRT).

Coalition Executive Director Andrea Romero and Santa Fe Mayor Javier Gonzales, chair of the Coalition board addressed the Revenue Stabilization and Tax Policy Committee Tuesday in Santa Fe as the Coalition prepares to push the GRT issue in the 30-day session of the Legislature in January.

The State presently receives some $76 million in GRT and to protect this revenue and for some months the Coalition has been urging the elimination of the non-profit exemption that is currently available to any not-for-profit prime contractor of a Department of Energy/National Nuclear Safety Administration laboratory operating in the state. Romero believes elimination of the exemption will stabilize the much needed revenue stream generated by LANL and Sandia National Laboratory (SNL).

Romero says that although Sandia is presently operated by a for-profit limited liability corporation selected by NNSA in 2016, credible not-for-profit entities submitted proposals to operate SNL during its recent contract re-compete. She believes it is reasonable to expect that not-for-profit entities will continue to show interest in SNL in future contract competitions.

Romero says the 2018 Defense Authorization Act as currently drafted supports a study of a not-for-profit model for the DOE/NNSA national laboratories and that many view this as a step toward advancing the policy goal of establishing a not-for-profit laboratory management model.

In February, House Bill 332 sponsored by Rep. Stephania Garcia Richard cleared the House Business and Industry Committee. The bill sought to remove the GRT exemption for non-profit prime contractors. It got caught up in other legislation related to overall GRT reform and did not go any further.

​Los Alamos County Councilor Chris Chandler who is secretary of the Coalition Board, said Romero and Mayor Gonzales did an excellent job at Tuesday’s meeting in explaining the need to maintain the tax revenues from current Lab operations. She said Committee members raised legitimate tax policy questions with many expressing support for the need to maintain the revenue stream.

​“Several raised technical and policy questions that we will need to address before we can expect the bill to receive full support from the Committee,” Chandler said. ​“This is an important issue for the community, region and State. The Council will continue to work closely with the Regional Coalition on this issue before and during the legislative session.”

​Romero read a statement from Council Chairman David Israelevitz to the Committee saying there is a potential for substantial destabilization of the significant revenues that both the State and the local entities collect from the operation of the Laboratories each time the federal government reconsiders its management contract.

​“While demand and cost for the services provided to the contractors of each of these Laboratories dies not change when the managing contractor of a National Laboratory transitions, there does exist the risk of significant revenue destabilization if a contract transitions from a for-profit to non-profit, i.e. non-taxable contractor,” the statement said.

​“Our communities value their partnerships with the Laboratories, their employees, opportunities and challenges, and we desire to be able to continue providing an appropriately supporting environment to the Laboratories,” Israelevitz’s statement said. “The County of Los Alamos strongly endorses the proposed legislation. 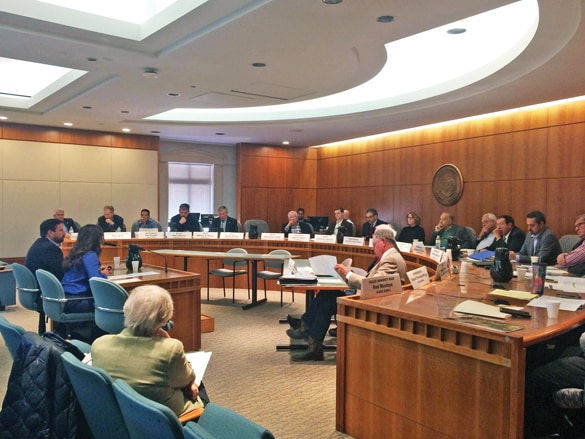 Scene from Tuesday’s meeting on the LANL GRT issue in the State Capitol. Courtesy photo