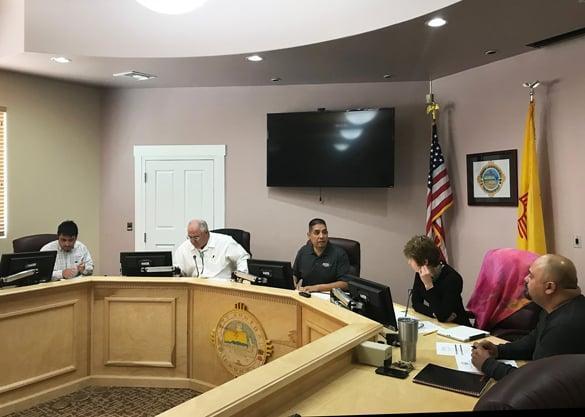 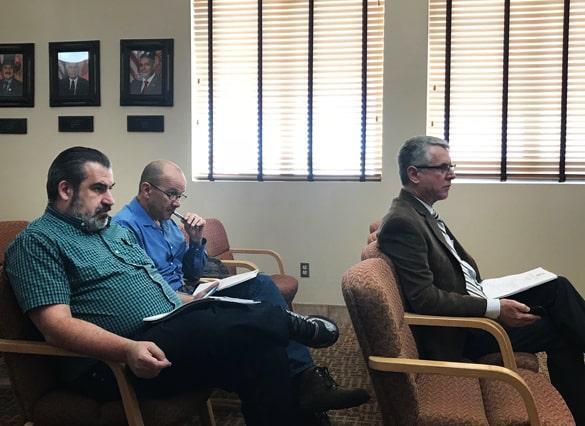 The agenda included reviews of the Coalition’s joint powers agreement (JPA), by-laws and a draft request for proposals (RFP) for recruitment of an executive director.

Chandler asked if the board could establish a subcommittee to work with the attorneys to come up with a revised draft for review at the next meeting that’s “more specific to all parties”. Trujillo said he felt it was appropriate that the County of Santa Fe and the County of Los Alamos having already handled the process, take a lead role. When Ives expressed an interest in serving on the subcommittee board members agreed to include the City of Santa Fe.

Roybal suggested adding terms to the JPA that would prevent the executive director from being an elected official. Trujillo suggested a moonlighting clause such as Rio Arriba has to prevent their county manager from seeking elected office.

Roybal also mentioned the possibility of revamping the name of the Coalition.

“I really have a lot of constituents that don’t really know what the Coalition does, and I feel that if we revamp the name to where it sort of explains that in the title, I think that would help for community members to understand the type of organization we are. So, I think we should look at a name that’s a little more descriptive,” he said.

Chandler said she doesn’t necessarily disagree, but she thinks that the board needs to be clear that the relationship that binds the entities together is their interest in advocating on issues that they share related primarily to Los Alamos National Laboratory.

“That was how we founded ourselves, that was what the JPA was geared at. To suggest we are not tied to the Lab is not appropriate for a correct description of us,” she said.

The board returned to discussion of the executive director’s role. Ives said he thought the work of the Coalition is “significant enough to warrant fulltime attention and care” by whoever is selected into that position.

Trujillo said that in terms of outside activity and making sure the commitment is completely to the coalition and its efforts to bring advocacy to the region, his recommendation would be that “the entity who gets the contract would be able to commit fully to our entity”.

Chandler suggested that she work with Los Alamos County to craft some language for the RFP to be circulated prior to the next board meeting. She said she wanted to bring something to the board’s attention with regard to Los Alamos County’s review of reimbursements.

“If you recall, there was about $2,200 identified as payments that were not in line with the policy that had been made to the executive director. And I’m sure you all have seen communications from our former executive director indicating her willingness to repay that money,” Chandler said. “We owe the executive director under her contract her two outstanding monthly fees of about $11,000 per month that have not been paid. I would like to suggest that we debit the $2,200 from the amount we owe to facilitate her repayment of the sums that she has expressed a willingness to repay.”

Councilor Ives said at some level anybody who traveled who was subject to receiving the benefits from those payments.

“I would like to call on all of our respective entities to somehow acknowledge that. I hate to put the burden on the executive director when clearly the fault for these issues falls in my mind certainly very much there but on many other shoulders. I’m not sure how to do that in any effective way. That’s my one challenge,” Ives said. “If it came to alcohol consumption on trips that was prohibited, that’s something we all at some point at some level have to bear some responsibility for.”

Ives said that as treasurer he will propose to undertake a review of the board’s procurement and travel policies as well trying to do “some very positive training and education” of the entire board and staff on those issues to try and ensure that “those types of issues don’t occur again”.

Chandler said she guessed she disagreed a bit with that announcement.

“The question is who submitted the requests for reimbursement. The individuals who were present at the dinner did not submit any requests for reimbursement and to me it’s the person who submitted the request who owes us the reimbursement. If that person wants to go request the participants to pitch in or reimburse her, that’s her prerogative,” she said. “I wasn’t, as you know, on any of those trips to be clear, so I don’t know who was involved in imbibing. It’s not improper to have alcohol, it’s improper to request reimbursement for alcohol. Those individuals may not have known how that bill was being handled.”

Ives said on that point he suspected Chandler was exactly correct and that as he indicated, that his is a way to resolve the problem that is acceptable to everybody.

“I don’t see that there is any reason that we shouldn’t move it forward and simply note some shared responsibilities that as members we all need to be informed as well,” he said.

Chandler said she really appreciated Ives’ comment about training and that it would be great if the board could get their policies up to snuff and then in an open meeting have training for everyone so they would know the right thing to do moving forward.

On the agenda item on legal needs, Chandler suggested getting the JPA to where the board wanted it to be, which hopefully will be within the month, get it approved by all the participating communities because of the modifications, and then talk about legal support because the suggestion had been made that there has been some question about the degree of authority under that JPA to hire.

“So, it seemed to me cleaner if we get the JPA in place and then we can talk about hiring some legal assistance as needed. I do think it would be good to have someone on contract on as needed basis not constant because once in a while we may have a legal question that the participating entities’ attorneys don’t feel comfortable answering because there’s not an attorney-client relationship,” she said.

Burgess agreed to bring a resolution on open meetings for adoption by the board.

“I’m sure all of you annually adopt an open meetings act resolution and it was brought to my attention that we have not done that on a regular basis,” he said.

Also, on the agenda was consideration of an April trip to Washington, D.C. for a meeting with ECA and with legislators. Chandler suggested that the board authorize up to two members.

“I think given the controversy that has surrounded the Coalition its important to interact with the usual collection of people that we talk to so that they understand that it’s our intent to continue, perhaps answer any questions that they have about what issues have been raised and make sure they understand we intend to move forward with the coalition as best we can and if we don’t go I think we’re sending the wrong message,” she said.

Ives said he would certainly agree that continued participation at meetings in Washington advocating on issues such as continued clean-up is always significant, so he concurred that attendance is important, whether it’s two or three board members.

Burgess discussed the board’s desire to adhere to obligations under the contract with the prior executive director including monthly payments owed at that time and which due to a variety of events had not been paid.

“I wanted to clarify with the board that we are to proceed with those payments. Technically the contract called for the executive director to directly submit her invoices to the County and the County would pay them and there was really no provision to bring them back in front of the Coalition.

“But given all the issues that were raised, I’d appreciate confirmation of that from the Coalition – payments of the two monthly invoices for January and February this year to the end of the contract,” Burgess said.

The board voted to pay the first month after deducting the $2246. Chandler said she would send Romero an email saying what the board wanted to do and she doubted there would be any objection in light of the fact that the executive director has said she is willing to pay the money back.

The second payment was then approved subject to review of an additional four months under Romero’s contract to proceed as quickly as practicable and that once that determination is made, any additional amount of that second payment not subject to potential recoupment be paid out in a timely fashion.

Under public comment, Devin Bent of Nambe said as he read the rules that apply to this Coalition it seems to him that they prohibit the reimbursement of expenditures for guests.

“There were a lot of guests present at these things and I didn’t see that brought out in the review by Los Alamos County. I think that is a serious issue. One of the purposes of this group is to influence the Department of Energy (DOE) in its decisions.

“You take a bunch of DOE officials out to a baseball game, give them a gift in excess of what they’re allowed to accept, is that a problem? I think there are serious matters that have not been brought up,” Bent said. 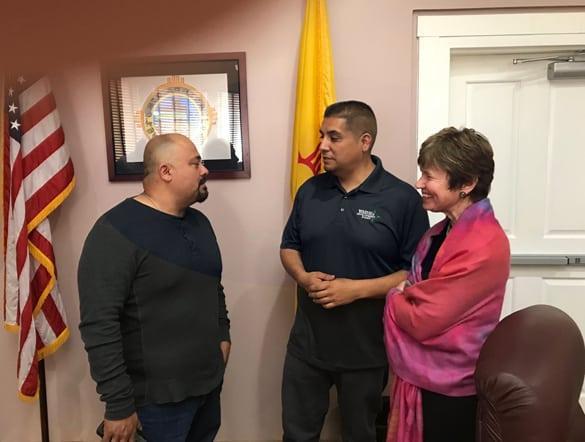 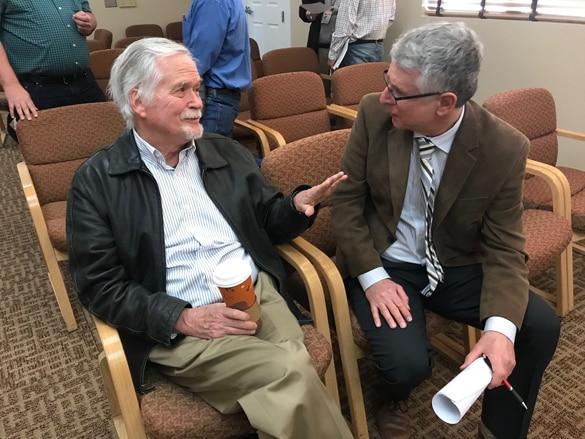 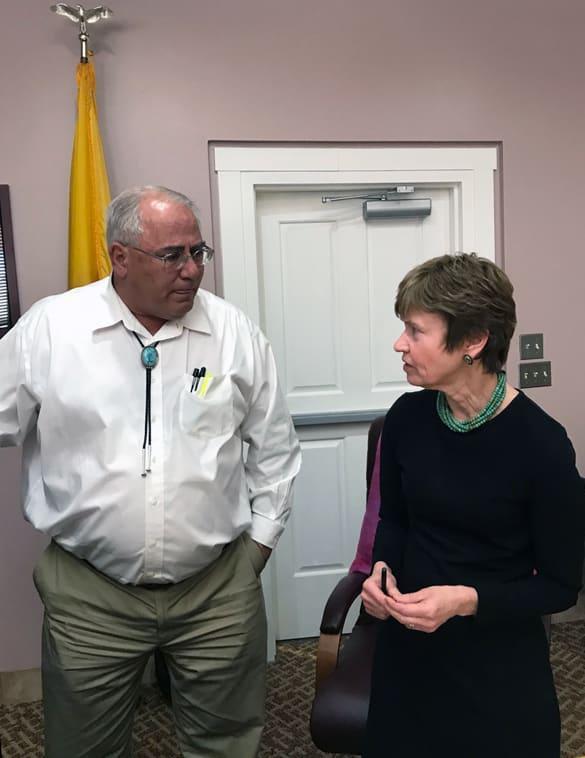