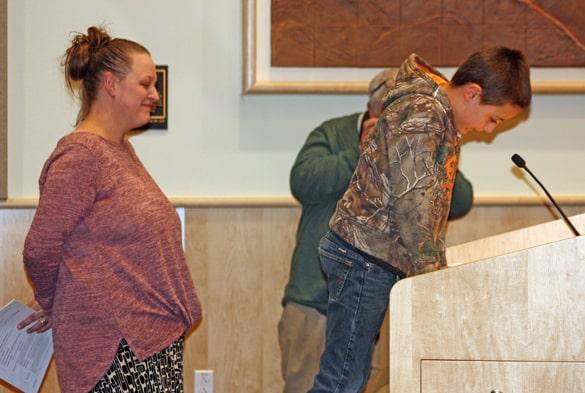 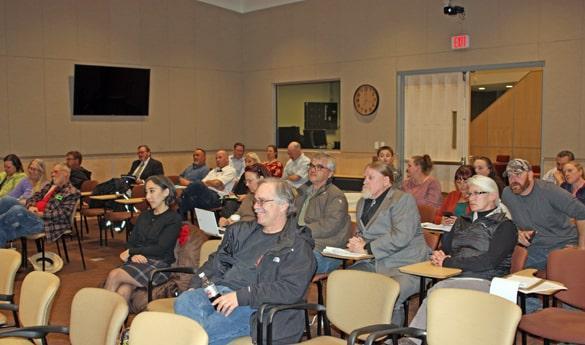 Residents gather in Council Chambers to share their thoughts on the code enforcement program. Photo by Kirsten Laskey/ladailypost.com
By KIRSTEN LASKEY
Los Alamos Daily Post
kirsten@ladailypost.com
Reforming the Los Alamos County code enforcement program took a step forward Tuesday night during the County Council meeting.
The Council voted 5-0 to direct staff to place three proposals identified as attachments A, B and C on the earliest possible agenda for Council’s consideration. Councilors David Izraelevitz and Pete Sheehey were absent from the meeting.
These proposals would act as a start to revising the code enforcement program. Furthermore, a number of councilors expressed reservations about aspects of the proposals and offered suggested changes so it was approved to create a council committee consisting of Councilors James Chrobocinski and Antonio Maggiore to work with the County Manager to finalize changes to the proposals.
Chrobocinski crafted the proposals along with Citizens in Action members Helen Milenski and Heather Ortega.
Tuesday night, he described what attachments A, B and C would entail.
Chrobocinski explained he brought up the proposals due to concerns he and others in the community feel toward the program. Chrobocinski said last year council approved an ordinance to increase enforcement of the code and while he said “I think we did this with the intent to make this a better place to live,” it didn’t turn out as he expected.
Chrobocinski said none of the proposals were set in stone and he was willing to compromise on things. The purpose was to have a discussion and move forward on a consensus to revising the code enforcement program.
While some Councilors questioned the purpose of suspending the code enforcement program  for 90 days and some felt extending the response time on a notice of violation to 14 days was too long, creating an advisory citizen committee received strong support.
Councilor Susan O’Leary said she felt forming the citizen board was a great idea. She said the County needs citizens’ input as decisions are made and residents’ eyeballs are needed to look at specific policies and codes.
O’Leary felt the citizen board could be an advisory body but she felt it could do other things as well. The board could serve as a point of contact for citizens who want to see changes and improvements to policies. It could also be a point of contact for those who have trouble maintaining their property. O’Leary said she felt the board could look at six months worth data, identify failure points, inform the council so it can make policy changes that would provide permanent fixes.
She added she felt everyone in Los Alamos wants the town to look good. This board could help with the beautification process. For instance, it could offer opinions on how the County landscapes and provide advice on what to purchase and install.
Council Vice Chair Christine Chandler said there is a need to look beyond just code enforcement and look more broadly to creating a property maintenance program.  She also supported the citizen advisory board. Additionally, she said the County’s code needs to be improved.
“We have a poorly crafted code,” Chandler said, adding that it is Council’s fault.
Chandler pointed out the code is full of ambiguities; for instance, there is no definition of a weed in the code. It’s not fair, she said, to expect residents to follow a code that lacks specificity and is generic. Having a citizen committee could help things.
Chandler said the board could help bring County and residents together with common goals.
“I think a committee that is advisory could help with developing a program that reflects community values,” she said.
Chandler felt the board could serve a larger purpose as well: help Los Alamos reach its full potential.
“This town could be an incredibly cute town … I really would like to see that happen. We have the foundation for something that could be quite beautiful,” she said.
Maggiore said he too liked the idea of the board and felt it should work with Community Development Department to focus and steer enforcement efforts.
Members of the public who spoke during the meeting strongly advised the council to make changes in the code enforcement program. They also spoke in favor of the citizen board.
Chris Luchini said he reviewed notices of violations that had been issued and some were “absurd,” adding, “This is exactly why people are so pissed off.” He said the citizen board is necessary because there needs to be buffer between the public and the County staff.
Milenski also said it is time to end the frivolous notice of violations. She too felt the board could serve as a buffer.
“A board is a voice for the community. It can be buffer between the citizens … as well as the CDD,” Milenski said.
Menu
Los Alamos
75°
Sunny
5:48am8:22pm MDT
Feels like: 75°F
Wind: 12mph S
Humidity: 28%
Pressure: 29.89"Hg
UV index: 8