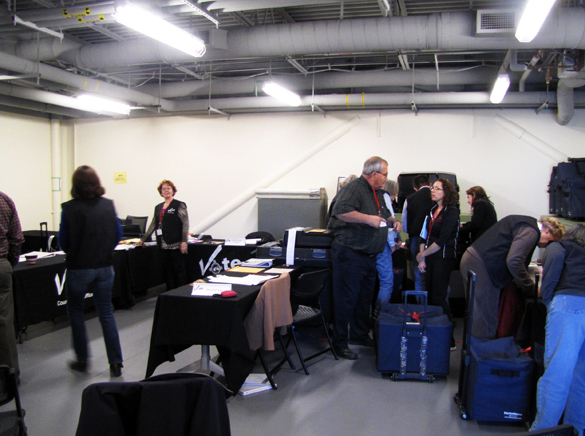 A recount is underway this morning in the Los Alamos County Clerk’s warehouse at 1000 Central Ave., for the Commissioner of Public Lands race. Clerk’s at all 33 counties across New Mexico are conducting recounts of this race today. Photo by Chris Clark/ladailypost.com

Los Alamos County Clerk Sharon Stover announced Wednesday that her office received notice from the Secretary of State that an agreement was reached by all parties, allowing the stay to be lifted on the automatic recount for the Commissioner of Public Lands race.

The New Mexico Supreme Court has officially lifted the stay and the State Canvassing Board (Governor, SOS and Supreme Court Justice) has issued a 20-page amended order for the statewide recount. County Clerks, at all county seats across New Mexico, are required to begin the recount process at 8 a.m. today and shall continue until completed.

In Los Alamos, the county seat of government is the Municipal Building, and the recount is underway in the Clerk’s Warehouse located on the westside of the building by the loading dock. Stover said Wednesday that the official amended order triggers a notification process that she began implementing immediately. That process includes sending notices by registered mail of the date for the recount to the district judge for the County, the absentee board members who participated in the November General Election, and the chair of each political party.

The County’s absentee board members used for the General Election, who are tasked with this responsibility, included five residents (Michael Wheeler, Audra Short, Deanna Brooks, Kim Thomas, and Makaela Jones). However, the process permits Stover to appoint additional members in order to accommodate the recount. She said Wednesday that she planned to appoint another seven members to accommodate the process.

Team members at each of the five tabulators that will be used during the recount must be an equal representation from the Democratic and Republican parties, but the remaining precinct board members can be Independents or Declined to State, with the names of the recount precinct board to be submitted to the SOS no later than Noon, one day prior to Day 1 of the recount. Due to availability, the following individuals have been appointed: Michael P. Sanchez (Presiding Judge) [R], Audra Short [D], Laura Pocaterra [R], Kim Thomas [DTS], Stephen Ciddio [D], Peggy Pendergast [R], Shirley Graziano [D], Terry-Lee Fitzpatrick [R], Linda Fox [D], Mary Wilhoit [R], Jess Cullinan [D] and John Fitzpatrick [R]. District Court Judge Sarah Singleton has appointed George Chandler as her Designee.

Specific provisions to conduct the recount were outlined in the order, Stover said Wednesday. The order is attached to this press release for media review and has been uploaded to the Clerk’s webpage for public review as well. Stover said this process is quite complicated, as outlined in the order, and includes activities such as: utilizing red and blue pencils and ballot sorting activities. To test the accuracy of each tabulator, 100 ballots of each ballot type (absentee, early, election day) shall be hand tallied by the recount board prior to being fed into each tabulator. All of this is further complicated by citizens being called upon to work with the County Clerk to complete this process.

The Secretary of State, through its vendor Dominion, provided and tested the servers and removable media (Compact Flash Cards) Friday, Dec. 5, to be used for the recount. Costs for poll workers and materials used for the recount will be paid for by the State of New Mexico as a reimbursement to counties. However, staff time is excluded for reimbursement. The SOS estimates the total cost of the recount to reach $200,000.

Click here to read the recount for the Commissioner of Public Lands race.