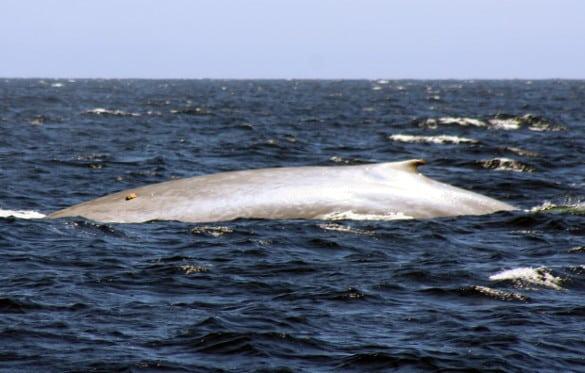 A blue whale surfaces off the coast of Southern California, showing the attached tag that records its calls and pressure changes during dives. Researchers use these tags to explore behavioral links between diving and song production. Courtesy/Ana Širović.
AGU News:
PORTLAND, Ore. — Researchers are using underwater microphones to interpret and characterize the calls of blue whales swimming through Southern California’s oceans, revealing new insights into the behavior of these endangered marine mammals, according to new research being presented at the Ocean Sciences Meeting here on Tuesday.
Stretching nearly 30 meters (100 feet) long and weighing up to 172 metric tons (190 short tons), the endangered blue whale is the largest animal known to have existed. Though the exact purpose of blue whale vocalizations remains elusive, researchers think the whales may use calls to maintain distance between one another, facilitate mating or signal the presence of prey, among other purposes.
To better understand these vocalizations, scientists recorded and analyzed more than 4,500 sounds from blue whales tagged with underwater microphones and pressure sensors in and around Southern California’s Channel Islands between 2002 and 2016. Listen to a recording of two different whale calls here.
The new research compared three types of calling behavior with different diving patterns to uncover behavioral links.
The researchers found some variability in the times and under what conditions whales call or sing. The vocalizations varied depending on the whale’s sex and the dive’s purpose – behaviors with some similarities to other animals, according to Ana Širović, an oceanographer at the Scripps Institution of Oceanography in La Jolla, California, who will present the new findings Tuesday at the 2018 Ocean Sciences Meeting, co-sponsored by the Association for the Sciences of Limnology and Oceanography, The Oceanography Society and the American Geophysical Union.
“Understanding the context under which blue whales make calls is a critical step in developing non-invasive, non-lethal acoustic methods to study population trends and recovery status of this endangered species,” Širović said. “And as a species on top of the food web, understanding their status and contribution to the ecosystem is important for understanding the status of the ecosystem as a whole.”
The researchers found male whales were chattier at night, when it seemed the animals weren’t feeding. Males produce more calls than their female counterparts, Širović said, indicating some of the calls may aid in reproduction.
The researchers noticed great variability in the male whales’ use of single sounds, as opposed to songs composed of multiple sounds strung together. Other researchers have suggested these single calls could help maintain pair-bonding when males and females meet while foraging.
Male bonobo chimpanzees employ a similar strategy, calling to nearby females when food is present, which boosts their chances of mating.
The researchers found dive behavior varies with the seasons, when whales spent more time in shallow waters during late summer and early fall. This may mean whales are hunting for more surface-dwelling prey at those times or traveling, according to the researchers.
The rate at which calls are produced varied within the time of day as well, where song production was highest at dusk and lower during the day. This could be because the whales time their singing for periods when prey is less densely aggregated, though the researchers did not measure prey abundance. A similar, energy-conserving behavior has been observed in European robins and nightingales, who adjust their singing in line with their energy reserves.
A shorter, less far-traveling call past researchers had associated only with foraging behavior seemed to be more socially complex than previously thought. Both males and females used this call during non-feeding dives, leading Širović and her colleagues to suggest it may serve as a close-range call to communicate only with nearby whales.
The research represents the most extensive analysis into the behavioral context of blue whale calling in the region, according to Širović.
Menu
Los Alamos
72°
Fair
5:48am8:24pm MDT
Feels like: 72°F
Wind: 8mph NE
Humidity: 19%
Pressure: 30.23"Hg
UV index: 2
SunMonTue
90/66°F
82/59°F
90/64°F
Weather forecast Los Alamos, New Mexico ▸